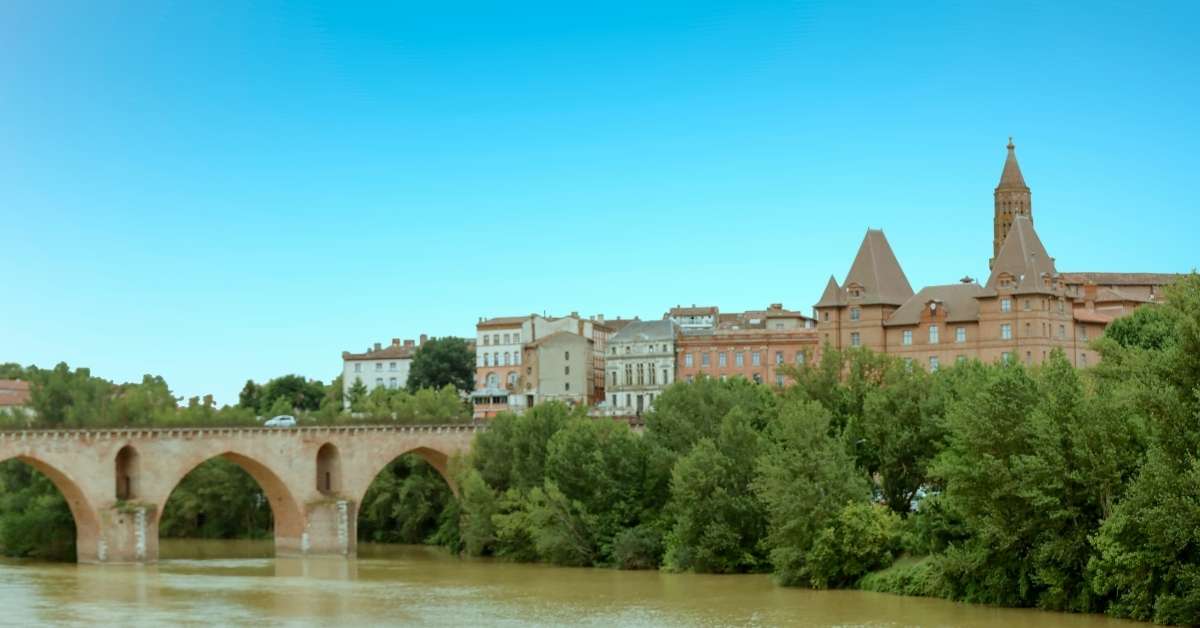 Are you thinking about making a stop in the city of Montauban in Occitanie? Annie Sargent and Elyse Rivin make a stop in Montauban today and share their insights about this town in the southwest of France. Montauban is a city with lots of history and some recent controversy. Should you put it on your list? It's definitely off the beaten track and that's a plus to many people. Take a listen to decide for yourself if you'd like to check it out!

If you have time for nothing else, here's what you should put on top of your list in Montauban:

For Americans planning to visit France in Aug or Sept of 2021: Information on how Americans can get a QR code starts 59 minutes into the episode.

This is the Sherpa site where you can see up-to-date information on what it takes to travel to France from your country. It also explains what you'll need to return home AND lets you print travel documents.

What to See and Do in Montauban

Walk around the old city center and take in the feeling of this old brick city.

As you walk around the old center, pass in front of the church of St Jacques, the oldest church in Montauban. Look closely as the brick façade and notice the holes left by small canons, and bullets left by the War of Religions, the Revolution and from WWII.

Visit the National Square, famous for its architecture, its arcades and its bricks. There are many cafés and restaurants on the square and there is a wonderful market on the square Wednesdays and especially Saturdays.

Visit the Ingres-Bourdelle Museum. Housed in the ancient bishop’s palace, overlooking the Tarn River, the museum has a small medieval collection in the vaulted basement, and a huge collection of drawings and paintings by Ingres, one of the most important artists of the early 19th century in France. There is also a collection of sculpture by Bourdelle, including his bronzes. Both artists were from Montauban. Ingres, who has many of his works in the Louvre, left a huge collection to his native city, including memorabilia and his sketchbooks.

Visit the Cathedral Notre Dame de l’Assomption a baroque cathedral built in 1692 one of the last major cathedrals to be built in France. (Temporarily closed for structural work)

Walk along the banks of the river and get a good view of the city up above and the ancient medieval bridge with its lovely arches.

Picnic along the Tarn river.

Montauban is close to some interesting areas: the Gorge de l’Aveyron, the region known as the Quercy, the Abbey of Moissac, the Gers countryside and many small villages and bastides.

Montauban is a city of 66,000 people that is 55 km (34 miles) north of Toulouse. It is the main city of the Tarn and Garonne department.

Known as one of the brick cities, along with Toulouse and Albi, it is very old and has a long and rich history.

It has the label of City of Art and History thanks to its museum, The Ingres Museum, and to its old historical center filled with beautiful buildings made with the red-orange Roman brick like Toulouse and Albi.

It is reachable easily by car or train from either Toulouse or Bordeaux and by car from Albi.

A Brief History of Montauban

It began as an ancient medieval city built on the banks of the Tarn River as it joins up with a smaller river called the Tescou.

The name of the city, Montauban, comes from the Latin (mont albanus) for white mountain apparently because the hill where the town was first built way back in the 1100’s was covered with lovely pale leaved willow trees. And also because there was already a large Benedictine Abbey down below by the river that was called the Mont Doré – the golden mountain its founder wanted to make the name pretty too.

Records do show that the first urban settlement there was an important Abbey created in the 800’s under the rule of Charlemagne and his sons, The Abbey de Montauriol. As was often the case when an important abbey was built, little houses for the lay people would be built up around it.

But Montauban as a town didn’t exist until 1144 when the Count of Toulouse, Alphonse Jourdain, who was the ruler of this area, decided to build a “new” town, from scratch. The charter for this town indicates that it was to be a new model for “urban” living and used the ancient Roman idea of a grid system. This was no fortified castle, but a town that was relatively flat, with ramparts and straight streets. It was built around a central square, which is still there, called the Place National.

In 1229 more than 80 years later, new towns called Bastides, started to be built everywhere in the southwest of France, mostly in Languedoc and Occitanie, and they took as their model the city of Montauban. The basic idea is that the center is the market place and the church is off to the side. A new idea for a growing trade and artisan class.

During the 1200’s and into the 1300’s Montauban was a very prosperous urban center, relying on the Tarn for the trade and commerce that made it rich. It was at this time that the church of St Jacques was built (1280) and the “new” stone bridge with lovely gothic arches (1304-1335) was added.

But Montauban also became, starting in the 1200’s, the site of many battles and over the centuries was taken over, invaded, demolished and rebuilt many, many times. It all started with the war against the Cathar at the beginning of the 1200’s, when most of the citizens of Montauban went over to the “new” religion, and the King of France’s troops invaded the city to take it over. It was largely demolished and then rebuilt.

No luck! In the 1300’s, the French and English, in the midst of their 100 Years’ War, fought over Montauban because of its strategic place along the Tarn River and the English even invaded the city for a while.  In 1348 an outbreak of the Plague wiped out much of the population.

But the most famous or infamous episode in the history of Montauban was in the 1500’s and 1600’s during the War of Religions between the Catholics and the Protestants. Like at the time of the Cathar, the city largely converted to the new reformed religion. Like La Rochelle on the Atlantic coast, it became a center of Huguenot life and studies and was one the three most important Protestant cities in France: La Rochelle, Montauban and Cognac.

By 1560 the city was completely dominated by the Protestants and Catholics were either asked to leave, or told they could no longer celebrate mass in their churches. The bishop was chased out of the city too. Because of this the king, Charles the 9th, had Montauban attacked three times in 1562. The ramparts were destroyed, Catholics were let back in and a treaty was signed. For a while there was peace. And then came Henry the 4th and the Edict of Nantes.

When the “good king Henry” signed the Edict of Nantes in 1596 it insisted on religious freedom and tolerance. And Montauban became once again, the center of Protestantism and had a Protestant university. Ramparts were rebuilt and it became a hugely important city once more – a “secure city” for Protestants. This didn’t last very long, because in 1610 Henry the 4th was assassinated and his son, Louis the 13th, brought up as a very religious Catholic by his mother, Marie de Medici, decided to do away with the Protestant strongholds altogether.

The 400 Blows of Montauban

In 1629 the king, Louis 13th, with his chief military man, the Connetable Duc de Luynes, laid siege to Montauban. The siege lasted 96 days, during which every man woman and child participated in the effort to defend the city. Eventually, surrounded and exhausted, with many people deserting the city or dying, the leaders of the defense of Montauban surrended and signed a treaty. On
August 20, 1629 Louis 13th and his army entered the city of Montauban, actually welcomed by a population tired of war.

In order to make sure that the city would no longer rebel, Richelieu, the Prime Minister and man behind the throne offered huge financial advantages to Montauban and it became very prosperous again. Most of the Protestants left: either emigrating or going into hiding in the Massif Central. After that a new cathedral was built, the National Square was rebuilt in a Classical style, and Montauban became an important loyal center for the king.

Right through to the Revolution, Montauban stayed loyal to the King. After the Revolution it was less important but under Napoleon, who created the Departments that we still have today, he created the Tarn and Garonne and made Montauban head of that district because the people of Montauban had been loyal to him. The Protestant university of theology was reopened there but eventually was transferred to Montpellier in 1919.

And finally, once again, during WWII Montauban was the site of terrible fighting. There was a large Resistance in and around Montauban thanks in part to the archbishop who, along with the archbishop of Toulouse, was one of the few to speak out against the Occupation and the deportations. The more the Resistants attacked convoys, the more reprisals there were, and in August of 1944 as the German army was fleeing north, they attacked the city. But just like in the 1600’s during the War of Religions, the townspeople took to the streets, and the ramparts and the church towers, and managed to chase out the Germans, and they were able to push back the Germans and were finally liberated.

After WWII Montauban became economically depressed; aside from the fruit growing areas around it, it lost its use as a commercial hub in favor of Toulouse. Only in the last 25 years or so has it developed a thriving hi-tech population and young families are moving back to the area. The city center, still intact with its beautiful red-orange bricks, and its medieval streets, is slowly being repaired and made “tourist attractive”. The view over the river is still beautiful and there are some lovely 17th century buildings and houses that are well preserved. Walking around the city center you can feel the centuries of history and admire the old constructions and the big National Square.

The Boulet: A hazelnut covered with dark chocolate and sugar that is a reference to the canon balls that were used against the Protestants during the fighting there.

The Montalbane: cake with a brioche dough and fruits confits.

The Fritons: made from duck or goose, the remainders after making foie gras are cooked and made into slices like rillettes and served with an aperitif.

More episodes about places we love in Occitanie