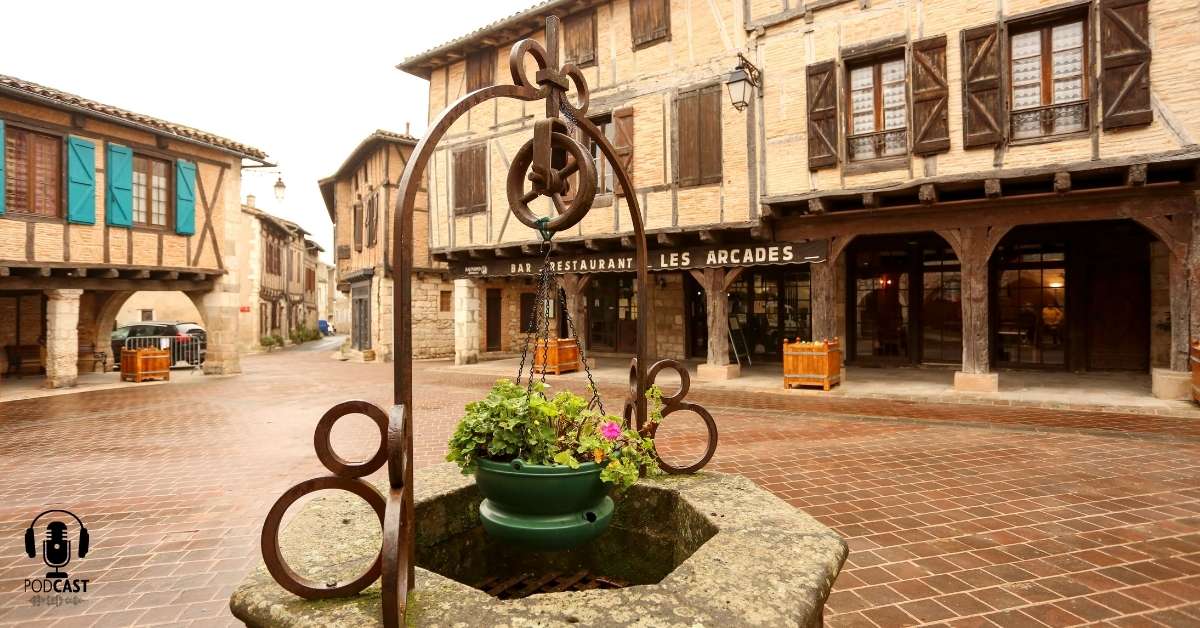 On today's episode of the podcast Annie Sargent and Elyse Rivin talk about bastides in the southwest of France. What do tour guides mean when they tell you that a place is a Bastide? Why is that important? There are a lot of bastides in the southwest of France. For this episode we use the example of Castelnau de Montmiral a charming village in the Tarn. But bastides were a small revolution at the heart of the Middle Ages.

A Brief History of Bastides in the Southwest of France

A "bastide" is a type of new town planned for economic development and was totally new starting around the year 1000. In those days most of the population lived in precarious dwellings in the forest. Urban centers were rare and didn't attract most people. Because of invasions and territorial disputes it was safer to hide in the woods.

When things calmed down around the year 1000 there was a lot of growth in population. There was a peaceful period of time and people started to gather in greater numbers around feudal castles. Most villages at that time developed either around a castle or around a church and abbey.

Bastides: An Urban Revolution in the Middle Ages

There was a new wave of urban planning separate from castles and monasteries based on the idea of attracting people to new towns an create economic opportunity.

The first bastide is the city of Montauban where the village started in 1144 and grew into a city. Most bastides didn't grow that much. But if you go to Montauban you'll see the center square and the original town built on a grid system.

It took some time but eventually the Count of Toulouse took the idea of this original bastide and developed it. The area was coming out of a difficult war and people were terrified. He decided to attract as many of them as possible to newly created urban centers. Many of them were peasants, but some were also trades people who had real skills.

Security in Exchange for Loyalty

The Count of Toulouse was offering security in exchange for the loyalty of the people who had been living "off the grid" in the woods. He gave them a safe place to live, land to cultivate, a place to work and trade, but wanted their loyalty in return just in case more fighting broke out.

Just to make it even more attractive, he also gave them favorable terms for taxes and the right to decide on their own charter. This means that every bastide operated with slightly different rules, but all were great places to develop the local economy.

Cordes-sur-Ciel that we've already done an episode about and Castelnau de Montmiral were both built in the year 1222. Both are a great example of this new way of living and new urbanization that went on for 150 years and then stopped. In that time 400 bastides were created all over the southwest. Right now there are about 200 that are left that you can still visit.

One of the guarantees of living a bastide is that they all had rampart walls and gates that closed at night to give everybody inside more peace of mind. This allowed for a more dynamic economy and population growth. In a way this was a small attempt at capitalism with less emphasis on the church than in other communities.

Each Bastide in the Southwest of France Had its Own Charter

Each family had a trade with a workshop and/or a plot of land. The inhabitants of the bastide had the freedom to define their own charter, generally under the leadership of the major sponsor. Letting the people define the terms by which they would be ruled was revolutionary to say the least! Up until then the local Lord made the rules, nothing was written down, the Lord could be capricious, sometimes abusive and people had no recourse.

In a bastide the people were ruled by agreed-upon rules spelled out in the charter and the Lord could not change things on a whim. Bastides had their own police. Everybody who lived in the bastide was on equal footing. Everyone started out with the same size plot of land.

Widowed women could continue to live in the bastide and in some of them widows with children could even join a bastide. People had to apply to join a bastide based on their skill and they had two years to prove that they were up to the task.

Many of these bastides were allowed to hold annual fairs and the fairs  attracted a lot of business from the whole area as well. There were fees associated with participating in a fair, but at least in a bastide they knew what they were going to owe.

The End of Bastides

The reason why bastides stopped being developed is because cities started to grow instead and the French king became more powerful. By the time we get to the 1300s we're in the 100 Year War and the political landscape changed.

Another problem is that after a while there were too many bastides in the same area and not enough new people to attract to them. It's like having too many Best Buys in the same area, they are all competing for the same customers.

Many bastides have a covered market at the center. All have covered walkways around the central square where shop keepers could display their goods.

If you visit Castelnau-de-Montmiral don't miss the church with its beautiful blue ceiling. Also take a look at the pilori. The pilori was used to chain up and shame people who had transgressed the rules. Punishment was public up until the French revolution.

There is a music festival called Les Musicales de Montmiral for a few days in July.

Hikes and Rides from Castelnau-de-Montmiral

The view from Castelnau is really nice, there is an app that you can download and learn about the village in French or English. It is listed as one of the most beautiful villages of France. This is called Castelnau but there is no castle there. You can find hikes and bike rides as well as horse trails on Wikiloc or Visorando. Puycelsi and Bruniquel are nearby. Cordes isn't too far either. The area is spotted with beautiful medival villages.

There are some wonderful local foods you could try in this area: