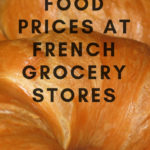 Photos of the Food Products Mentioned on this Episode

People who visit France love our yogurts. And it is true that by comparison to the sort of yogurt they sell in America, ours is a joy to eat!

What’s more, almost every visitor can try yogurt in France, even the ones that stay in a hotel and don’t have a refrigerator. Some yogurts are sold in packs, but many grocery stores in Paris also sell single yogurts. 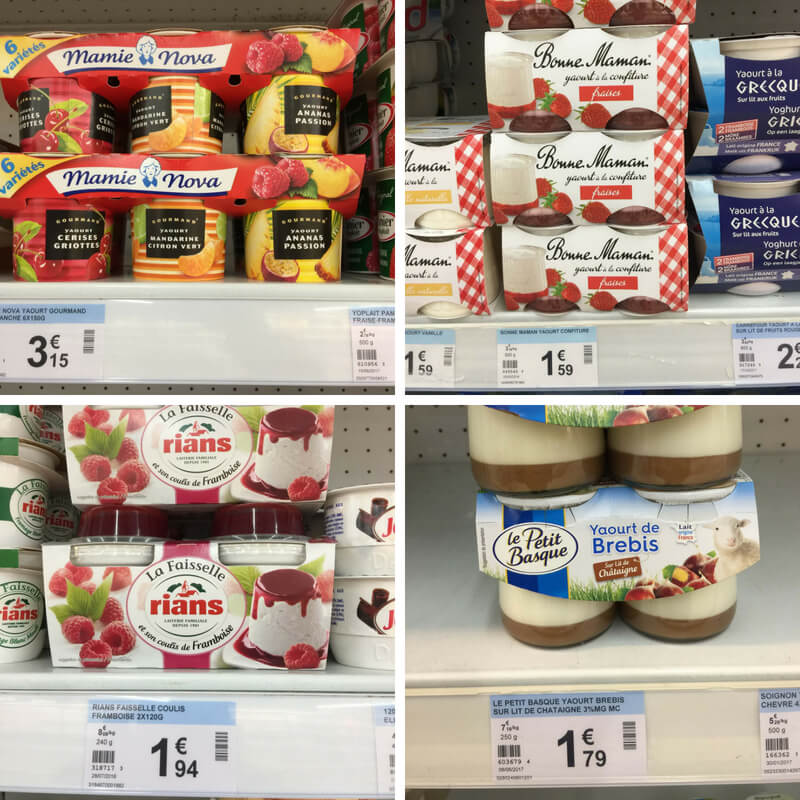 These are the more “dessert” yogurts. They are almost like pastries or custard, high in calories and absolutely delicious! 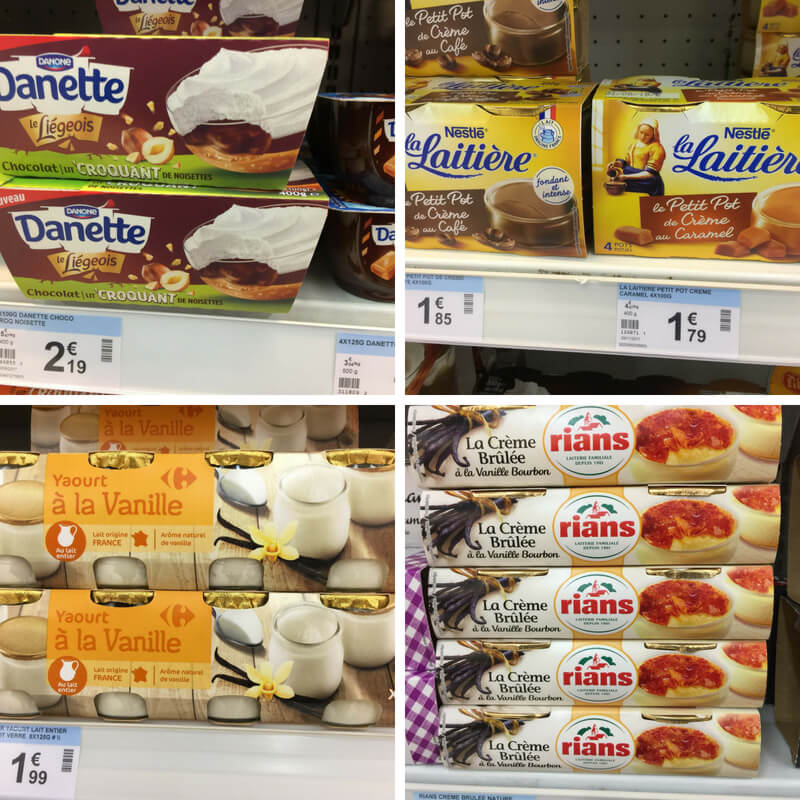 Yes, we have Starbucks in France now, even at the grocery store! Please note that milk in France is almost always long-life. It doesn’t need to be refrigerated until after opening. Also note that most French people have a Nespresso type machine at home. That’s why you’ll always find a wide selection of pods at the store. Drip coffee has become unusual. And, despite the name, nobody I know uses a French press coffee maker in France!

I should stay out of that isle, but I don’t. We only have one life, right?

There are a lot of champagne houses in France. Some you’ve never heard of because they are either too small or not rich enough to spread the word about them. That doesn’t mean that they are not really nice, try them when you’re in France!

Cheeses You Can Get at a French Grocery Store

France has hundreds of varieties of cheese and not every store carries all of them for obvious reasons! Many French cheeses are made with “lait cru” which means the milk has been filtered but not pasteurized. These unpasteurized products are not any more likely to cause food poisoning than any other food. It’s easy to avoid unpasteurized cheeses, they always say “au lait cru” in fairly big letters.

Items You Could Take Home as Gifts

My American relatives always enjoy French condiments as gifts. Just make sure to put those in your checked luggage!

Keep your kids happy while walking around Paris, give them French cookies! The grocery store has a big selection. 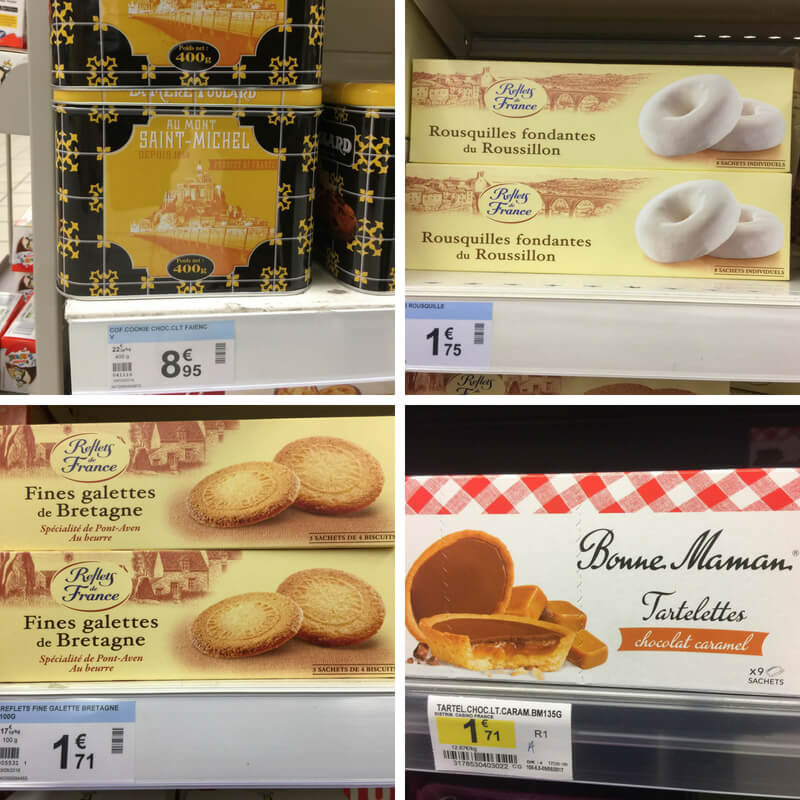 OK, not the gnocchi, that goes in a pan with butter. But all the other ones are classic French dishes that you can warm up in the microwave. Will they be super tasty? No. But they may be your chance to try some scary French foods!

France has great frozen vegetables. I don’t know why they are so much better than in America (probably butter), but they definitely are! 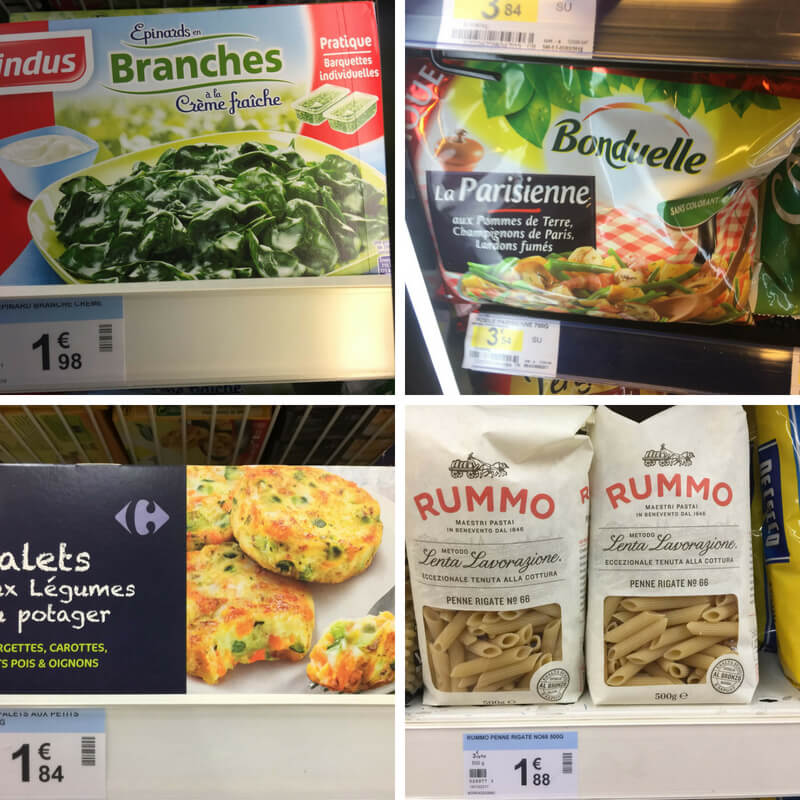 Jams at a French Grocery Store

We have lovely jams in France. Here are a few of my favorites! 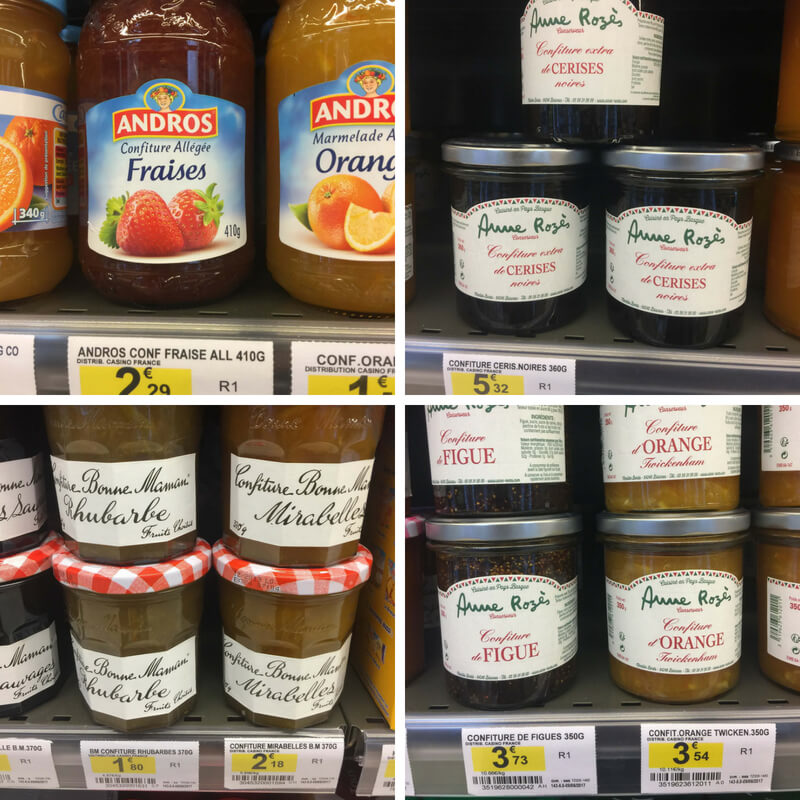 Dry-cured sausage and pâté are something that I missed when I moved to America. I don’t eat those so much any more (they are super unhealthy), but you may want to give them a try, they are tasty! 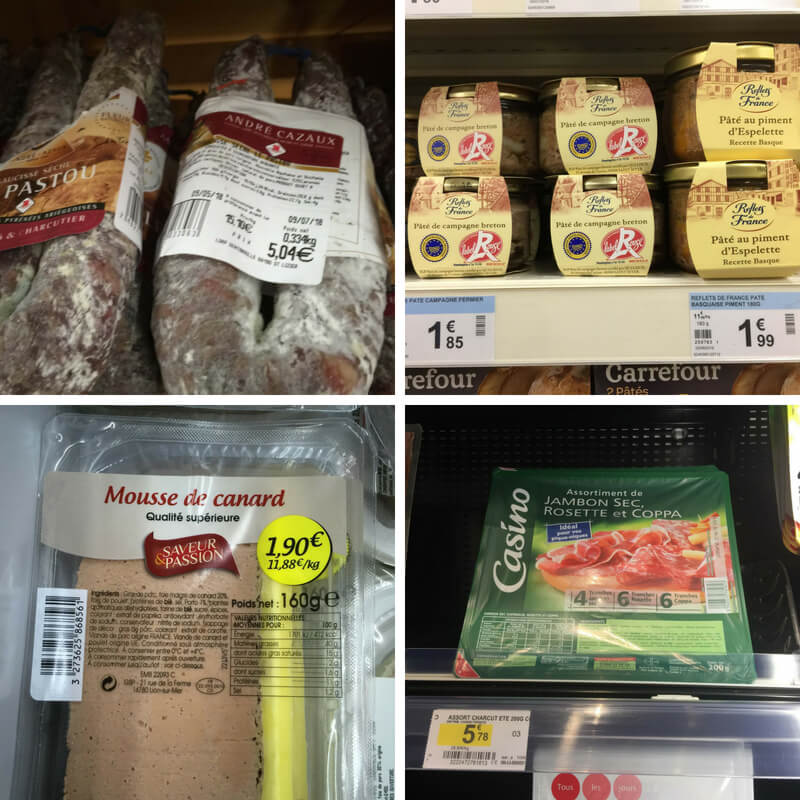 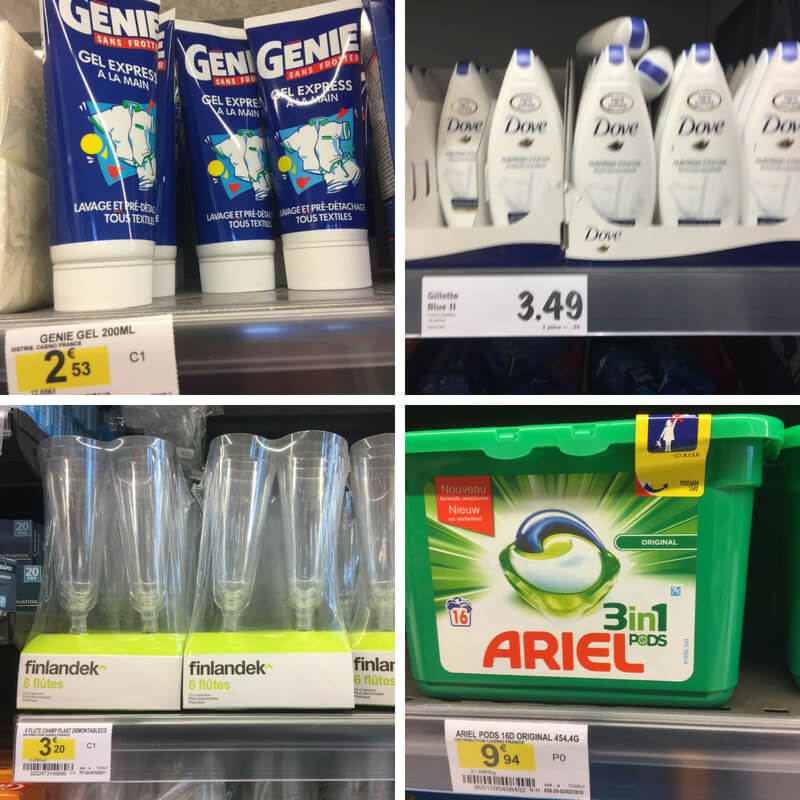 We have amazing fruits and vegetables in season in France. Make your mother happy, try some! 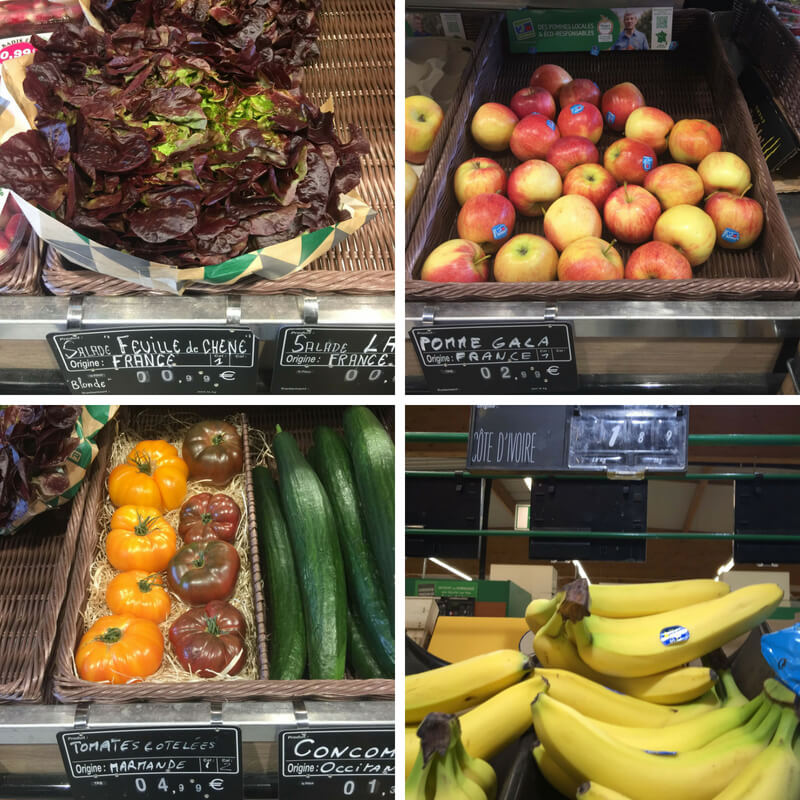 These are definitely weird French foods. Piperade will please almost everyone (it’s a tomato based sauce) but tripes are nasty to most people! Cassoulet is a favorite of mine and a time when I definitely enjoy some meat. Foie gras? I like it, but in small quantities. Give them a try when you’re in France and let me know how you liked them! 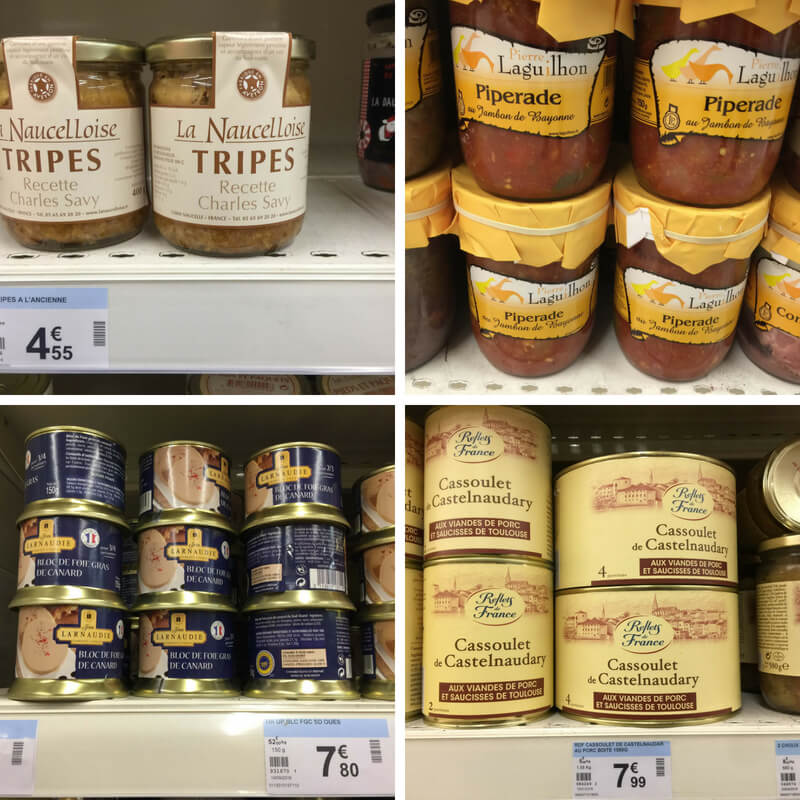 There are lots of brands of bottled water in France. Be aware that in France all water fountains dispense water that is safe to drink unless it says “eau non potable”. 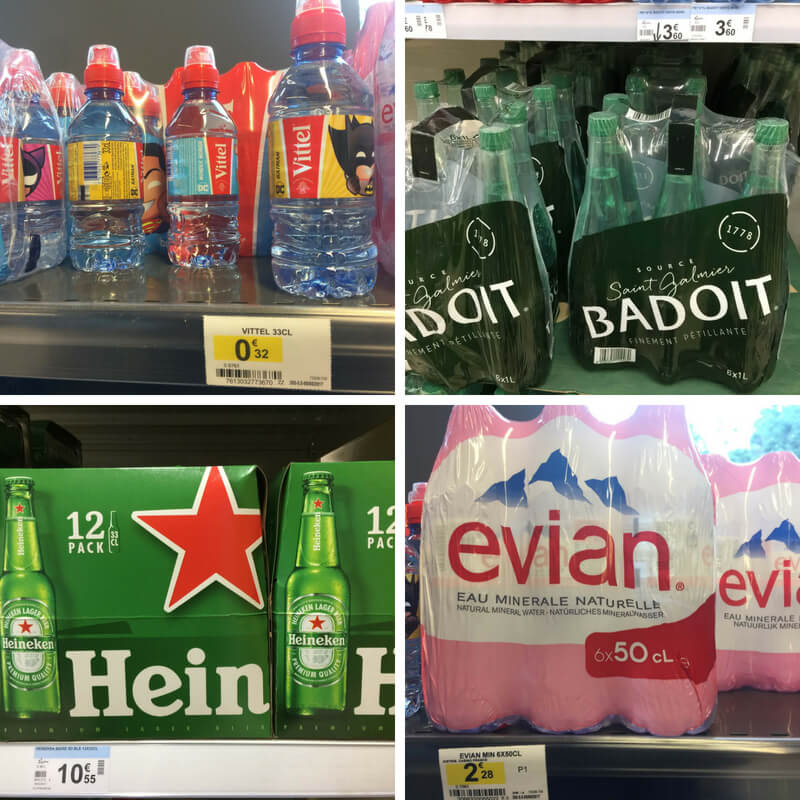 Lots of wine in France. Lots and lots. To learn more I suggest you listen to these episodes: 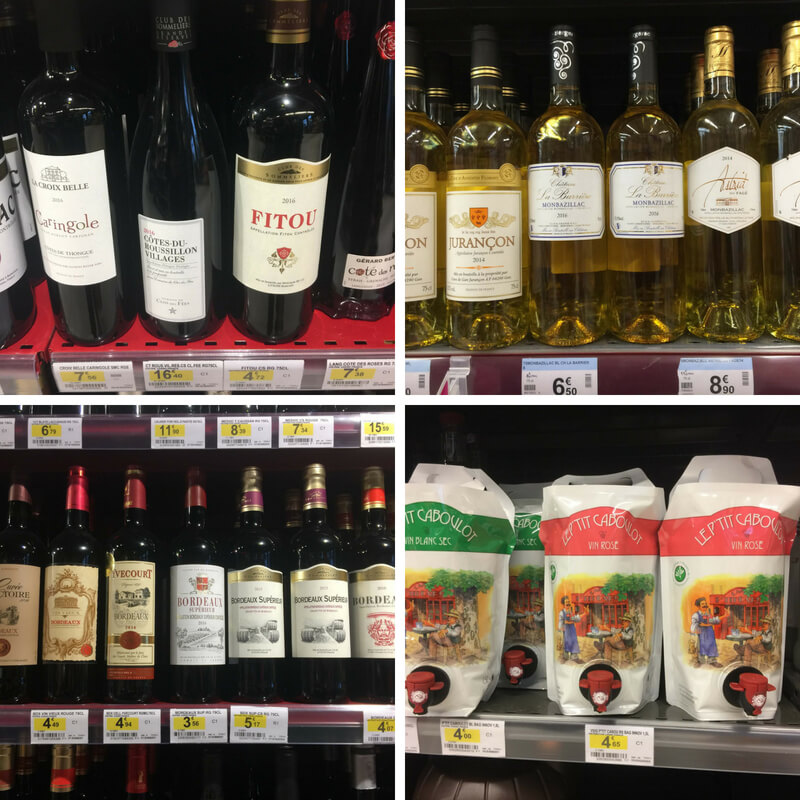