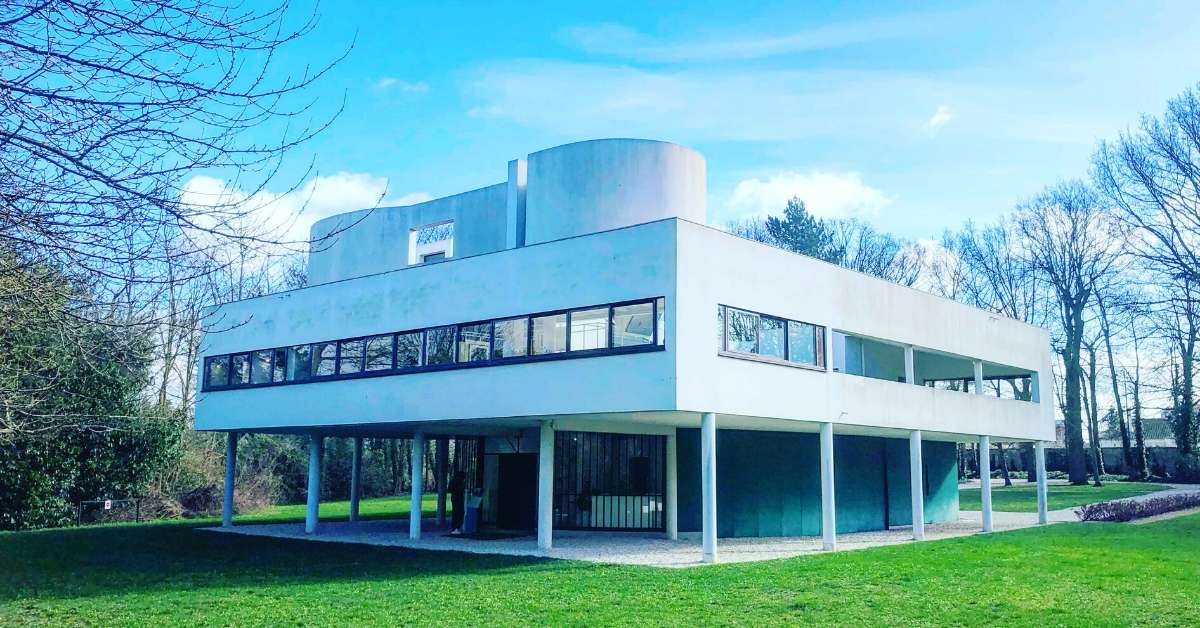 Categories: Arts & Architecture, Off the Beaten Track in France, Paris

David is a designer and as such has a keen interest in all things architectural.  He took a lot of wonderful photos of these sites. You can see them by following Annie and David on Instagram.

We discuss how Le Corbusier was a man of startling beliefs, and not just about architecture. Many in France don't think he deserves the money that is spent on keeping his memory alive.

Then we also veer off into discussing David's favorite neighborhood in Paris, favorite restaurants, driving in Paris, and Annie's VoiceMap tour of Saint Germain des Prés.

Please note that these sites are only open on certain days, plan accordingly. Also, due to the pandemic, some of these times might have changed. Check the official website of each development.

Le Corbusier started out in Switzerland training as a watch maker and then studied under Auguste Perret who was a pioneer of reinforced concrete. He never went for the standard architectural degree. But by combining watch-making and reinforced concrete, plus his own creative genius, he was able to revolutionize architecture forever. He has been imitated so much that by now some of his creations look like standard 70s style.

Le Corbusier in the 16th Arrondissement

There are 3 sites to see here:

These are very clear early examples of Le Corbusier's 5 points of architecture. Walls are no longer structural, the weight of the structure is held by pilotis. These are a row of columns that hold up structural slabs. It allowed him to lift the building off the ground as you can see at Maison Roche.

This also makes it possible to put the walls wherever he wanted for spacial purposes rather than structural purposes. The facade can also be a composition within itself without reflecting what's going on inside. And some of the spaces are really large and tall, let a lot of light and air in. This is the opposite of a regular house with separate small rooms.

There are also 5 or 6 Art Nouveau houses by Hector Guimard on rue Jean de la Fontaine in this neighborhood, also great to check out.

This was Le Corbusier's private residence and it is just outside of Paris in Boulogne-Billancourt. Please note that you'll need to climb up 7 flights of stairs to see this. It's worth it if you're an architectural pilgrimage, but probably not for everybody.

Maison Cook is in the same area, about a 12 minute walk from Molitor. It is not open to the public, but it's interesting from the outside. It's in a string of modern buildings that let you appreciate the difference between Le Corbusier and other architects.

This one is a must-see for people who are interested in Le Corbusier. It is to the west of Paris in a suburb called Poissy. From down-town Paris you can take a train to Poissy then take a bus to the villa. They chose to rent a car not realizing that the smaller car rental places in Paris close at lunch-time.

There isn't much to see in Poissy besides Villa Savoye. You can park on the street if you go by car. If you only have time for one Le Corbusier visit, this should be it because it illustrates the 5 points really well and it's a gorgeous site.

You're supposed to come to the building sideways. There's a ramp that goes from the ground floor all the way to the roof garden.

Le Corbusier as a Person

Le Corbusier is a controversial figure who at times expressed extreme right-wing views and aligned himself with fascists. During WWII, in order to get his buildings off the ground, he coddled up with the Vichy government and  moved to Vichy for several months. He exchanged correspondence with Mussolini, wrote about Hitler as a light in the darkness. There is little doubt about his political views.

Despite all of that, when interviewed, he didn't sound like a crazy person and he was charming. He also tried to respond to a real hunger for modernity. Le Corbusier fell in the grand tradition of Haussmann in the sense that he didn't see anything wrong with tearing down whole sections of Paris to build something new.

He owned a magazine called L'Esprit Nouveau  where he published articles that were often controversial about architecture. He loved automobiles and airplanes and all sorts of machines. To him houses should be machines for living.

He liked to push technology beyond what it was ready to do and beyond what people were ready to accept. He used huge walls of glass which makes it hard to have furniture.

He also believe that every building should have a flat roof and terrace so you could go up there and enjoy the sun, the night sky, fresh air. The problem with this is that he didn't include down spouts and that it rains a lot in Paris, so there are constant water infiltration problems.

Most of Le Corbusier buildings age really poorly and would have self-destroyed were it not for the French state maintaining them as historical monuments. There are a lot of people in France complaining that the State has no business spending lavishly on keeping alive the memory of a man who was an anti-Semite, a supporter of the Vichy regime and also hated Muslims.

Madame Savoye wrote to Le Corbusier several times about leaks in the house and he never responded to her complaints. You can read more about it here: The Darker Side of Villa Savoye

Le Corbusier Inspired a lot of Other Architects

On the face of it, a lot of what Le Corbusier did looks like 70s style. But we have to keep in mind that he worked in the 20s and 30s. Thousands of architects imitated his style that's why it looks so unremarkable to us today.

The second grouping of buildings is more commercial. There are two dormitories and a homeless shelter. If you have to choose, David recommends Pavillon Suisse and Maison du Brézil because they are both in a university park, they were built 30 years from each other and they are across the street from one-another.

This lets you see how his style went from very machined to more of a personal touch. Maison du Brézil is from the 1950s and that's where you see the stained glass.

Even though we didn't mention it in the episode, there is a section at the Cité de l'Architecture in Paris dedicated to Le Corbusier. You can walk through a full scale model of one of his apartments.

If you go to the Cité de l'Architecture, do not miss a stop at the café because it has a great view of the Eiffel Tower!

Categories: Arts & Architecture, Off the Beaten Track in France, Paris