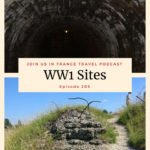 Jennifer and her family visited WWI battlefields in late June / early July 2018. They visited areas that are in the Alsace region and the North of France. The whole family enjoys history and decided to visit France because this year is the Centennial celebration of the end of WWI.

Most of the celebrations will take place closer to November 11, but the museums had been refreshed and are ready for a new crop of visitors

How Jennifer Used the Podcast to Prepare for Her Trip

They found us through the Driving in France episode because they were looking to rent a car in France. Then Jennifer started to listen to other episodes and gleaned helpful information about France in general.

What WWI Sites Did They Choose to Visit?

Is Taking Toll Roads Worth It in France?

On this trip they went between two areas of France that are about 4 hours drive apart from one another. Jennifer was surprised how good the toll roads were, how well the traffic moved, etc.

Toll roads are even more worth it now that the speed limit on “routes nationales” without a divider is set to 80 km/hour which feels really slow.

They had done some research ahead of time. Being Americans they didn’t learn about it in school much. But they decided to visit Fort Vaux and Fort Douamont.

After the war of 1870-1871 against the Prussians, the French decided to build many forts around Verdun to defend the city. By the time WWI happened, most of these forts had been left empty and the Germans took them very easily. Some of these forts look like dugouts.

The Staggering Number of Deaths during WWI

Some of these battles killed 100,000 people, it is absolutely inconceivable for us today. Any French village will have a memorial to WWI, even the smallest villages sometimes lost hundreds of young men.

Annie’s grandfathers served in Verdun even though they were French colonists in Africa. As more and more French mainland youth died, they started to call up young men from all the French colonies.

Civilian dead: on the Allied side 4 million, Central Power side: 3.7 million.

For as strange as it sounds, Europeans wanted war because they wanted to settle old scores with neighbors. There is nothing particularly significant about Verdun and yet it had been fought over for centuries.

There were battles all over Europe and some far away from Europe (Africa and Asia notably), motivated by this fight.

They didn’t spend much time in the city of Verdun, although it is quaint. It is not a battlefield in the strict sense of the word but rather a ring of forts. You really need a car to see it.

There are also signs tacked to trees that indicate that it’s not safe to walk in an area because of unexplored ordinance. This seems crazy 100 years later, but it can still happen because this is mostly a rural area.

As you visit the area you will also find signs for “villages détruits” where the land had been left as they were at the end of WWI. The areas are maintained so you can visit and it shows where people’s houses used to be.

France Lost 10% of Its Male Population in WWI

Imagine going home after the war to a place where so many young men have died. People were forced to leave their villages and they came home to nothing.

These are still technically villages, have a mayor responsible for the area, and the speed limit drops to 50 km /hour just like in any other French village or city.

How Long Do You Need in Verdun?

It would be hard to do in just one day. What they did is they saw the Verdun Memorial or Verdun Museum in Verdun plus drove around one day (4 hours). The next day they saw Fort Vaux and Fort Douaumont (also 4 hours).

You can’t miss it, it’s the only one there. This museum did a wonderful job speaking to the soldier’s experience. For example there is a whole exhibit about the importance of mail. Excellent Museum and a great place to start your visit. Even the teenagers enjoyed it.

They enjoyed Vaux best between Vaux and Douaumont. The Vaux entrance fee includes an audio guide and it was really interesting.

The Ossuary Is Sobering

Verdun happened fairly late in the war and seeing the ossuary and cemetery was a powerful experience.

Things That Changed with WWI

Men used to go home to harvest their fields before WWI, that stopped. Machine guns were invented. Airplanes used in war was new. Tanks were unheard of before WWI.

The boys enjoyed the Verdun area more because it seemed like what they expected of war more. But Arras is fun too. Arras has a cobblestone big town square that’s very unique. It looks like Amsterdam and not like the rest of France.

If you’ve heard anything about WWI you’ve probably heard of Verdun and the Battle of the Somme. These were the two biggest battles that had the most amazing number of casualties and feats of heroism.

Arras feels like a small town, but there are suburbs that make it a pretty good size city. It is a pretty town too.

In Arras they ran into people who didn’t speak much English. People are very patient and generous, but outside of Paris don’t expect everyone to speak English.

Vimy Ridge is 10 minutes outside of Arras and this is the area where many Canadians fought. The land was donated to Canada. Today Canadian college students take visitors on tours and this was extremely enjoyable.

You can go on the “Circuit du Souvenir” or Rememberance Trail. It goes through Peronne, Albert and Beaumont-Hamel. There is a massive crater that’s being restored by a group of British Retirees. It is called the Newfoundland Crater. The craters are a testimony of the amount of destruction that these people had to go through.

This immense memorial towers over the trees and it lists 70,000 names of missing British soldiers. You see rows upon rows of not just dead but also missing people. It is so sobering, even for teenagers.

There are tunnels everywhere under Arras. There are unexpected neat things everywhere. It is worth going into those tunnels, they went to 3 sets of them and it was interesting.

These tunnels were used in both WWI and WWII. They had the idea to combine medieval tunnels to get them to the German front line. They made soldiers enter the tunnels and wait and suddenly break out of the earth to surprise the Germans.

Waging war like that is completely different from anything they do in war today.

What Did Your Teenage Sons Get Out of this Visit of WWI Memorial Sites in France?

They both enjoy history. Her 16 year old had just taken 2 years of World History and was better informed. Her younger son hadn’t studied it at all. But they both enjoyed the visits.

At Vimy Ridge everyone was tunneling, sometimes belligerents would meet under the ground and fight in the dark pickax to pickax.

This brought home that war can be exciting with the tunneling and the forts., and it sounds exciting. But when you see these memorials you see that war is permanent and that for so many people it is also final.

What Do You Wish You Knew Before You Went?

The episode about grocery stores was really helpful. Definitely make use of grocery stores to get bottles of water or sodas. It’ll be a lot cheaper than buying from street vendors. Cold beverages are not super cold in France, they are cool, not cold.

Using American credit cards was not a problem except for gas stations. Their card issuer refused to give them a card with a pin number for some reason. At gas stations they used their ATM card because it as a pin.

If you’re not sure if your credit card is going to work at a toll-booth, make sure you have some cash with you. Some toll booths will let you pay with cash, in that case the logo above the lane displays coins. Otherwise go under the green arrow. There’s always a call button at toll-booths, a human can talk to you.

Restaurant Hours Outside of Paris

People have lunch from noon to 2, but they won’t serve food between 3 PM and 7 PM. Even if a restaurant is open, they don’t have a cook on the premises, they can’t serve you food. They only stay open to serve drinks.

“I’m not hungry right now, I’ll eat when I’m hungry” doesn’t work in France because French people eat only at set times. Even smaller cities like Reims and Arras don’t have restaurants that serve non-stop. The restaurant may be open, but since the cook isn’t there, they will not make you food!

Hotels That Don’t Give You a Top Sheet

Many hotels in France give you a nice big duvet but not top sheet. This is a problem when it’s hot and you want something to cover you, but not a big duvet. Maybe bring a top sheet if you come to France in the summer.

If you like a wash-cloth or hand-towels, bring them because they are not standard at French hotels, especially the lower price ones.

Beware of Automatic Translators, Use Image Search Instead

This is especially true in restaurants because automatic translators work word for word. For “ficelle Picarde” and the machine said “Picard string”. It turned out to be nice, but we don’t eat strings.

At restaurants, instead of using Google Translate, use the image search. That way even if it’s an odd local name you can see what it is from the photos.

If it’s a local specialty every restaurant in the area will serve it and it usually mean that it’s pretty good.

They traveled without a data plan, but the navigation system sometimes sends you to the closest place named that instead of what you actually want.