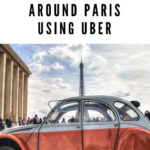 What You Will Learn in this Episode with Timestamps

2’52 The biggest difference between using Uber in the US and in France is the language barrier.

3’25 Uber Pool vs. Uber Black: If you use the Uber Pool option, because it’s a big city, you will have a lot of people riding with you and it will add on to the time it takes to get where you want to go. Uber Pool is sometimes half the price of Uber Black, so it’s worth it if you’re not in a hurry.

4’05 No Uber Pop in France: Uber Pop is the Uber service with older cars.

4’30 To get an accurate bid you need to set your pin location properly. Sometimes you have to enter the address manually.

6’00 It’s hard to get a good estimate of how long before the driver will pick you up with Uber in Paris because of the traffic conditions.

7’10 Tips on what to do on May 1st in France. Blair suggests taking an organized tour on that day and going away from Paris with a group where everything is organized.

8’33 When using Uber in Paris you will get to use your French, and it’s good to also have the Google Translate App.

9’15 Uber Pool is a better option in the US than in Paris, that could be that it’s because there are fewer Uber drivers in Paris.

9’40 Uber in Paris is cheaper in August than during the rest of the year. That’s probably because it’s mostly tourists calling Uber in August, demand goes down, so prices go down as well.

10’25 Uber is worth it if you have more than two people in your party. To go from one of the Paris airports to either the city center or to Disneyland Paris, it’s definitely worth it. A taxi between CDG Airport and the left bank will run you over 60€, the same ride on Uber is at least 15€ cheaper.

13′ Install the Uber App before you come to France, you will use the same App with the same credit card.

13’40 French cars also have a license plate on both the front and back of the car, so it’s easier to recognize the car if you don’t know European cars.

15′ Basic French phrases you will need when using Uber in Paris:

16’30 Some things Blair and her husband enjoyed in Paris: Paris Picnic. Blue Bike Tour was great too.

19′ What else did you wish you knew before you went? Uber in August is cheaper, if you go the rest of the year consider mixing things up and maybe using the bus system (see our episode on comparing the Paris Metro with the Paris Bus and details on how to use them both).

19’50 To go back and forth to the airport definitely use Uber. Here is information from the Uber website on where to wait for your Uber at CDG: from terminals 1, 2A, 2C, 2D and 2F, exit on the departure level. From terminals 2E, 2G and 3, exit on the arrivals level. Head outside and wait at the curb. Then enter your terminal and door number so your driver knows where to find you.