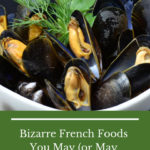 [02:51] Warning: this episode discusses animal parts, it may disgust some of our listeners.

[03:33] French people think that if you’re going to eat meat anyway, you might as well eat the whole animal.

[04:48] Historically, during a time of siege, people ate all the animals they could find, even ones we do not normally eat. Example: Paris siege of 1870 and Warsaw during WWII.

[06:30] How unusual parts of animals have become delicacies in France.

[07:16] The reason why we felt it was important to discuss these things is because you will find these foods on the menu in many French restaurants, usually as one of the specials for that day.

[07:48] How specials work in French restaurants and restaurants that specialize in regional French dishes.

[08:43] What you can do if you want to try these bizarre French foods while you’re visiting France. Go to restaurants that specialize in regional foods, or go to Les Grands Buffets in Narbonne.

[11:12] You could also go to any “charcuterie” or “boucherie-charcuterie” or “traiteur”. They will have some of them, but you won’t find all of the ones on our list at any one place in France, that’s not how it works.

[12:08] If you want to look up specific recipes for any of these dishes, try the French recipe site called Marmiton.

What You Will Find on the Seafood Platter in France

[15:02] Elyse orders « bulots » without knowing what they were exactly.

[15:37] This French food is controversial and there are good arguments made of why we should not eat it. But in the Southwest of France, we eat some of it, mostly in small quantities because it is very rich. It’s a food for special occasions.

[17:49] The tradition of making your own “foie gras” in families from the Southwest of France.

[19:31] Steak Tartare is raw ground beef. It’s like sushi, but with beef. One variation on the Steak Tartare is qualified as “aller-retour”. [Addendum: Annie went a little too fast here. They do serve cooked hamburger with a cooked egg on top, that’s called “à cheval”, but they also put raw egg in Steak Tartare, it’s part of the recipe.]

[21:19] We explain the difference between “steak de cheval” and “steak à cheval”. The first is horse meat, the second means there will be a fried egg on top of your cooked hamburger.

[22:08] Sometimes you’ll see the word “au couteau” which means the meat hasn’t been ground in a machine, but rather chopped with a knife, by hand.

[23:15] These are muscles served in a pot. If they are “marinière” it means they are served with a white wine, onions, garlic and parsley sauce. Or you could get the Normandy kind, which is with cream instead of wine.

[24:44] Giblets are part of the stomach of ducks or chickens (probably other birds too!) and they are slow cooked in fat until really tender. [Addendum: Giblets have nothing to do with hearts, Elyse was wrong about that, but she’ll never admit to it 😉]

[27:07] Rooster cooked in wine. A classic of French cuisine. We have a lot of classic dishes cooked in a lot of wine, especially from the Burgundy region.

[28:46] Large snails cooked in a butter, garlic and parsley sauce. Most Americans try them and some actually like them. It’s hard to know if it’s the butter they like or the escargot, but it’s a popular dish for visitors to try. The snails that are served in restaurants do not come from the side of the road, they are bred to be eaten.

[30:38] This is a meaty spread, usually eaten with bread, could be pork, duck, salmon, tuna. It’s always super fatty. It is served at “aperitif” at lot. We explain the difference between pâté and rillettes.

[32:24] Delicious beef and vegetables stew, often served with bone marrow. Another extremely fatty food (especially the bone marrow!), but well-loved. Annie shares her technique for making pot-au-feu and how to make it so you skim most of the fat off and it’s better for you.

[36:35] This is one that will put many people off, but it’s so good! It’s duck hearts, cut in half, and cooked with a parsley and garlic mixture. It’s a specialty of the Southwest.

[37:52] This is the French version of the Grilled Cheese and Ham sandwich. Often contains béchamel sauce, and the Madame version adds an egg on top.

[38:50] This is pork or duck rind cooked until it’s crispy. They serve it all the time in Lyon. It’s mostly an aperitif food and we’d rather have an olive!

[40:07] This is a popular dish in the South of France, both in the Catalan and Basque areas. In France, they serve pig’s feet whole, bone and all.

[43 :06] This is one neither of us will eat, it’s so pungent that you can smell it from across the table if someone near you ordered it. It’s the inside of the lining of the stomach of cattle mixed with pig’s feet and baked. Also, the one tip every English speaker can use to know how to say that name, it’s not that hard, say it the same way you say the word “quand”.

[45:41] One of the worst foods in our list of bizarre French foods is Andouille or Andouillettes. It turns out the fabrication process is pretty much the same, but one is served hot as a meal and the other sliced and cold for apéritif. 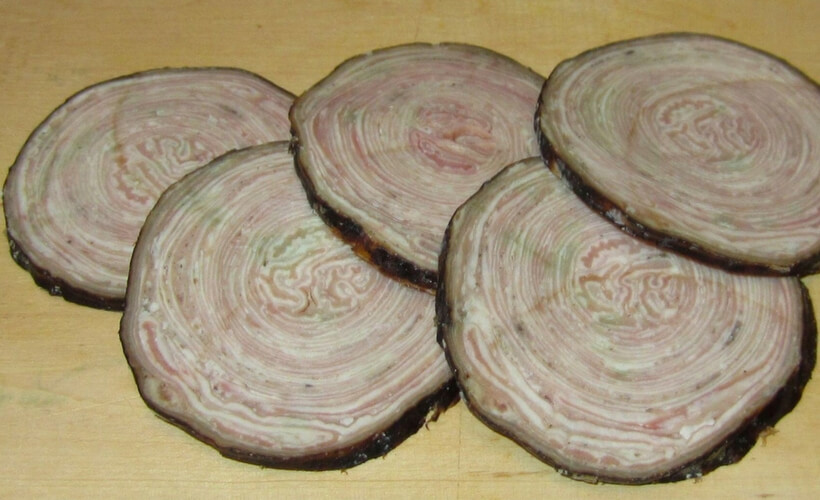 [54:06] This is sweetbreads, which is made from the thymus gland inside on the pancreas. It’s usually served with a sauce like mushroom sauce, or sweet and sour sauce. It’s not on the menu often, but it tastes good, especially if you don’t know what you’re eating!

[56:08] This one is admittedly disturbing, but it’s extremely popular in France. It is made with the blood of the pig plus onions and seasonings. Boudin blanc is made with bread, milk, and a little bit of chicken.

[57:55] Lapin means rabbit, French people eat it a fair amount. It is usually served with either a mustard sauce or a cream sauce.

[60 :03] This is another one that’s really disturbing. It’s calves brains, we find it untouchable, but it is a delicacy.

[61:24] Rognons are kidneys. It is usually served cut up into pieces on skewers. The taste can be strong, but not unpleasant. It’s meaty. The restaurant called Robert et Louise in the Marais in Paris specializes in it.

[63:09] These are not kidneys at all, they are testicles. They serve those in areas where they still do bull fighting, such as the Basque Country.

[64:00] This is horse meat that French people have always eaten and got popular again when mad cow disease was a problem in Europe. The meat is a little bit healthier for you (leaner) and cheaper also.

[66:09] This is based on the pig’s head, boiled and deboned and cooled into a loaf, then sliced and accommodated with pickles and a vinaigrette dressing.

[67:13] Fromage de tête does not contain any cheese at all, it’s all meat products, generally from the head of the pig. It can be made from wild bore in some regions as well, in that case it is called “fromage de hure” which Annie has never seen, so it’s not a common variant.

[67:51] Pintade is Guinea Fowl. This is like a small chicken but with a more subtle taste. Elyse loves it, Annie doesn’t remember having it. You can see it at the grocery store sometimes around the Holidays.

[69:06] Cerfeuil is a type of venison, technically it’s “chervil”. It’s a game meat, the flavor is pungent (and not pleasing to Annie!) and it was hard to choke it down.

[70:14] We have so many stinky cheeses in France that most people have a special box in their fridge to contain cheese odors. Most of these cheese smell a lot stronger than they smell, but still, it takes dedication to the cause to take them into your fridge!

[71:22] Époisses is a soft cheese from the northern part of the Burgundy area. Elyse tells us about her first encounter with “époisses”, one she’s never forgotten!

[74:05] Maroilles is another soft cheese from the north of France. It is also brined, and terribly pungent. Annie tells us about buying “maroilles” by accident and thinking one of the dogs at her house had an accident in the kitchen!

[76:16] This one is also a soft cheese from the Champagne area. It is often served after putting a little bit of champagne over it.

[76:46] Some camembert can be really mild, if served right out of the fridge. But if you get raw cheese camembert and you leave it out, it can get really smelly. A favorite in most French households.

[77:36] Also a cheese that can be mild when it’s not left out. But “real” brie (Brie de Meaux) is not smelly while it has a strong mouth flavor. You have to be careful how long you let those cheeses ripen in your fridge or they’ll get so strong that you can’t eat them!

[78:43] It a little harder cheese, not as smelly as the others, but can be startling if you’re not used to smelly cheese. The flavor is good, it’s an easy smelly cheese to try because it won’t completely gross you out.

[79:05] The ones from their region of origin, Alsace, are quite smelly and strong. Others are really mild. The name has not been protected well and it doesn’t mean much anymore.

[79:25] This is a cheese from the Auvergne region, it has a bit of a strong smell to it, but again, nothing that will make paint peel. The flavor is great, it’s a good “strong” cheese for visitors to try.

[79:49] This is again a cheese from the Auvergne area. The big brands we’ve gotten used to (Société, Papillon) make mild versions of the cheese. Small producers make more extreme versions of the same type of cheese.

[80:51] Aligot is from the Auvergne and Tartiflette is from the Alps, but both can be found all over France, especially at Christmas Markets. These are hardy winter dishes with potatoes and melted cheeses. They have a strong flavor, but are delicious and are well-loved, even by children and visitors.

[83:25] Tripou is a type of Tripes from the Auvergne, not served in a heavy cream, but still cow tripes. If you’re in the Auvergne and you have a choice between tasting Tripou or Aligot, don’t think twice: try the Aligot!

[84:30] In France we also have normal foods with strange names. This is done on purpose, mostly for marketing purposes. For instance, we have “Tête de Nègre” which is a chocolate covered marshmallow with an offensive name. We also have “Pêt de Nonne”, a beignet. We have a jam called “Gratte-cul”. A cheese from Burgundy called “Trou-du-cru”.

[86:10] Why Annie went back to not eating meat. It’s Burger King’s fault! And then Elyse couldn’t stand to have me suffering alone, and she joined in the fun 😉

[89:19] The all-new strange foods you can now find in France: insect pâté! We have come full circle, haven’t we?