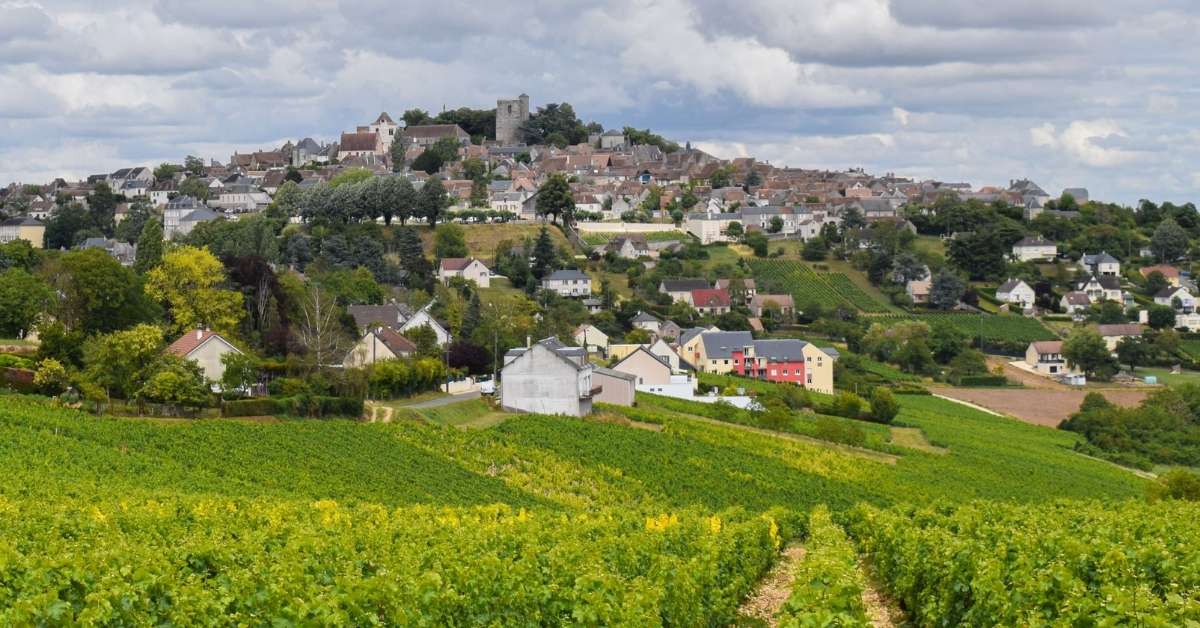 Returning to the same place over and over again is not something most visitors do, but my guest today, Carl Carlson, has been to Sancerre many times. He and his wife Christine are from Hawaii, but have been going back to Sancerre for at least a couple of weeks almost every year since 2004.

We've talked about Sancerre before on the podcast because that's where the language school Coeur de France is situated. It turns out that Carl knows Gérard and Marianne who own the school. They've been introduced to many other people in the village and it's almost a second home to them, even if they rent a different accommodation each time.

Sancerre is world famous because of the wine they produce there. It is one on my favorites! It's easy to get to by car, but also by train. The nearest train station are in Cosne-Cours-sur-Loire, Nevers or Bourges. Carl likes to rent a car at Porte-Maillot so he avoids driving inside of Paris. That's a good idea for most people actually.

Carl and his wife like the fact that few people in the village speak English, therefore forcing them to practice their French. It's not touristy per se. There are visitors that come for the wine business and for the language school, but it's not a destination that so many people flock to.

What Do You Do for 3 Weeks in Sancerre?

Carl's idea is not to have much of a schedule. He enjoys settling in to the rhythm of the village and not rush anywhere. They like to go to the local café to the Auberge Joseph Mellot for dinner the day they arrive. The next day they go to the village café for breakfast. There's a nice open-air market in Cosne on Sunday and Wednesday mornings. You'll find the list of all the establishments they like to visit in the Guest Notes.

There's also a dairy truck that comes by and they sell wonderful yogurt and butter. Café Librairie is a favorite too. It's about getting to know people and getting to know their schedule. You need to have the mindset that you will go with the flow. If you're too uptight, you won't get along.

The village is picturesque, there is a central square with boutiques, wine  establishments (aka "caves"), cafés, a one star restaurant. There are a lot of wine tasting and wine buying opportunities. The vintners in the area do well. Sancerre wines sell for a minimum of 12€ at French grocery stores. Most are around 20€ per bottle, which is expensive for France.

Why Not Every French Wine Is Sold in the US

It's difficult for small wine producers to get into the US market because there are a lot of mandatory steps, paperwork and taxes to pay along the way. They must go through specific brokers in France, then importers and licensed agents get involved on the US side. And then it goes to the many retailers. Many hands touch that bottle of wine and the price increases every time. It may only be worth it if a producer can ship wine by the container-full.

Carl enjoys the wines of Jean Reverdy et Fils in Verdigny. It's only a 15 minute drive from Sancerre. They've become friends. Those wines are now availble in Hawaii where the Sauvignon Blanc sells for around $20 a bottle. They also make a rosé with their Pinot Noir.

Chavignol is another wine producing village near Sancerre. André Bourgeois is a large producer there and they export a lot to Hawaii and the US in general. There's a nice little restaurant there called Au Ptit Gouter. This is also where they produce the cheese called Crotins de Chavignol.

Great Places to Visit Around Sancerre

Guédelon aka Château de Guédelon is an amazing experiment. They are constructing a medieval castle and village with the tools and methods they had in the Middle Ages. They do everything themselves, including cutting the stone, growing and cutting the timber, etc. The work is done by hand, the workers wear period costumes. It's been going on for over 25 years and it's really interesting to visit. It's like a science experiment with archeology.

La Charité-sur-Loire is a book seller's village. There are also a lot of chateaux in the area. Sancerre is far east on the Loire so the big famous chateaux of the Loire Valley are about 2 hours away. But there are smaller ones that are worth a visit. Nevers is a nice city, and so is Bourges. Bourges has a magnificent Cathedral and some good shopping too!

When you're in the area you should go visit a goat dairy. Search for "visite élevage de chèvres" and the name of the town where you're staying to find them. Or ask at the tourist office, they can tell you where the great visits are.

Le Trial de Sancerre is challenging, there is also one in Bourges as in many other parts of France. The one is Sancerre is beautiful because you run  through the vineyards.

Carl also talks about his experience walking the Camino de Santiago in Spain and the Portuguese Way. They also did a section around Le Puy-en-Velay, Aire-sur-l'Adour to Saint-Jean-Pied-de-Port via Bayonne. In the French part they were mostly around French walkers and they had a great time with it. They bought the Miam Miam Dodo book and love it.