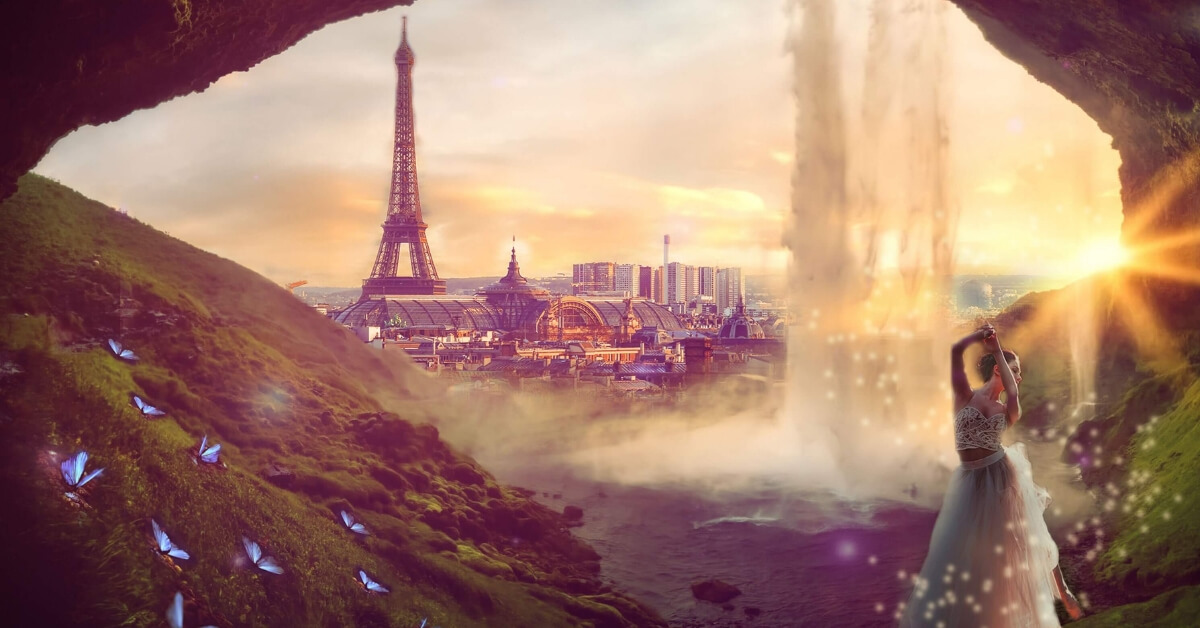 Jessica Terrier is a young tour guide in Paris. On today's episode, she takes us on a walk from Ballet to the Cabaret in Paris. This is a walk she often takes with her customers. Along the way we stop at the Palais Royal, the Opéra Garnier, les Grands Boulevards, the Folies Bergères, and--you can't miss that!-- her favorite café.

She also talks about giving tours of the private apartments in Versailles and about some of the other tours she offers. If you'd like to get in touch with Jessica, email terrier.jessie@gmail.com

From Ballet to Cabaret in Paris with Jessica Terrier

One of the first carousels in Paris was held at the Place des Vosges in 1612, the second one was in 1662, with Louis the XIV, in front of the Louvre Palace, now the Louvre Museum. These carousels parties included walking the streets of Paris in costume, horse races, jousts, plays, fireworks, concerts, and ballet.

Louis XIV built Versailles because he wanted to keep everybody under his control. One of the ways he kept people under control was to keep them constantly busy. The Chateau of Versailles was used for parties only at the beginning.

Jessica starts her visit in the Palais Royal, with the galleries that had theaters and concert cafés. This is the beginning of Music Hall. Today these galleries are just for great Paris shopping, for instance the vintage shop of Didier Ludot who invented the little black dress. His shop in at the Palais Royal, galerie Montpensier.

Next, Jessica likes to go to the Opera, via avenue de l’Opéra, and explains how the Baron Haussmann transformed Paris and the creation of the Opéra Garnier. This took place under France’s Second Empire, and the Emperor was Napoleon III. The idea was to create wide avenues with beautiful buildings at the end.
Haussmann didn’t get the contract to build the opera, it was given to the architect Garnier instead and this made Haussmann jealous. So Haussmann gave Garnier a very strange octagonal square with was difficult to work with. When you look at the Opéra Garnier from the avenue de l’Opéra, the building is hard to see because it is not placed in the right persepective. Tis was done on purpose to get back at Garnier.

It’s possible to book a group tour inside of the Opéra Garnier, but it takes some advance notice. The best way to enjoy the Opéra Garnier is to attend a ballet or opera.
Jessica can provide tours for any number between 1 and 25 people. She doesn’t have a minimum.

From there Jessica takes you to the Grands Boulevards, she likes to go the Passage Panorama and explain the evolution from ballet to the concert café and to the cabaret.

Ballet dance evolved a lot technically between the 17th and 19th Century. In the 19th century dancers were really popular in France because they were beautiful and free. They didn’t get married but rather had a lot of lovers. These wealthy lovers gave them gifts and cash. Other women in France envied them because these women didn’t marry, didn’t have children (or if they had children they didn’t care about them very much), they went on stage and had a free life. Cabaret came to be in the wake of this freedom the dancers experienced. Cabaret put forward very sensual dance, the dancers were almost naked at times.

Mistinguett was one of the most famous women in Cabaret. She was the “reine des années folles” or the queen of the 1920s.
All the names in ballet steps come from traditional dance steps in French folk dancing. For instance the ballet step call “Pas de Basque” was inspired by traditional dance from the Basque Country.
Jessica ends her tour at the Follies Bergères where you can still see a Cabaret there, today it is the Mugler Cabaret. You cannot visit the Folies Bergères unless you attend a show, but the Art Deco façade is beautiful.
Jessica does this visit with her iPad, that way she can show you the dance and the music.

Jessica also talks about famous American Josephine Baker and how she came to Paris and danced the Charleston.

Café to End the Tour

Jessica ends her tour at Delaville Café right by the Bonne Nouvelle subway station. This building used to be a house of prostitution. The decor is beautiful, the coffee and pastries are great too.
Other tours Jessica can do for you: she can take you right to see the Mona Lisa in the Louvre, she also does a discovery of the private passages, she can adapt her tour to include children, when doing a dance tour she’ll teach the children a few dance steps and they love it.

Tour the Private Apartments in Versailles

The tour in highest demand for Jessica is Versailles. She has been giving general tours in Versailles, but she can now also give tours of the private apartments inside the Chateau. This is a much nicer tour because there are no crowds and you can visit the theater, the church, and the private apartments. You can only do this with a tour guide that has this certification and she does. This is the very best of Versailles. This sort of tour can be setup pretty easily with a few days of advance notice.
Jessica can meet you at your hotel, take you to Versailles on the train, get to know you on the way, and show you all the things that you are particularly interested in.

3 Replies to “From Ballet to Cabaret in Paris, Episode 53”