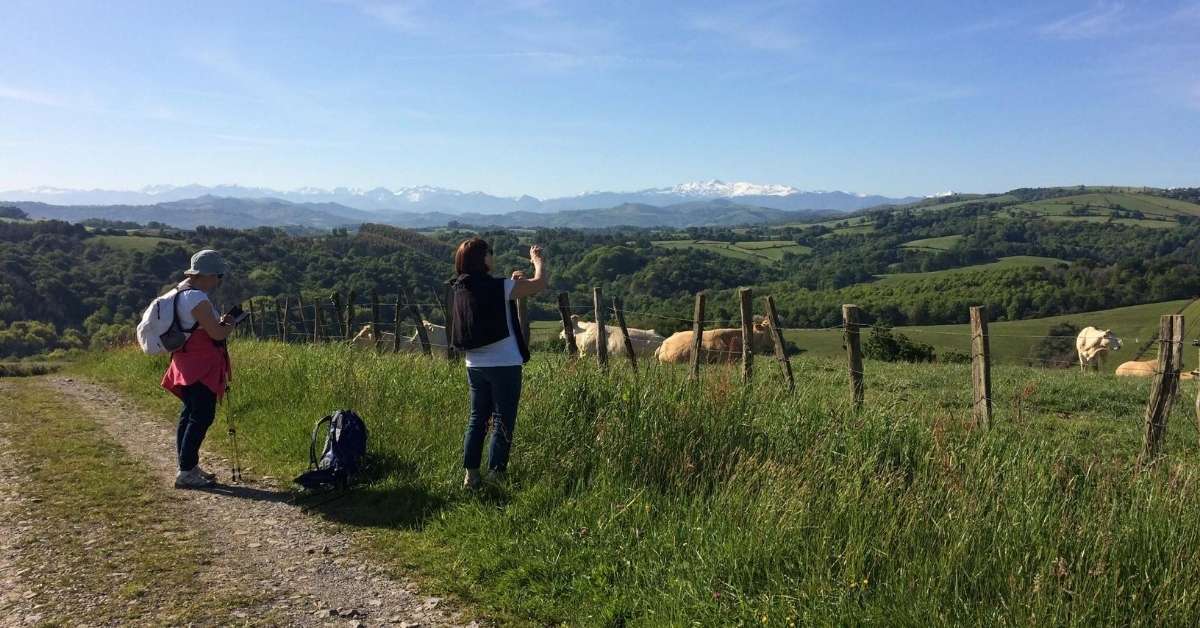 Categories: Active Vacations in France, France How To, Off the Beaten Track in France

On average there are about 100 people walking the French Chemin de Compostelle per day. But as we'll see in the episode, the Spanish part of the Camino is a lot busier with around 1000 walkers per day. It's still perfectly safe, even for a solo woman traveler.

There are many ways to get to Saint-Jacques-de-Compostelle or Santiago de Compostela in Spain. Lisa took the Puy route or via Podiensis, which is the most popular route in France. But she could have taken the route that starts in Paris, or the one that starts in Vézelay or Arles.

You'll get to use your French on the Chemin!

Lisa had a wonderful time in part because her French is quite good and she can have entire conversations in French. Knowing French is not a must, but if you can speak French you'll have a better time. Won't English be enough? Not everywhere. Remember, you'll be in rural France where most people aren't comfortable speaking English.

One instance where speaking French is particularly helpful is when reserving rooms for the next night. It's possible (and sometimes advisable) to plan it all out and make your reservations weeks in advance from home, but what do you do it there's a rain storm that delays you? How about a blister that forces you to slow down considerably or even stop for a day? If you're comfortable speaking French on the phone, all of these things will be a lot easier for you.

And speaking of making reservations, find out when holidays and school vacations are because those nights will often be booked up in advance!

Walking the Chemin in Sections

On this particular trip in 2019 Lisa walked between Cahors and Saint-Jean-Pied-de-Port. 4 years prior she had done the section between Le Puy and Cahors, so she just picked up where she left off. Walking in sections is the most popular way to walk the chemin because most people have to go back to work and can't do it all in one trip.

Practical Considerations when Walking the Chemin

It took Lisa 3 weeks to complete the section between Le-Puy-en-Velay and Saint-Jean-Pied-de-Port. That was walking 12 to 14 miles per day every day (which is 16 to 20 km per day). It takes some training to do this comfortably even if you're used to walking an hour with your dog every day. But the chemin is not technically difficult, it's just about building stamina.

Are you thinking about backpacking it?

Lisa carried her backpack and did not use a service to move her belongings around. But, when walking the French chemin de Compostelle you can travel light. You don't need to take a tent or cooking implements, there will be grocery stores and restaurants many places along the way. You won't be  walking in the wilderness but rather in the French countryside. There will be  villages, cafés, shops, pharmacies, at least in the bigger villages.

There are transport services that will shuttle your bag between stops. They can also drive a person to the next stop if a walker in your party needs a break from walking. You'll find business cards for transport services at all the gîtes, so this is not something you need to arrange in advance.

This is nothing like walking the Appalachian trail where you might be in the wilderness for days. The availability of frequent places to stop also means that you could decide to walk just 10 kilometers per day if that's more comfortable for you. But be aware that not every village has places where you can buy food, always carry some with you just in case.

You do need a change of clothes, a jacket, toiletries, a towel, and a "sac à viande" or sleeping bag liner. You'll use it when staying places where they don't give you sheets. But if you're planning on staying at regular hotels rather than "gîtes"  (youth hostel-like guest houses), then you won't need one.

There are many places along the way where regular hotels are not available, so you'll need to make-do with basic accommodations such as gîtes. On the French side even the cheapest accommodations provide blankets, and you can often rent sheets for a few euros. But do bring your own toiletries and a light-weight bath towel.

Walking with a backpack is more difficult, but if affords more flexibility in your schedule. A general rule of thumb is a pack that is no more than 38 liters. That's enough to hold a change of clothes and some flip-flops. You'll probably also carry some snacks and maybe a lunch to hold you over until the next stop, but that's never more than a few hours away.

Walking a long way every day can be hard on your knees. Walking with poles can help a lot, especially if you get poles that fit your needs well. Consider poles that you can take apart and put in your backpack. There are poles made for women that fit their hands better. Annie prefers aluminum poles because they don't tend to vibrate when hitting the ground.

This book is the Bible of the Chemin in French, it lists all the places you can sleep and eat and it's a favorite of French walkers. The app will show you where you are on the map. You can download the map when you're on-line so it'll work even if you're in the middle of nowhere. The book and app will also tell you how far to the next place to fill up your water bottle. Unfortunately it is only available in French.

What sort of shoes do you need?

You probably don't want simple sneakers, but you don't need heavy hiking boots either. Light hiking shoes are good, something like Merrels.

French people and their blisters

French walkers are concerned with taking good care of their blisters (ampoule in French which also means lightbulb). To do so they run a thread through the skin and it acts like a wicker. If you don't have the thread the skin will heal itself and the blister will not empty for a long time. Alternatively any French family doctor can cut out the thick skin and it'll allow the blister to heal within a couple of days.

Be really mindful of meal-times

You'll be walking through rural France so you must pay attention to meal times. Restaurants stop accepting customers after 1:30 PM for the lunch service. Rural grocery stores may close for lunch, they may also be away on vacation. Again, it is wise to carry some food with you.

Lisa's stops along the way

17 minutes into the episode Lisa starts explaining the path she walked and where she stayed. They are also listed in the Guest Notes (blue button below).

The whole point of walking the French chemin de Compostelle is to walk. There are no particular attractions along the way, although you will run into some gorgeous churches and abbeys you'll want to visit. And there are, of course, beautiful rural vistas.

Be aware that many of these really scenic villages are dead unless you happen to be there on a week-end or school vacation. These are also places where it might be hard to get a meal because there aren't grocery stores.

Pack ear plugs because you will run into snorers and at a hostel you can't always get away from them!

Lisa has traveled around the world by herself sometimes as was the case for her 2019 trip to walk the Camino. She never felt unsafe while walking or at any of the stops. Everyone was considerate and friendly.

You will probably keep running into the same people and will get to know them quite well so it won't feel lonely.

Some parts of the Camino are really busy

Whe you're walking the French Chemin de Compostelle you'll run into 90% French people. As soon as you get to Saint-Jean-Pied-de-Port you'll suddenly be surrounded by a lot more people from all over the world. There are 10 times more people hiking the Spanish side than the French side.

The best part of this walk is hanging out with other walkers at the gîte at night. French people love to socialize around a meal and most gîtes provide the evening meal. Most are great cooks, one wasn't (see guest notes). You'll meet a lot of like-minded people and chat about all sorts of things. Wine will be served with dinner, but you probably won't run into much wild partying.

Categories: Active Vacations in France, France How To, Off the Beaten Track in France