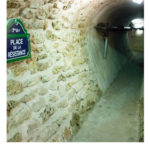 Should You Visit the Paris Sewer?

Where Is the Paris Sewer? When Is It Open?

The Paris Sewer is now closed until late 2020. Check their website for news!

The entrance to the Paris sewers is near the Pont de l’Alma near 93 quai d’Orsai and place de la Résistance in the 7th arrondissement. This museum is open to the public Mon, Tue, Wed, Sat, and Sun 11 AM until 5 PM May 1st thru Sept 30th and 11 AM until 4 PM. In other words, don’t assume it will be open when you want to go, it is always closed on Thu and Fri and for two weeks in January.

Incidently, you can get a nice selfie with the Eiffel Tower in the background from that location.

Sewers are vital to human health, that makes this place important in order to understand how Paris was able to grow and thrive. Without sewers, we’d still be an under-developed civilization. The Paris sewer is very old and very large. There are 2100 kilometers of sewers running under Paris.

This visit is good because you are actually walking inside the Paris sewer, this is not some sort of reproduction that shows you various stages of the sewer. The visit does not dwell on the history of the sewer and how things were long ago, it is more designed to show off today’s sewer, but here’s a little bit of history to get familiar with before you go.

The first bit of sewer in Paris was built by the Romans and it is under Boulevard Saint Michel. The Romans had sewer long before anybody else, but that tradition was abandoned in the French after the Romans left. That was unfortunate and caused much unnecessary illness and death in the French population.

Until the Middle-Ages, the people of Paris took their water from the Seine river and dumped both black and grey water into the streets (which were made of compacted dirt at the time) or into open fields. Sewage eventually ran back to the river.

In 1186, French King Philippe Auguste decrees that major Paris streets need to be paved with a gutter in the middle.

In 1370, Hugues Aubriot, the Prévôt de Paris, builds the first proper sewer tunnel (built of stones and cement) under rue Montmartre and this tunnel takes the sewage to a stream that does not exist any more called Ruisseau de Ménilmontand. The rest of the Paris sewage is still open-air.

Over many decades, more of the the Ruisseau de Ménilmontand is  turned into the sewer until none of the original stream is left. Under Louis XIV a large sewer is built under the Grand Boulevards.

But today’s Paris sewer didn’t develop fully until Haussmann and an engineer called Belgrand who greatly improved the Paris sewer and clean water distribution systems. By 1878, the Paris sewer is 600 kilometers long.

For safety reasons, you cannot wander around the sewer by yourself. You will have to join a tour group. Our guide spoke French and was not particularly interesting. The acoustics are bad in the sewer too. The displays are in French and in English, but we’re not sure if tours are available in English.

The original Paris sewer was designed to work with gravity only and they’ve always had a problem with deposits and things getting stuck in the tunnels. The people who work the sewer, even today, a major part of their job is to get things moving along. Over the years there have been many methods to do this and the technology has improved, but it’s still a dirty job to say the least.

There used to be a lot of sewer workers in Paris, by now there are only about 300 “égoutiers” because they use a lot of machines to do the work nowadays. That is a good thing because the smell is truly vile and probably dangerous to your health with long-term exposure. Annie had a hard time not throwing up from the stench and was very glad to get out of there.

The displays inside the sewer are interesting and bi-lingual, but it is difficult to read very much because the displays are positioned over metal grates over the sewer, you get the full effect there! Annie wanted to get out and buy a book at the museum store. That plan didn’t work out because the museum store has very little in it, a few postcards is all she can remember.

At the Paris Sewer you will see many examples of dredging balls and dredging tools, including a massive wooden ball that comes apart to be lowered into the sewer, then is reassembled, and let loose into the large tunnels.

Being an “égoutier” is often a family affair because it is not a job for the faint of heart. At the end of the tour you will see a display that shows the pedigree of sewer workers who are brave enough to take on this profession. In some families, they have been working the sewers for many generations. Never mind putting up with bad odors, sewers can explode due to the methane content—you can actually see methane bubbles coming up to the surface! Sewers are also dangerous because of water pressure. Workers can lose their footing and be carried by the current.

The Sewer Museum also talks about water reclamation in the city of Paris. For instance, at the end of the tour they display a Wallace Fountain where the people of Paris could go get clean water years ago when most homes did not have water pipes.

The sewer also shows what they have to do to deal with water runoff and in case of flooding. This was particularly salient because of the Spring 2016 floods in Paris.

Rats in the Paris Sewer

We did not get to meet Ratatouille on our visit, but they do talk about the importance of rats who have always been helpful inside of the sewers. Sewer workers want the rats to eat organic matter and get rid of most of that bulk. The rats eat whatever organic materials they find, grind it down and digest it. It keeps the tunnels flowing a little bit easier.

Should You Visit the Paris Sewer or the Catacombs?

If you need to make a choice between seeing the Paris Sewer or the Catacombs, which do we recommend? Unequivocally, the Catacombs. The wait to get into the Catacombs is long (typically 2 hours), but you can get your tickets in advance and you should!

The Paris Sewer is definitely interesting, but a little bit hard on the gag reflex. Don’t go in heels because you’ll be walking over metal grates. This is the sort of place that is educational if you are with children. Don’t go right after a nice meal and don’t plan a nice meal right after visiting the sewer because you will have that smell in your nose for several hours after the visit is over.