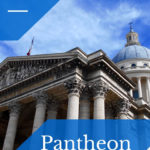 The Pantheon in Paris: at the Heart of the Latin Quarter

It’s in the 5th arrondissement, at the center of the Latin Quarter. It’s on one of the hills of Paris called Montagne Sainte-Geneviève, which is the name of the church that used to be there where the Pantheon now stands.

Other Things You Can See Near the Pantheon in Paris

The Lycée Henri IV is France’s most prestigious public high school. In France you’re assigned to a public high school based on your address, but that one is somewhat different. 40% of their students are locals, but the rest have been noticed as outstanding and sent there.

They also have highly selective prep classes after the baccalaureate, a lot of brains both dead and alive in the neighborhood! You cannot visit the high school, but I wanted to mention it because it’s a big deal in French culture.

Église Saint-Étienne-du-Mont which I think is one of the most gorgeous churches I’ve ever seen. It is flamboyant Gothic style, absolutely a must-see, I will certainly do an episode about it because I liked it that much, but that’s for another show.

When you’re at the front of the Pantheon and you look down the street (called rue Soufflot) what you see 400 meters away is the Jardins du Luxembourg, and in the distance you’ll also see the Eiffel Tower which is about 4 km away from the Eiffel Tower.

I hope next time I go it’ll be better weather because that would make for a nice picture, from the steps of the Pantheon looking down onto that lovely rue Soufflot, the green of the park and beyond the Eiffel Tower.

There’s a lot more to see right in that area, even if you decide not to go in the Pantheon, you’ll probably walk near it at some point.

The Pantheon in Paris

There are buildings called Pantheon all over the world, most notable one is in Rome, but that one is a Roman Catholic Church. The Pantheon in Rome was built in the 1st century and the one in Paris was built between 1764 and 1790, much more recent and definitely inspired by the Pantheon in Rome.

The style is neo-classical. But, this is where the similitudes end: the Pantheon in Paris is a burial place and a decidedly secular YET cathedral-like building. The word Pantheon comes from the Greek and means something like “to all the Gods”. So it’s a building that honors the Gods of French culture such as: Voltaire, Jean-Jacques Rousseau, Victor Hugo, Émile Zola, Jean Jaurès, Jean Moulin, Pierre and Marie Curie, André Malraux and Alexandre Dumas just to name a few.

Entry is 7.5€, FREE under 18, there are reduced prices for students, etc. It will not break the bank.

First Impressions of the Paris Pantheon

It’s HUGE, 360 feet long, 275 feet wide, AND 275 feet tall. These are exterior dimensions, but when a building is as tall as it is wide you really feel it when you get inside. To me it felt too big, cold and impersonal. Definitely stately and grand, not warm and fuzzy.

It is a masterpiece of architecture, designed by an architect named Soufflot who had big dreams. But time did its magic and it was in need of TLC. Issues came from the tremendous pressure exerted on the arches, the fact that the roof was not totally water-proof any more, and that the rebar reinforcements were rusting.

The dome is being restored right now (June 2015 if you’re listening to this in the future. Hello future!) Work started in 2013 and section by section will be completed by 2022. 19 M euros. They use a huge crane, they had to build special scaffolding just for this, they cover and protect all the areas they’re not working on, it’s a massive undertaking, they are replacing stones.

To the Great Minds and the Great People of France

Four new people were given the honor to be moved to the Pantheon on May 27, 2015. This is called “Pantheonisation “ in French which as far as I know has no English translation thus far. They are 2 men and 2 women, and I must admit that the fact that which giving a 50-50 parity is amazing at this point! Their names are  Pierre Brossolette, Geneviève de Gaulle-Anthonioz, Germaine Tillion et Jean Zay and this happened on May 27th,  2015

Here’s the conclusion of the speech French President Hollande said on this occasion, I’ll let you listen in French, then I’ll summarize what he said at the end.

There are people recognized at the Pantheon but not buried there because we don’t have a body: for example Antoine de Saint Exupery.

Is the Pantheon in Paris a Must-See?

So, if I was taking friends or family to Paris, would I take them to the Pantheon? Maybe. I would NOT take children or teens unless it’s Halloween because the Crypt is quite spectacular.

I would NOT take persons with mobility issues. It is NOT accessible to wheelchairs. There are 38 steps to go down into the Crypt and 16 steps total just to get into the main part. Not a big deal for most people, but if you have someone in your group with mobility issues, it’s not a good place.

The Dome of the Pantheon by JR

For instance the painting that adorns the inside of the dome is prime real estate and has changed a few times. Right now you’ll see a work by an artist called JR who collated the faces of thousands of people and it’s supposed to represent all of humanity. It’s really cool-looking and very striking, I loved it.

How the Inside of the Dome Changed over Time

But Napoleon 1st commissioned someone called Antoine-Jean Gros to paint the ceiling in 1811. In four years Gros was told to change the theme 4 times: Napoleon at first, then Louis XVIII, then back to Napoleon, then Louis XVIII again. It mirrors the changes in French political life.

A Building in Flux

Greek influences? Christian influences? Masonic influences? Yes to all of the above. If you spend some time and look around, you’ll see some of all of those and that it had a hard time deciding what it wanted to be when it grew up!

Victor Hugo and the Pantheon

When Victor Hugo died on May 22nd 1885, it was decided right away that he would be buried in the Pantheon. He was given a state funeral and taken to the Pantheon on May 31st, 1885. That marks the date when the Pantheon stopped being in flux. It was going to be a burial place for the greats of the nation, and it’s likely to stay that way now. Thank you Victor Hugo for that, and many other things!

The Structure of the Pantheon in Paris

The one sandwiches in the middle? I’m not sure to tell you the truth! You can see it on the scale model. Can you climb up to the dome and see it close-up? I know it’s been possible at times, but I didn’t think to ask when I was there and I can’t find the information on the website. I’ll call and put an update about that on the show notes.