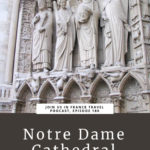 [00:00] This is Join Us in France Episode 180. Join Us in France is the podcast for where we talk about France, it’s many quirks, it’s history, it’s language, and of course, destinations in France you want to learn about because, hopefully, you’ll be visiting soon!

On today’s episode I’m going to tell you the story of the gallery of kings, about some Bible Stories you can easily find at Notre Dame and give you some help recognizing the saints in French churches.

[01:00] Notre Dame Cathedral is over 850 years old. Oh, the things it must have seen! But while Notre Dame cannot tell us all the things that happened within its walls, we can pay attention to what the art is telling us. So, let’s look around together and open your eyes wide.

An Episode Dedicated to the Curious

Occasionally I see someone in a Cathedral, even at Notre Dame, who doesn’t seem engaged in the visit at all. Some of them, came all the way from the other side of the world to see it, and yet they walk around in there looking engaged blasé. Maybe they don’t understand what they are looking at.

I know we’re all busy and we don’t have time to do lots of research before we visit go places, but curiosity is good when traveling. So, here’s an episode dedicated to the curious traveller!

Gallery of Kings at Notre Dame Cathedral, which I like to call the Decapitated Kings

[02:01] So let’s start strong with the story of decapitated kings. High above the 3 entrance portals of Notre Dame, the sculptors of the Cathedral placed 28 Kings.

They all stand in one row, all wearing crowns, all looking down on their people. This is called the Gallery of Kings. I’ll put photos on joinusinfrance.com/180, because it’s best if you can look and see what I’m talking about.

Description of the Gallery of Kings

[02:41] But for those of you who can’t look at them right now, let me describe it a little bit so you can picture it.

Think of the main facade of Notre Dame. There are 3 portals or doors. Above the doors is a long horizontal line of statues that takes up the whole width of the Cathedral. That’s the Gallery of Kings.

Above that is a balcony, called the Virgin’s Balcony, above that is the the western rose window in the center, and something that looks like more portals to the sides.

And above that again there is a row of columns, then the Gallery of the Chimeras across the whole width, and finally the north tower on the left and the south tower on the right.

The Gallery of Kings is probably 35 feet off the ground and the statues are 15 feet tall, they are massive.

It’s Hard to See Without Binoculars

When you go visit, I recommend you bring binoculars or a zoom lens because even though the statues are very large, it’s hard to see from the ground without some help. But if you go to joinusinfrance.com/180 you’ll see it all very clearly because I have a great zoom lens and I love to take pictures of Cathedrals to share with you.

Who Are These Kings?

[03:36] The thing is, those statues from the 13th century weren’t labeled or signed and people didn’t know who the Kings they were. People assumed they were the Kings of France. They all have crowns, they all look down on you, yeah, why not, French Kings!

Revolutionaries were not fond of French Kings as you know, so, in 1793, they climbed up there and vandalized the statues. Notre Dame was in a pretty sorry state by the end of the French Revolution as we will see later, and breaking the statues didn’t help any.

[04:32] Chopping heads off was a thing during the French Revolution. They started with chopping off the heads of the stone Kings, and Louis XV was next 3 years later. He could have taken the hint and abdicate, but he didn’t.

Once the heads were down, the people of Paris had a little bit of fun hitting the heads of the Kings, breaking things off. But I mean they are made of stone, you can’t make much of a dent if you’re kicking them with your shoes. Most of the damage happened when they fell down.

[05:04] At some point in 1793 or 1794, a man called Lakanal, owner of a hotel near today’s Opéra Garnier (but the opera wasn’t there yet), decided that he wanted to take the heads and put them in a big basement room between his hotel and a bank adjacent to his hotel.

How he pulled that off, I don’t know! The distance between Notre Dame and his hotel is about 3 kilometers. And hey, I’ll put a link in the show notes to that hotel just in case you want to check it out. It’s still there and it’s still a hotel!

Why Did Lakanal Hide the Heads?

[05:39] Some say Lakanal took the heads to protect them from the indignities inflicted by the vandals, others say he wanted to use the stones for something. I don’t know his motives.

But he put them there deep under his hotel and walled them in, and they were forgotten about. Why did he wall them in? Maybe he was worried that he’d get in trouble for stealing them? I don’t know.

How the King’s Heads Were Found

[05:57] Then move forward 200 years to 1977. The hotel is still there, and it needs to do some renovations that involve breaking down that wall. And, surprise! The workers find 21 big giant stone heads behind the wall!

Current owners had no clue more than 400 artifacts from Notre Dame Cathedral had been lying under their feet since the French Revolution! Because Lakanal didn’t just take the heads, he took everything he could!

[06:35] Historians and archaeologists came to investigate and eventually the heads were removed and placed inside the Cluny Museum.

Experts learned a lot from those heads. One thing in particular was that this proved that the original statues that adorned Notre Dame in the 1300s were painted.

Notre Dame Cathedral Used to Be Painted in Bright Colors

[06:57] Much of the exterior of Notre Dame was painted in bright colors back then. It’s hard to fathom today because we always see Cathedrals in their natural stone color (or with layers of gray pollution depending on when the last renovation took place), but most of them were painted!

And not painted white or cream or something. No, no, no, they used bright reds and greens and blacks, they were not afraid of color at all!

[07:27] If you go see the big giant heads in the Cluny Museum, you which I recommend you do, you can still see bits of paint on them! They made some amazing paint in the 1300s because there was still some left 500 years later when the statues stood in the elements the whole time.

I can’t keep the paint on my wooden exterior shutters for more than 4 or 5 years! I want some of that paint from the 1300s!

The Kings’ Heads Were Not Thrown in the Seine River!

[07:53] So, just for the record. I’ve heard many times that the original chopped heads were thrown into the Seine river. I’ve probably repeated that myself, but no, that’s not what happened.

21 of the heads were under the hotel Moreau at #20 rue de la Chaussée d’Antin, near Opera Garnier. We’re still missing 7 heads, who knows, someone might find them somewhere else hidden in a basement in Paris!

The Gallery of Kings We See Today Is a Renovation

[08:25] So, when you go to Notre Dame today, the Gallery of Kings you are looking at dates from a fairly recent renovation effort led by Violet-le-Duc.

Well, recent in France terms, Notre Dame Cathedral underwent major renovations between 1844 and 1864. So yeah, a recent renovation from 154 years ago!

Faces In the Likeness of Modern People

[08:50]Modern sculptors had fun with the faces on the new Gallery of Kings. They kept the overall look the same with the Kings all lined up, they modeled some of the faces after famous people of the time, one of them being the aforementioned architect Violet-le-Duc.

Tell You Kids and Your Friends When You Visit Notre Dame!

[09:19] So there you have it, that’s the story of the decapitated French Kings on the facade of Notre Dame.

Now when you go, you’ll be able to tell your kids about angry Revolutionaries who climbed up there and chopped the heads off the statues.

Tell them to imagine the Cathedral painted in bright colors. And if they don’t believe you that Notre Dame Cathedral used to be painted, walk them to the left side of the church and look closely at some of the statues that are located close to the ground. You can see tiny remnants of paint on some of them!

[09:45] There are lots of Bible stories on all Cathedrals and Notre Dame is no exception. But the one I want to attract your attention to is right in front, above the central door, underneath the Gallery of Kings.

It’s fairly easy to see from the ground, and centrally located, indicating that the designers of the Cathedral didn’t want it to go unnoticed. That was the central story of Medieval Catholic teachings and they wanted people to see it right as they approached the church!

The Devil Trying to Steal Souls

[10:23] The sculpture shows an angel holding a scale in his hand with a supplicant on one side of the scale and devilish creatures pulling on the other side to steal that soul!

And right underneath that you see the a bunch of souls looking quite tormented. Are they the souls of the damned? Possibly. I’m not sure who the angel is either. I assumed it must be Saint Peter since he’s the one who is supposed to let people in to Paradise (or not), but I’ve seen this particular angel referenced as Saint Michael too.

But Saint Michael is the one who slew the dragon, and that one isn’t holding a sword, so I’m not sure. What do you think?

How to recognize the 12 Apostles in a Church

[11:13] Identifying who a statue is is not an easy job. Scholars disagree, but there are some known markers of various original Apostles. Let’s go through them quickly.

[13:53] When you go inside of Notre Dame you will also see painted wooden panels that tell several Bible stories. And those are labeled so we know exactly what we’re looking at!

The picture I’ll share with you on joinusinfrance.com/180 shows Jesus and the Miraculous Fish from John 21. I am not much of a believer at this point in my life, but I’ve read the Bible a few times and I love seeing the art that came out of these stories. Pretty much all of the art in Notre Dame tells Bible stories or the stories of Saints. So when you’re there, look around and see how many you can recognize! 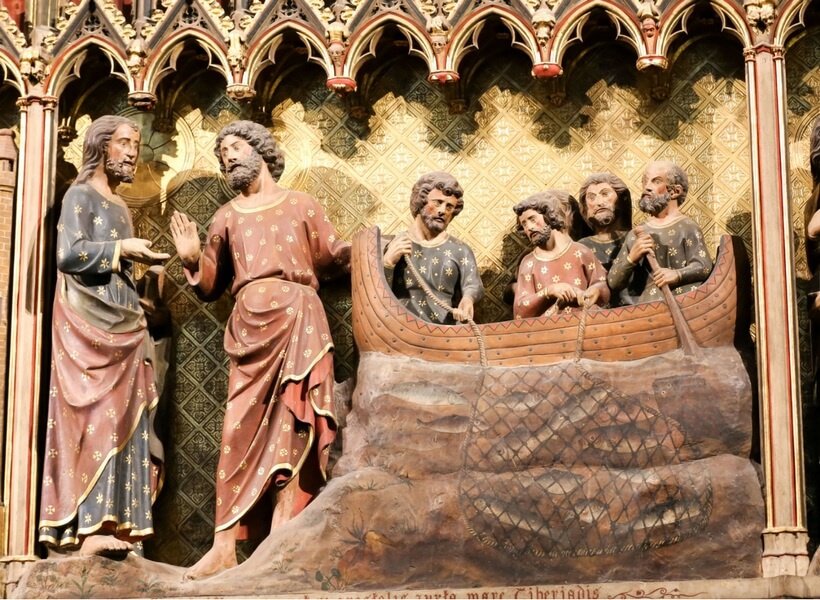 Next Week on the Podcast

[14:35] Next week on the podcast I’ll be telling you another wonderful story that takes place at Notre Dame Cathedral, the story told by Victor Hugo that you know as The Hunchback of Notre Dame.

I listened to the book this week and loved it and I can’t wait to tell you all about it. I haven’t seen the Disney movie yet, I’ll do that this week in preparation for the podcast. See, it’s a rough podcaster’s life when you have to watch movies and read books! And yes, the gallery of kings, plays into Victor Hugo’s story as well.

Thank You for Supporting the Show!

[15:13] Thank you for joining to support the show on Patreon this week Tom Bubnick and Mike Freame! Check out how you can help the show here.

Au revoir, I’ll talk to you next week!