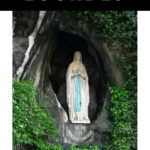 Lourdes, the City of Miracles

7’21” January Sales in France. France has had official 6 weeks of sales early January and July. We explain the difference between the “soldes” and the “promotions”.

14’45” Our discussion on Lourdes starts with the origin of the name. Lourdes is a hilly city in the foothills of the Pyrenees. Lourdes is the city that has the most hotel rooms after Paris. Lourdes is also the third most visited place in France.

How You Can Get to Lourdes

19’00” Lourdes is easily accessible via TGV, bus, car, it is about 2 hours drive from Toulouse. It is in a region called the Bigorre which is part of Gascony. Lourdes has a wonderful château that is wonderful to visit. Unlike the castle of Foix, this castle is fairly easy to access and it has a very nice museum with interesting local items from pre-historical times until today.

The Geography of Lourdes

22’45” Lourdes is separated in it lower and upper part. The lower part is where the Sanctuary is located. The upper city has a lovely market, many hotels and restaurants, etc.

24’30” The area had strong textile and quarry activities, with an area that has a lot of water and gneiss rock which looks like granite but is not. There is also natural radioactivity in the area. People have been going into the grottoes and having visions for a long time.

26’30” The major river in Lourdes is the Gave de Pau, it is a fast-running mountain river in an area . When you walk along the river you will see many grottoes and many natural springs coming out of them.

28’00” The Holly Grotto is a small place that doesn’t go very far into the rock.

The Story of Bernadette Soubirou

28’50” The story of Bernadette Soubirous. Bernadette Soubirous was 12 years old in 1856 (Elyse got some of those numbers wrong on the show) It was 160 years ago, which is not very long in the grand scheme of history. Her family had become destitute, they lived into a troglodyte house and she had never been to school. But she was very religious as were most people at the time.

31’00” Bernadette Soubirous’ Vision. One day Bernadette separated from the youth she was with to gather up some wood and as she turned around she had a vision at the place where pilgrims go today. She saw a beautiful young woman with flowers on her feet, dressed in white, and a blue sash around her body. She told people that she had this vision, but they didn’t believe her and through she was crazy or something.

Over the next few months she had eighteen of those visions. After her seventh or eighth of her visions local people started saying that this was a miracle but she insisted there was no miracle, but that she was having this vision every time she went to the Grotto.

33’20” The reaction from the clergy. The local priest worried when he started seeing people who visited the area where Bernadette said she was having the visions. They wanted to see if they too would have the vision, but they didn’t.

33’40” Historical context surrounding Bernadette’s visions. This is all happening under Napoleon III, France has gone through the period of the Revolution with its hyper secular attitudes, the Restoration of the Monarchy, another Republic and then Napoleon III and the Catholic Church was very skittish. The local priest asked the Bishop of Tarbes to come sort things out.  Bernadette told the Bishop that the woman in her vision told her that she was “the immaculate conception” and spoke Occitan, the common language at the time in the South West of France.

35’30” The Immaculate Conception was a new doctrine in the Catholic Church (only 4 years old) and the Bishop was thrown back when he heard the term in the mouth of a young illiterate girl.  Elyse explains that Immaculate Conception means that the Virgin Mary herself was conceived without intercourse. See here for the actual explanation which is a little bit more subtle than that.

This is not a concept that was widely know at the time (or today apparently!) so the Bishop contacted Rome and asked for this case to be examined and by the time her visions had stopped (18 visions in all) the church had decided they were legitimate.

How the Pilgrimage Begun

37’00” Pilgrims start to come to the place where the visions took place soon after her visions were officially deemed legitimate because one of the things the Virgin Mary reportedly said to Bernadette is that if she were to dig behind where the Virgin was a spring of water would come up and the water would cure people.

Bernadette dug a little bit and there came the spring. That part is not unlikely, there are natural springs everywhere in the area. But this particular spring was particularly strong and has never dried out.

38’25” People started reporting that they were cured of various ills after visiting the area and drinking the water and the church decided that they needed to control what was going on.  The Catholic Church was under attack in France and wanted to make sure to handle this situation as well as possible. Several panels of investigators were sent from Rome and they all decided that this was legitimate and a holy site.

39’30” Since 1862 when they constructed the first Sanctuary, there have been over 2000 official cures. These are cures where doctors have verified what the person is saying. Lourdes was designated as a place where miracles take place in 1925.

What Happened to Bernadette Soubirou After Her Vision?

40’30” What happened to Bernadette de Soubirous? She was already not very healthy, having lived in very difficult circumstances. She had tuberculosis and various ailments typical of people who lived in poor conditions at the time. The church sent her to stay at a convent so hopefully she could get better. She didn’t want to stay in the woods in Lourdes because she did not want to become an attraction.

She didn’t want people to seek her out and touch her, etc. At age 14 she went to live in a convent in Nevers in the center of France where she learned to read and write, did a lot of good works, was an interesting person who died at the age of 35 from tuberculosis. After her death members of her family managed to pay their cards right and became more prosperous, owning some hotels, etc.

42’40” Eugenia, the Spanish wife on Napoleon III, was a patron of the arts and also very devout. In the 1860s she took the train with her entourage and went on a pilgrimage to Lourdes and made it widely known. This brought masses of visitors and it hasn’t stopped ever since.

44’20” The first church was constructed in the 1860s directly above the Grotto, the second was built-in the 1890s and now there is a third one underground that was built-in the 2000s. If you enter the gated area you can walk through all of it. Don’t miss the entrance to the very large underground church in the middle of the esplanade. Dogs cannot enter the area (Annie found out the hard way!)

48’00” There are times in the year (middle of the summer normally) when there are hundreds of pilgrims and the personnel needed to care for them and the Grotto may be closed to non pilgrims. It is a very moving sight even for people who are not there for the pilgrimage. The last miracle happened in 2003. There are plenty of people who go out of gratitude and curiosity.

What You Can Do in Lourdes Besides the Pilgrimage

55’20” What can you do in Lourdes outside of the pilgrimage? The château fort is great, you can do it as a self-guided tour. There’s also the Pic du Jer funicular, there’s also the maison natale Bernadette. Keep in mind that Lourdes is very hilly there are city buses if you’re not up to the walk. The nearby city of Pau is also well-worth a visit. Tarbes is worth it if you like horses. Bargnère-de-Bigorre is also nice and not far.