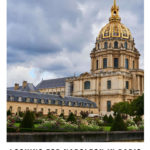 Napoleon was born and died on an island. He was born on the island of Corsica, in Ajaccio. You can visit the house where he was born which has been turned into a pretty nice small museum. Napoleon spoke French with an accent  because his first language (Corsican) was closer to Italian than to French.

Napoleon went to the officer’s school Ecole Militaire southeast of the Champ de Mars.  He was not well-known or well-regarded because he came from a modest noble family, but by age 24 he had reached the rank of General. In those days most men didn’t make it to General until their 40s.

He was elected Emperor in 1804 and he was extremely popular with the people. Napoleon made major changes to Paris. Back then, Paris only had mostly small streets and Napoleon decided to create major boulevards such as rue de Rivoli.

Strict Controls and the Beautification of Paris

And to keep it a safe and beautiful street he didn’t want any bakers or butchers to establish their business there. And this is still true to this day, no butchers or bakers on rue de Rivoli!

Street Numbering Gets Better Under Napoleon

Napoleon also instituted odd and even street numbers on opposite sides of the street. Finding specific places along a street used to be very difficult because there were no numbers, this was a major advance.

Napoleon also insisted on cobblestone pavements to separate where horses and carriages went and where people went. Putting in pavement was expensive and time-consuming, so they started in the center of Paris and branched out as far as possible.

The Beautification of the Louvre Under Napoleon

Napoleon expanded on the Louvre building and made it beautiful, and he turned it into a museum.  He wanted to make Paris the world capital of the arts. Napoleon either bought or stole art from all over the world.

There are two Arc de Triomphe in Paris, one near the Louvre (Arc de Triomphe du Carousel) and the other at the top of the Champs Elysées. It was build almost overnight.

Bringing Clean Water to the People

Napoleon was concerned about bringing water close to people’s home so he commissioned many fountains to be built-in neighborhoods to bring drinking water closer to the people.

Napoleon Invented the Baccalaureate and the Legion of Honor

The Légion d’Honneur was also instigated by Napoleon. There is a small museum near the Orsay museum that has to do with military orders, medals, honors.

Napoleon is buried at Les Invalides. But his body was marched under the Arc de Triomphe on the way to his resting place.

Napoleon was exiled to the island of Elba, then he came back to France during the 100 days. There is a great movie from 1970 called Waterloo, and it’s a great movie to learn about Napoleon and his battles. Monsieur N is another great movie about Napoleon, especially if you’re interested in what happened in Saint Helena.

Napoleon and the British

The British never recognized Napoleon as an Emperor, they always called him General. After his loss at Waterloo, the British exiled Napoleon on the island of Saint Helena which is in the middle of nowhere.

Napoleon may have been poisoned, but it’s more likely that he died of stomach cancer just like his father. He accomplished a lot for someone who died at age 56.