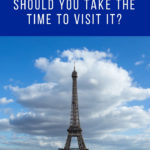 2:40′ Appeal for more iTunes and Stitcher Radio reviews. We want to thank Sandra Goodwin, GenevaGJ, liljackslade2, KRS Chicago for already writing us a review. You too can give us more visibility in the iTunes store by writing us a review and we’ll thank you on an upcoming show.

4:50′ The icon of Paris and France is the Eiffel Tower.

5:15′ It’s called the Eiffel Tower because of the name of the man who built it.

5:50′ Cast Iron made it possible to build large iron structures. Many beautiful buildings are made of cast iron and glass.

7:00′ Eiffel was a bridge builder who entered into a competition to design the entrance way into the 1889 World’s Fair in Paris.

9:26′ The World Fair was to be held on the banks of the Seine river, so that’s where they allotted space for the entrance structure.

10:00′ The people who commissioned the Eiffel Tower wanted something new. The Google Cultural Institute has great pictures of the whole construction process. It is called “The Birth of the Eiffel Tower”

13:20′ People insisted on adding rounded arches in order to make it sturdier, but it turned out to make it prettier.

15:00′ Uproar in the intellectual and artistic community of Paris. The petition of the three hundred who were against the tower.

17:00′ Eiffel and his company built the Statue of Liberty also.

18:00′ The tower was supposed to be torn down after 20 years, but so many people were visiting it that they never tore it down.

18:30′ The Otis company designed the elevators for the tower, that’s why Otis opened a branch in France and they’re still here.

19:30′ The first wireless telegraph antenna was on the Eiffel Tower.

20:00′ The French jammed signals from the tower so the Germans could not use the signals during WWI.

20:40′ It was the tallest structure in the world at the time and lots of famous visitors came, including Thomas Edison, and Buffalo Bill Cody, who were some of the first people to go up the tower.

21:50′ It became an instant success with all the people who wanted to go up the tower.

22:00′ Two ways to go up the tower still to this day: take the elevators or walk. There are 3 levels total. The first level is 300 steps up from the ground. The second level is another 300 steps up. And then there are 1100 steps to the very top.

23:20′ What happened to the tower during WWII? Germans are occupying Paris and Parisians cut the cables so the Germans could not use the tower elevators. At the end of the war the Germans sent a an officer by foot to the top to fly a Nazi flag from the top of the tower. It was blown away by the wind within a few minutes. 🙂

25:00′ There are three levels. What’s on each level? Wonderful restaurant called the Jules Verne run by Alain Ducasse on the second level quite expensive and reservations needed.

26:40′ They are renovating the elevators, so only one bank of elevators is open. The lines are longer now because of these renovations. If you go soon be patient. If you buy your ticket in advance you skip the ticket line, but you still have to line up for the elevator.

29:00′ The elevators going all the way to the top are made of glass, beware if you’re afraid of heights. The very top is great to take photos, but you take photos from behind the Plexiglas. It’s cleaned daily.

30:30′ There is a Champagne Bar on top of the tower
32:00′ They are planning to build a museum of the history of the Eiffel Tower on first level, and a souvenir shop with nicer souvenirs, and also a cafeteria with better food offering than what’s there now. They will also make part of the floor Plexiglas so it’s transparent under your feet.

33:50′ The tower requires an enormous amount of upkeep, it’s painted every other year.

34:10′ Visiting hours. The best way to see the Eiffel Tower at night is not from being on it, but from being nearby. For instance take a river cruise on the Seine river (Bateau Mouches) which all go to the tower and turn around right in front of it. They all stop there so you can see it lit up. Or you can walk along the Seine
River. Or you can see it from the Trocadero.

34:50′ The tower sparkles for 5 minutes every hour on the hour starting at sunset. It changes colors for different holidays.

37:00′ If you’re jet-lagged, slept in one day, and now you need something to do late afternoon and evening, the Eiffel Tower is a great choice because it stays open late.

37:00′ Why are the Bateaux Mouches called that? The Bateaux Mouches are a tourist boat that offer cruises on the Seine River. Those are fun. It could be translated “Fly Boat”, but they look nothing like flies. The name comes from Monsieur Mouche.

39:00′ Bad weather days are not ideal for the Eiffel Tower. It’s nice to walk across the bridge away from the tower, you go up monumental stairs (3 floors) and you get to a wonderful esplanade from which you get a great view of the Eiffel Tower. This area is called Trocadero. A great thing to do even though lots of people don’t know about it.

42:00′ The area right around the Eiffel Tower does not have a lot of restaurants. You will find catering trucks. You can bring a picnic and enjoy it on the grass!

43:30′ Annie tried her Capitol One credit card without a chip or pin number at gas stations and toll booths in France (and Spain) and it didn’t work. It sounds like there are cards being issued in America right now that do have a chip and a pin, but someone told me that those don’t work without being specific enough for the information to be useful. Elyse has a US credit card with a chip but no pin, she says it worked for her. We want feedback from our listeners, can you use your US credit card in France?

47:00′ We need more reviews so we can be more visible on iTunes. Thank you!

Thank you and we’ll talk to you next week!