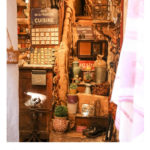 In today’s episode of the podcast we give you great tips about the best way to visit the beautiful village of Saint-0Cirq-Lapopie in the Lot. Have you been? What did you think?

The area around Saint-Cirq-Lapopie has a lot of beautiful medieval villages. There are many English people who live in the area, and also now some Americans. As you drive into the village, you will see wonderful fences made with stacked up rocks. Small narrow roads where you have to drive carefully, it’s very rural, short visibility.

The Lot Department is Rural

The biggest city in the Lot department is Cahors and it’s small with 22,000 people. Figeac is the other city in the Lot and it’s only 13,000 people. So it it definitely a rural area. The Lot also has many small rivers. In the middle ages it was spelled L’Ot in Occitan because it was “the Ot”.

Houses have steep roofs with flat tile in a dark red/brown color and is very distinctive and beautiful. There isn’t a single modern-looking home in the village because the whole village is a historical monument. You will find modern homes further away from Saint-Cirq-Lapopie, but none inside.

Scenic Drive Between Cahors and Saint-Cirq-Lapopie

The other beautiful small village along the Lot river at the bottom of Saint-Cirq-Lapopie is called Bouziès and that’s where you go if you want to walk along the “chemin de halage” (towpath in English). It’s a foot path that you can take along the river, it’s a mile or so, includes a section that’s cut into the cliff. In the middle ages the river was used for transportation and flat bottom boats were pulled by horses or men with harnesses all along the Lot river and many other places.

A Bit of History of Saint-Cirq-Lapopie

Saint-Cirq-Lapopie was first mentioned about 1000 years ago and it belonged to baron de Cardaillac. Saint-Cirq-Lapopie was such a strategic place that it sometimes was ruled by a triumvirate. The triumvirate of Lords in the XII and XII helped the village get very rich because of all their connections. It was a prosperous place for a long time, including the tobacco trade. In the XV and XVI century life moved towards the city and small villages lost of their importance over-time.

Other Things You Can See Nearby

Les châteaux des Anglais, such as the one in Bouziès or Brengues. Those are from the XII century, some don’t have a lot left to them, and they are hard to get to unless you go on a hike.

There are also Renaissance castles to see nearby such as the Château de Cénevières or the Château deLarroque-Toirac. Much easier to see!