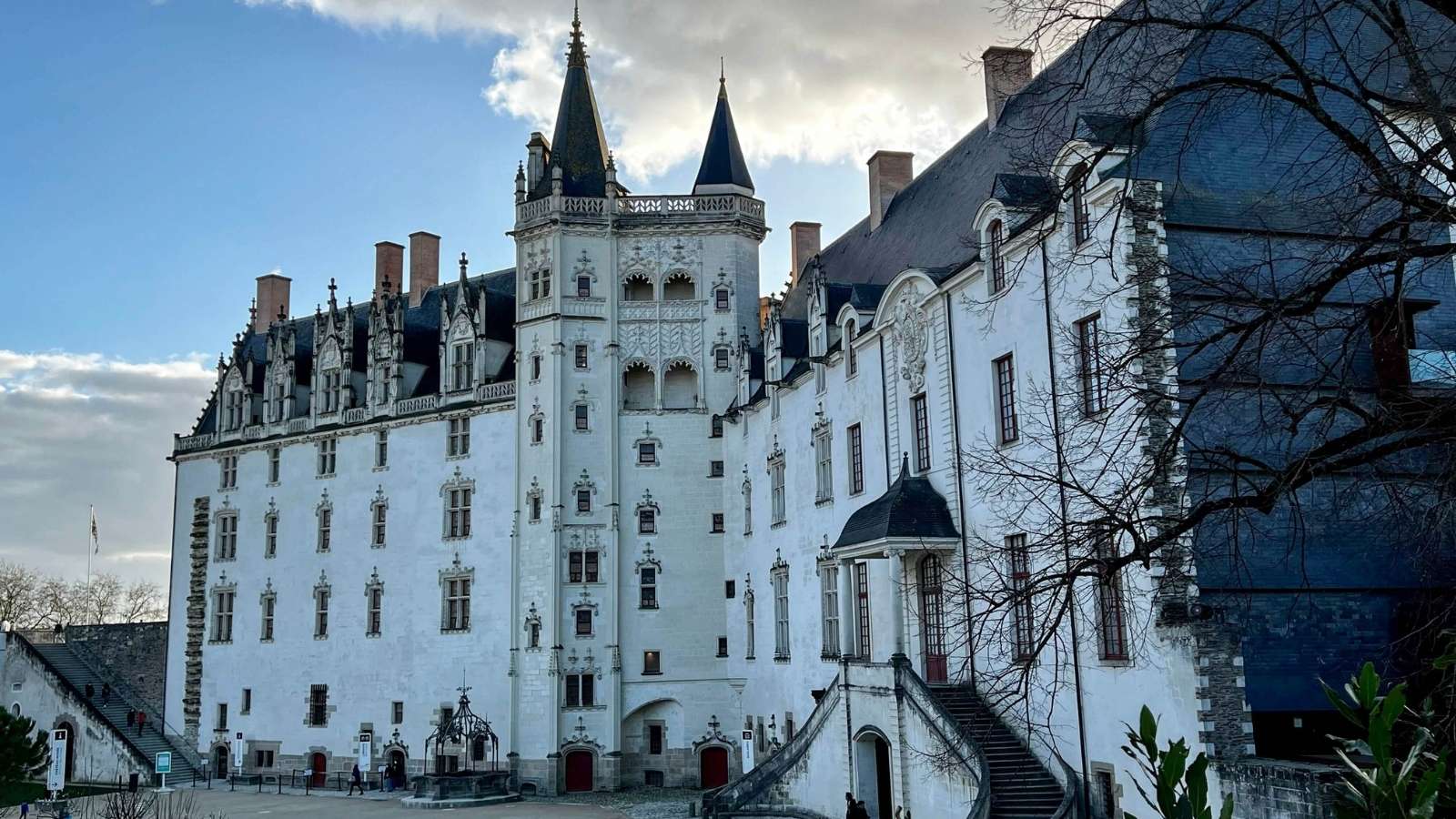 NANTES – The Gateway to Brittany

Nantes is a city on the mouth of the Loire River, as it widens out into an estuary to join the Atlantic about 35 miles further west. City of history and commerce, it is the capital of the department of the Loire-Atlantique. Nantes is 342 km southwest of Paris and 340 km north of Bordeaux. It is 100 km south of its rival, Rennes. Nantes is the furthest western city on the Loire River, 215 km west of Tours and is at the entrance to the southern most part of Brittany.

It is reachable by car, plane and train, from Montparnasse station in Paris or from Bordeaux.

Labelled as a city of Art and History since 1972, it has a lot to offer as a stop on your trip, either going south towards the Charente, or going further northwest into Brittany. Nantes is now a very important university center with many young people, a population of over 320,000 and a major commercial center as it has been since the beginning.

Not to miss in Nantes

Some Goodies from Nantes

The nice crisp white wine, the Muscadet de Nantes is a favorite for seafood and fish. There is also the Gros Plante, another white wine from the vineyards around Nantes.

The Curé Nantais, a cow cheese

All the cookies of the company LU, a huge company that is in Nantes, like the famous tea biscuit Petit Beurre

The Grand History of Nantes

Founded as a fishing port and trading post on the opening to the sea in ancient times, well before the arrival of the Romans, its name comes from the first group of Celts that settled there, the Namnètes. The Romans arrived there and very logically made it their base and called it Portus Namnetum (The port of the Namnetes) at which time a set of ramparts was built around the city. Under the Romans it became even more important as a port.

After the fall of the Roman Empire, in the 400’s, the city came under the control of the Franks, those wonderful Germanic peoples who gave the country France its name! And, at a time of consolidation under the Frankish kings, Nantes was made the capital of their western region. But the people further west in the huge peninsula which is now Brittany, were not part of this empire – they were the Bretons, with their own culture and language and they fought with the Franks for several hundred years over who would rule the region.

Eventually the Franks dominated, and when a certain peace was established, the Dukedom of Brittany was created in 937, with its capital at Nantes. That was the beginning of the creation of the fortified castle of the Dukes of Nantes, which was rebuilt and enlarged over several hundred years.

Now you have to imagine that at this time the dukedom of Brittany was not officially a part of France; it was a feudally allied but separate kingdom and many of the members of the royal family of Brittany fought over who would be the next ruler. But at the same time, the kings of France coveted this vast area and wanted to make it officially part of the kingdom. Why? For its maritime activity, its enormous agricultural land, and for the need to defend the incredibly long coastline against the incursions of the English, their arch-enemy!

Finally, at the end of the 1400’s, the daughter and sole legitimate heir to the throne of the dukedom of Brittany, Anne, was married off to French kings. First to Charles VIII of France and then, after his death, to his first cousin who became king, Louis XII. Now Anne of Brittany was shrewd, well-educated and politically savvy and so she insisted on a marriage contract that sort of annexed Brittany to France but kept it independent in terms of war and taxes.

It was her daughter, Claude, who finalized this alliance and finally made Brittany simply a part of France, when she was married off to François I. It is from this date on, 1532, that Brittany became part of the kingdom of France.

Just a few decades later, in the 1560’s, France lived through a bloody civil war because of the differences between the growing Protestant (or Reformed Church) movement, and the powerful Catholic church. Nantes was a very Catholic city and looked unfavorably on the Protestant population. But ironically, it was in Nantes that the “new” king, Henry IV, wrote and had signed the famous Edict of Nantes, that gave religious and political freedom to all people, no matter what their religion. This very important document, preserved in the national archives, announced the end of the war in spite of the fact that the people of Nantes did not like being associated with it.

Sadly, it was revoked by Henry IV’s grandson, Louis XIV in 1685 but by that time most Protestants had either reconverted back to Catholicism, or fled the country

Nantes is also famous or infamous, in the history of France for being the most important slave trading port in the country. It was in the port of Nantes that ships sailed out to Africa, took slaves from Africa to the colonies in the Caribbean, and then brought back to France the goods produced there: sugar, tobacco, indigo. It was in Nantes that the infamous Code Noir was written that allowed this commerce to continue. At the beginning of the 1700’s, 75% of the slaves captured and shipped to the colonies were sent out on ships coming from Nantes. This made the city incredibly rich and lasted for a long time. It was abolished by the French Revolution, reinstated by Napoleon, and finally abolished for good in 1831. Ironically, some of the most elegant homes still standing in Nantes date from this period and were the homes of families who got rich from the slave trade.

Considering all this background history it is interesting to note that Nantes took side with the revolutionaries during the French Revolution. It was very anti-monarchy, and during the period called The Terror, between 1793 and 94, over 1,200 people were put in prison and over 8,000 were executed, in the name of Revolution!!

During the rest of the 19th century Nantes was a quiet commercial port, still importing sugar, textiles, and doing a lot of shipbuilding. The capital of Brittany had moved to Rennes, further north, so Nantes relied on its commerce to make a place in history. It was in the late 1800’s that the biscuit-cracker factory LU opened in Nantes, and it is still going strong.

The last dramatic episode in the history of Nantes took place during W.W.II. Being a major port on the Atlantic, Nantes, like Bordeaux, was quickly occupied by the German army in June of 1940. The same spirit of rebellion that had existed during the Revolution led to many active groups of Resistants. Exactions were almost commonplace in Nantes and there was a lot of repression.

In October of 1941, three young Resistants from Paris were sent to Nantes to carry out whatever assassination of higher German officers they could. (They had already done the same in Paris and were actively being searched for by the Germans) After a couple of weeks in hiding in Nantes they walked out one day and came across two German officers walking near the cathedral. One of the Germans was killed pointblank, and the other was injured but had the time to see the faces of a couple of the men.

They didn’t know it at the time, but they had assassinated the Field Commander, the highest German officer stationed in Nantes!! Besides the intense search for the three men, the German high command immediately took 50 people hostage, and told the population that if the three assassins were not turned over to them in a couple of days, all 50 of the hostages would be executed.

And that is what happened. No one knew who the three young men were (17,18, and 23 years old) and so, in retribution, all of the hostages were killed. Eventually two of the three men were found and executed, the third lived to tell the story.

End of 20th century and Now

Today Nantes is a thriving commercial and university city. The big university was begun in 1962 and has developed enormously. The shipbuilding is now in St Nazaire, the sister city on the other side of the Loire. But all of the major import-export trade still goes out of Nantes.

It has a well-developed public transportation system (first electric tramway) and has experienced enormous growth in the last 30 years due to its climate, its proximity to both the ocean and Paris, and for its reputation as a culturally active city.

From Nantes you can explore the cities further south on the Atlantic coast, or you can embark on a Brittany adventure, heading northwest. But first start with a lovely visit to this city rich in art and history.