Our goal for this trip was to combine several of our travel loves into one trip – French Gothic cathedrals, Christmas markets, and exploring new areas of Europe.  The trip consisted of myself, my mother and step-father.  After having driven in France previously we decided that was the best way to allow us to move around to all of the towns we wanted to visit.  I did listen to the driving in France episode to refresh myself on what to expect, as well as the episodes with Elyse on Lille and Reims.  Driving ended up being a good decision as the major transportation strike hit in the later part of our trip.

i.            Day 1 (Sunday) – Arrival, Beauvais and parking in Amiens: After arriving at CDG in the morning, we picked up our rental car directly at the airport and started our drive towards Amiens.  The drive is approximately 1.5 hours, though for a short break to stretch our legs we stopped in Beauvais with the intention of exploring the cathedral.  The town felt practically deserted and the cathedral appeared to be locked up.  We tried several doors but not all – which ended up being a mistake.  Its extremely impressive in size being the tallest vaulted Gothic cathedral though there appears to be some competition with Amiens who claims the tallest vaulted “completed” cathedral.  Most restaurants also appeared to be closed for the day right near the cathedral.  So after a brief walk around the exterior we decided to continue on our way, though as we drove past the cathedral we noticed an open door – so try them all.

When we arrived in Amiens, our hotel did not have any dedicated guest parking, which is normal, though they said you can typically find free street parking, though only some streets are free.  We never did succeed with that.  Instead I ended up driving around town for over an hour trying to find street parking, or a parking garage.  Being a weekend during the markets, parking was limited.  Ahead of our trip I had used Google Maps to find parking lots and garages for each of our cities and flagged them, but unfortunately several ended up being closed or full.  The hotel owner ended up being able to help us find a parking location which was reasonable and only a 5 minute walk.  We used the rest of the day to relax and settle into our hotel.

ii.            Day 2 (Monday) – Road trip to St. Valery-sur-Somme, Etaples Military Cemetary & Arras: Initially we had planned to drive towards the coast and explore markets in Calais, Dunkirk, Boulogne-sur-Mer, and Le Touquet but prior to our trip found that they would not be open during our dates in Amiens.  But we still wanted to explore the area.  We headed out for St-Valery-sur-Somme which is a cute, medieval town on the bay where the Somme meets the sea.  We have read this is very popular during summery, but in winter is deserted.  We were able to walk the streets and boardwalk with only a handful of other people.  We could definitely tell it was a place we would like to explore when things are open, but we really enjoyed our peaceful walk around town and even found an open bakery with wonderful chocolate eclairs.  We continued up the coast using the departmental roads rather than the major highways.  This slowed us down but also allowed us to find hidden gems such as the military cemetary at Etaples.  This is the resting place of over 11,000 British commonwealth soldiers from WW1 and a couple hundred from WW2. It was quite moving to see all of the white headstones.  With the slow driving, it was getting late in the afternoon and we decided to head back to Amiens, but made a final stop to explore the Christmas market in Arras.  This is one that was mentioned in all of our pre-trip research and our hotel host also recommended it, and it did not disappoint.  The architecture of the town leans towards more Flemish and the market was held in the central Grand Place, where there was an underground car park.  It’s a small market of only about 50 booths plus some rides, but it was uncrowded and there was a good selection of handmade, not mass market items.  Restaurants in town were limited being a Monday, so we just took advantage of the market and ate there – sandwiches, burgers, chicken fingers, hot wine, hot chocolate.

iii.            Day 3 (Tuesday) – Exploring Amiens: For our final day in Amiens, we explored the city.  Similar to other cities, we did find that areas that are typically filled with tourists were closed up for the winter, including the St. Leu District which is a neighborhood of colorful buildings that have been renovated.  They were the mills and former homes of weavers, dyers.  The main attraction in the city is the cathedral, which is a Gothic style cathedral.  There are tours of the treasury and towers at set times, but we did not take either of these.  At night during the summer and also during the Christmas markets, there is a light show on the façade of the cathedral.  The winter shows are at 7:00 pm daily.  Being a weekday, there was not an extremely large crowd.  Absolutely beautiful and definitely not to be missed.

The Christmas market in Amiens is a good size, but is very spread out.  A lot of the booths appeared to be more mass market products.  My favorite finds in Amiens were food booths with raclette and ham sandwiches and hot poire (pear) drinks.  Also make sure to try the local specialty of macaron d’Amiens.

Rooms were a good size and comfortable.  There is no elevator which was something I found in all but big chain hotels.

C.       Restaurants – Via Pizza which was very quick and efficient, La Croustille café which had a large selection of different hot chocolates and desserts and pastries for a quick snack

D.      Shopping – Jean Trogneux, a chocolatier which specializes in the local specialty of macaron d’Amiens made from apple and almond.  This treat resembles a coconut macaroon.  The company is owned by the family of France’s First Lady Brigitte Macron.

We decided to walk through some of the old town area to see the Flemish architecture, the Opera and the Bourse.  The architecture is unique and the buildings colorful.   We only stayed one night as we were heading further north but this could also be a day trip from Amiens or base here in Lille and do day trips to the coast, Amiens and up to Belgium.

Bier Central (Ghent) has a menu of almost every beer made in Belgium. The wait staff was friendly and helpful. We tried the local Flemish stew made with beer.

Shazanna (Ghent) is an Italian restaurant in the more residential side of the city.  We were placed in a back room and didn’t get much attention from the server.

·     Keep drives in shorter stretches so that you can explore along the way and not be stuck trying to just get to your destination.  Other than one transit day with a drive of 3 hours, all others were 1-1.5 hours.

·     Remember in winter the daylight hours are limited for driving.  The sun goes down around 4:30 pm.

·     These are smaller towns so they typically have a single market for the town, unlike some of the larger towns in Germany and Austria 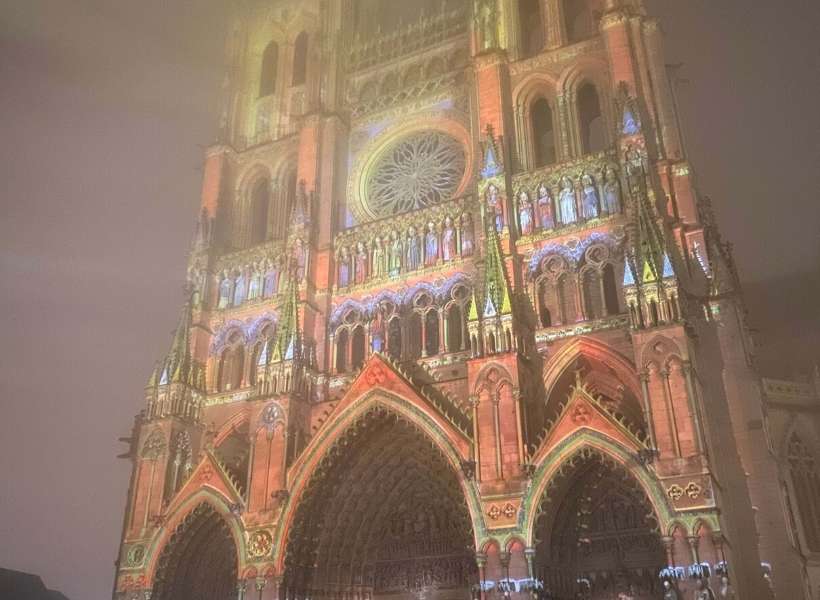