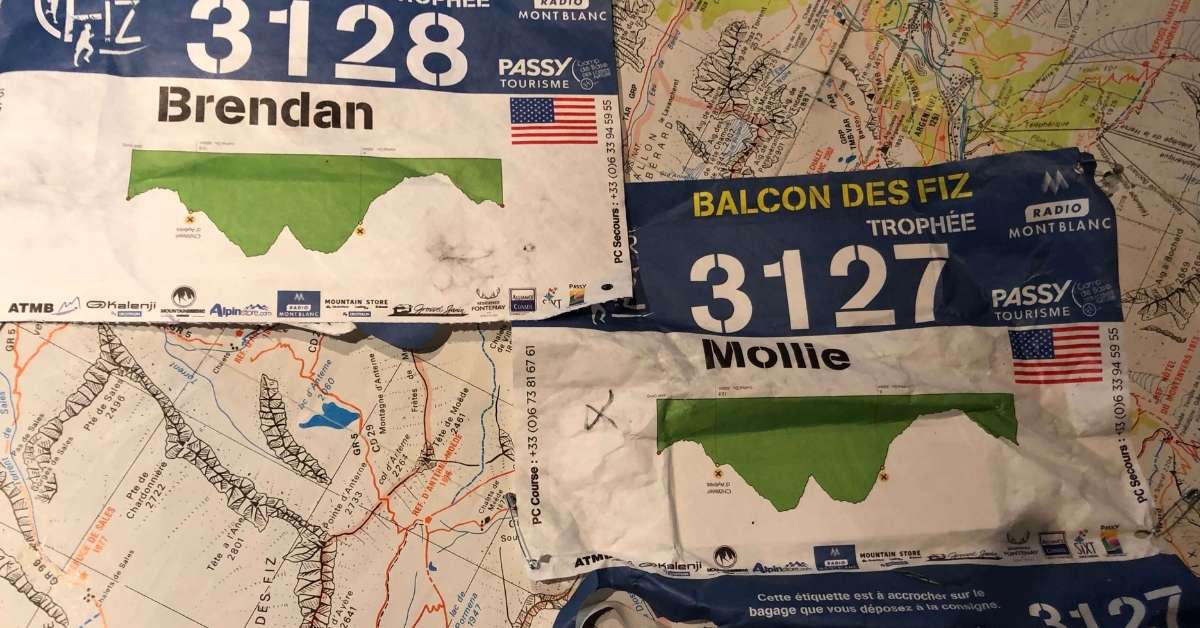 Categories: Active Vacations in France, Off the Beaten Track in France

This episode of the podcast is a trip report about running a trail race in the Alps with lots of details about how trail races go in France. We also talk about learning French as an adult and how to put together a great family vacation in France.

My guest is Mollie Cummins from the beautiful alpine city of Park City, UT. She's used to running trail races at altitude, and yet the Trail du Tour des Fiz in the French Alps was definitely a challenge. Let's talk about what made it so. Hint: the weather had something to do with it!

Mollie’s Trail Race in the Alps

Mollie would love to circumnavigate around the Mont Blanc aka Tour du Mont Blanc. But that was difficult to organize with children because it takes 5 days and the kids are too young for it.

They knew they could only come to France in July, so she looked for races taking place in the Alps in July and found the Trail du Tour des Fiz that starts in a ski resort called Passy. It's in an area just north west of Chamonix.

The race itself is at very high altitude. You shuttle to the start of the race from a large store and parking area (Mountain Store Decathlon).

There Are Multiple Distances Offered

There are multiple distances you can enter. There is a lot of vertical gain, more than what runners in the US are used to, it's very steep.  But if you're not up to a long steep race, they also offer a kid's race, a 15K (9 miles) up to 84K (50 miles) which is the full tour plus other races in between.

Those Races Fill Up Fast!

Mollie normally runs ultra races, she intended to run one of the longer races but it was full. So, she had to go with the 15K. This is a popular event, the longer one fills up within a day or two of opening up for booking. She was on a wait list for the 8 refuge tour (39 miles or 64K), but she didn't manage to get in, possibly due to a computer problem.

But there was still space in the Balcon des Fiz race, a 15K. Her husband decided to join her for that race as well. It's nice because it doesn't take up the whole day. It's still very steep, you run up the ski slopes and go the various chalets. It's lovely, for instance you get to see the cows with the bells around their necks.

Bad luck, it was a muddy and rainy day. Mollie doesn't mind running in the rain and playing in the mud, but she didn't get to see the scenic landscape because it was overcast that day. Mollie and her husband Brendan were the only two Americans in the race. It is uncommon for Americans to sign up for this race so they fussed over them when they crossed the finish line, which was lovely.

When you finish the race they give you a special beer for racers and there's a meal catered by a local restaurant called La Poêle Géante that was the best post-race meal she ever had. It was cheap too around 10€.

In France you need medical clearance to enter a race. They take this very seriously. If you don't submit the medical paperwork you will not run. Mollie found the form here.

Some of these races also have mandatory lists of gear. In this particular race they had a list of gear but they didn't get checked. But in the longer races they do get checked and if they don't have the gear that will keep them safe they are booted out of the race.

Rating the Organization of the Race

The race is really well organized, well-marked. There are a good number of people ready to jump in just in case runners experience difficulties. But this is a long race, anyone who stops running for any reason needs to get dry clothes and stay warm.

Runners should not abdicate their own responsibility when it comes to running this trail race safely. They shouldn't rely only on markings. They need to look at maps  and get familiar with the turns and terrain. They must have proper equipment.

In the shorter race there were points where you could get water, drinks to replenish electrolytes, fruits, small cakes (gâteaux). For longer races they probably provided hot drinks and hot food. This was similar to what you normally get in an American race.

Mollie recommends English-speaking runners sign up for races in France for the following reasons:

Learning French as an Adult

Mollie's daughter is in a French dual immersion program at school. But it seemed strange that the only person who could speak French in the family was only 8 years old who is in the 4th grade.

So, Mollie decided to learn French too and she started listening to the Michel Thomas French language learning series while she runs in the morning. Learning was really enjoyable and she kept it up. She also hired an on-line tutor.

She learned enough French that the people she talked to in French in France did NOT switch to English. That was encouraging and she has continued with her lessons through the University of Utah where she works as well. All the Alliance Française classes in the US have switched to Zoom lessons and you can take classes from all over the country now.

There are so many resources to learn languages now! You can read French newspapers from anywhere in the world and if you get stuck you copy and paste into Google Translate.

They hired a private guide who came along with them in their car and was fantastic. His name was Christophe Rault. Mollie and her husband read Steven Ambrose's D-Day so they were familiar with the events, but the guide brought so much more to it!

They were staying at a small farm and the guide met them early in the morning and stayed with them all day.  This allowed them to accommodate the kid's needs. The children were tired after 9 hours of touring Normandy, so they dropped off the kids at the farm and the adults kept going with the guide. The farm was called Englesqueville-la-Percée – Ferme de la Rouge Fosse.

Canicule in the Loire Valley

The day they were in the Loire Valley was really HOT and they were staying in the 3rd floor attic of an old house. They went looking for a swimming spot and they found one called "Baignade Naturelle" it was a wonderful cold spring fed pool. They couldn't let them in the pool with board shorts, so the boys swam in their underwear.

Pools in France mandate tight-fitting swimwear. At the beach nobody cares, but public swimming pools do care. This is definitely a French idiosyncrasy: no board shorts or baggy shorts in French public pools.

The Mont-Saint-Michel is mobbed during the day and it is not a pleasant experience. They arrived late in the day, toured the monastery right before it closed. They spent the night on the Mont and left in the morning. They expected that the food wouldn't be the best of the trip. Mollie realized starting at 2 in the morning why this is so. People have to haul hand-trucks full of food and drink up the mountain for thousands of visitors each day. It's great to experience walking around the ramparts for the kids.

Annie recommends people do not sleep on the Mont because it's difficult to haul a suitcase up there. But for Mollie and her family that was not going to be a problem. It's also mobbed and noisy. There's a bus that will take you to hotels off the Mont until midnight.

They walked on the sand in the evening and enjoyed it. They found a fairly hard surface.

The kids loved the Musée de l'Armée and it's walking distance to the Eiffel Tower and it's good to combine the two. The collection of armor is amazing there! Ask for the treasure hunt for the kids, it's fun! The WW2 exhibit is wonderful too. As is Napoleon's Tomb.

Categories: Active Vacations in France, Off the Beaten Track in France