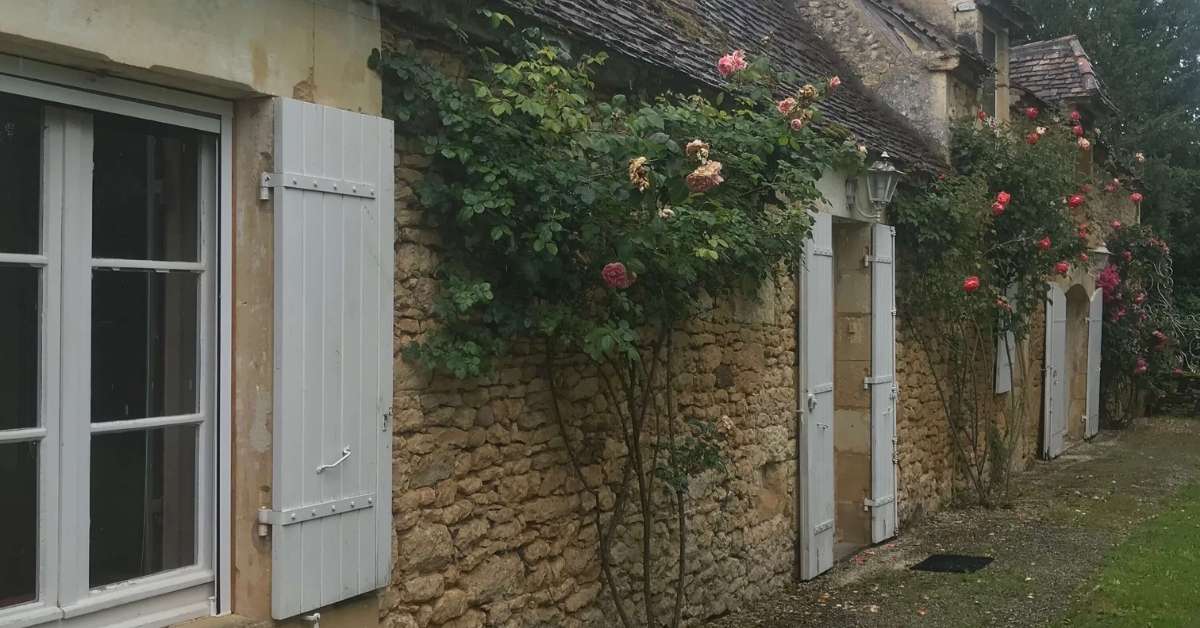 This episode of the podcast is a conversation with Wendy Sherwood on house-hunting in France. Wendy is looking to retire in France which is a dream for a lot of people. It’s achievable, she explains how they are going about it. Wendy keeps a blog called Are We In France Yet and I recommend you take a look, lots of inspiration for places to visit in France if you need your list to get any longer!

2021 is finally here! Not that rolling over a new digit will necessarily change everything, but it’s a step forward and I’m happy that it’s finally here. So, Bonne Année to all of you, wishing you health, joy with your family and friends, professional success, and the ability to visit France soon. Will travel for pleasure resume in 2021? I am sure some of it will. How much? I can’t say for sure right now.

Wendy and her husband decided to look for a house they could buy for their retirement. They're not ready to retire yet, but they've decided they would like to live in France and are exploring ways to make that happen.

Wendy has lived in France in the past, she speaks French and loves France. Her husband was in the wine business and would love to live in France. They have friends whose parents are in Toulouse and they are helping them locate a property.

They spent 10 weeks in France doing on the ground reconnaissance but they haven't decided where they want to settle yet. They are considering buying a property they could rent as a gite or possibly use the space to do cooking classes or some such service. If they don't develop a business they will have more leeway as to where they settle.

10 Weeks of House Hunting in France

They landed in Bordeaux and leased a car through Renault and Euro Drive. This gave them plenty of time to see several regions and be really mobile. At first they stayed with their friends around Bordeaux and the Dordogne and then moved on to AirBnB.

Their friends have a lot of local knowledge and was able to tell them all about the area they were looking into. They were able to take personal house tours arranged by their friends without involving a realtor.

They know they want an old house with old stones, some land, access to water. But not anything like renovate a chateau. They'd like a historic property (which they know might come with some issues) and possibly has a barn they can renovate into a B&B or gite.

Making the Purchase Contingent on What You Need

It's important to make sure whatever property the buyer chooses is zoned right for that sort of development because in France zoning is only reviewed every decade or so. If it's not zoned right it may be get the right zoning in your lifetime.

In the purchase contract you can put a condition that says I will only buy if it turns out I can put in a pool or turn an agricultural building into a house. But be aware that the only people who can tell you for sure is city officials. Not realtors and definitely not sellers because they'll say anything to make the sale.

Find an Agent who Speaks English

Finding an agent who speaks English is good, but knowing French yourself is a lot better. Annie guesses that a buyer who doesn't understand the fine print will be taken for a lot of rides.

If you're looking into areas where it's touristy most real-estate agents will look at you like a walking checkbook. They figure the rich Americans have shown up, let's sell them something even if it's not really what they wanted.

Work with a British Agent

If you're not 100% comfortable with French, look for an agent who is English or speaks great English. They will often be more understanding of your point of view as a buyer. There are a lot of them in the Dordogne, Provence, Normandy.

Putting an Offer on a House

If you're house hunting in France, eventually you'll make an offer. That's exactly what happened to Wendy and her husband. They fell in love with a property that checked all their boxes and put an offer on it. They made the offer, negotiated it, the sellers accepted it. The sellers were adamant that they should sign the "compromis de vente" right away. That's the document that commits you and if you break that commitment you lose your deposit.

Getting the House Inspected

Finding an independent building inspector might be difficult. In France it's still very much about who you know. People get their uncle who is a builder to come look at the house.

The "bilan énergétique" is mandatory. But you're on your own when it comes to floods and other risks. In the Dordogne you can find building inspectors (because there are so many English-speaking buyers) and that's what they did.

Their inspector wrote a 30 page report and met with them and explained that the biggest problem was with humidity in the walls. This is a common problem with houses built in that era. There are ways to mitigate these issues but it can be very expensive.

Who Will Manage the Renovations?

One big question folks who want to retire in France must answer is who will take care of renovations on the house. Can that person speak French? Is that person willing to handle these things? This can become a full-time job at least temporarily.

Is this Area Still French?

There are areas of France (in the Dordogne and in Provence notably) where all the houses have been purchased by foreign buyers. That means that all the French people have moved somewhere else. Are you really living in France when you're surrounded by non-French people?

Keep in mind that British families who own a modest home in London are in a position to sell that modest home for the price of a beautiful place in the Dordogne. Annie met a couple like that who came to house-sit for her. They sold their tiny house near London and bought a big beautiful place with a gite in the Dordogne. They didn't have enough income to live in the Dordogne so in the touristy season they rented out their house and went around house-sitting. This may end with Brexit, but it was common up until now.

Will You Start a Hospitality Business in France?

This is another big question for folks who want to "retire in France". A lot of them don't really want to retire fully. They want to have a side business that often turns out to be a rental business or other hospitality business. The issue is can they qualify for a work permit? Rules change all the time but Wendy explains what she looked into at around minute 29 of our conversation.

Lessons Learned from the Pandemic

Because of the pandemic Wendy realized that it's possible for a hospitality business to stop bringing income. Travel restrictions have been a reality for most of 2020 and continue to be a reality in early 2021. The question is can you move to France if that means not being able to go home to see your aging parents?

If you're not going to be able to rely on a hospitality business to justify buying an expensive property in a touristy area, maybe you can look at cheaper French regions. Brittany comes to mind. The weather is not as pleasant, but it's beautiful.

Wendy being from a hot dry climate in California and she's not sure she wants to be in a place that has heat waves again. But most of France has heat waves occasionally.

WiFi is another consideration. Some places have great connections and others are bad even if technically they have WiFi. Most French people don't care if the WiFi is lousy. We have 4G (soon to be 5G) with our local data plan so we can do a hot-spot for better internet access.

Changes Due to Covid and Brexit

The economic depression due to Covid-19 has motivated the French government to create incentives for French people to renovate their homes. These incentives are available for primary as well as secondary residences. It is likely that home owners in France will take advantage of these grants to improve heating systems. Will they install AC? Some never will, even if it's cheap because there is a bias in France against cooling.

Because of Brexit it will become harder for English people to buy up properties in France. That will make home sellers more willing to negotiate. Some properties will stay on the market for years because it was inherited by siblings who can't agree on a sales price. Usually these are people who are not hurting for cash anyway.

With the pandemic lots of people in Paris are realizing that they might prefer to live somewhere more rural, have a garden and not be so close to other people. Apartment prices being what they are in Paris, they can sell at a high price and buy a bigger place somewhere else in France. It's very much a seller's market in France right now and for the foreseeable future.

The Sellers Who Are Most Likely to Negotiate

The people who are most likely to sell as quickly as possible in France are people who are getting a divorce. They need to split the equity between them and usually neither one has the cash necessary to buy the other one out. They are the ones who will negotiate.

Folks who inherited a house are often willing to sit on the property for years and won't lower their price.

The Smart Way to Find a House in France

Rent for a few months at minimum and talk to everybody. The little old ladies and the dog walkers are a great source of information! They know things nobody else will tell you.

Live there for a year in a rental, get to know the folks who are on the city council. They'll know if a new development is coming or if something that was planned has is not going to happen. This also helps you becoming part of a community. French people are very willing to help once you have a relationship with them.

Find Your Own Notaire

Have a meeting with a Notaire. They are a real estate lawyer as well as a deed company and they collect taxes. In France you pay a big chuck of tax when you buy. Later on you'll pay Taxe Foncière and Taxe d'Habitation, but those are not big amount.

If you're house hunting in France, you should lookup the price houses have actually sold in France. Just be aware that the data is often a year behind. It's also smart to have your own notaire and not use the same one as the seller.

French people don't refinance their mortgage because they would pay high taxes again. So, this is not done here.

No Zillow or MLS in France

One of the difficulties of buying a house in France is the difficulty of determining the right price. Lots of houses are listed by different realtors at different prices. You cannot hire a buyer's agent. Once you've signed a visitation paper you're stuck with that realtor.

Official site that lists the price of properties sold in France since Feb 2014.

How about you? Have you gone house hunting in France? Share your thoughts on the show's Facebook group.