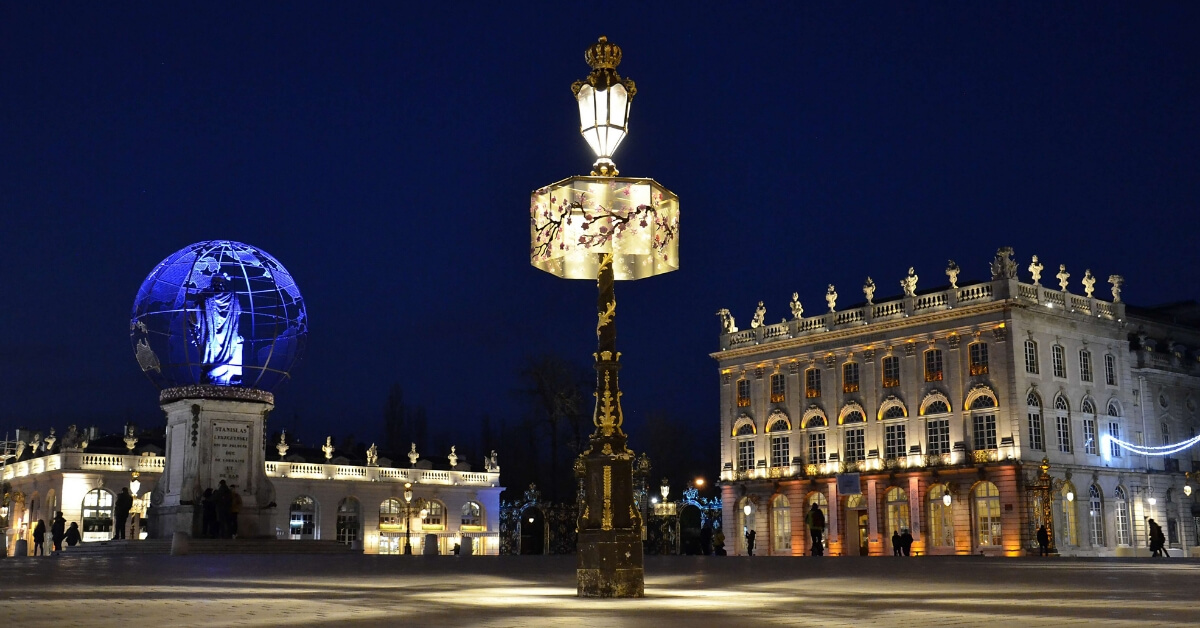 Categories: Alsace and Lorraine, Day-Trips from Paris, Off the Beaten Track in France

Elyse Rivin who is my guest on this episode is a professional tour guide and used to live in the Grand Est area. She has lots to say about the gems this area offers!

A Visit to the City of Nancy

Nancy is in the region we call the Grand Est today, but historically belongs in the Lorraine, in the Department of the Meurthe-et-Moselle. It's the 20th city in France with 100,000 inhabitants and 400,000 in the metro area.

It's a big center of culture, has an opera house and a vibrant university system. The weather is not great generally, unless you like cold and humid. It's very green without any sprinklers! Nancy is viewed in a very positive light in France and part of the city center is a Unesco World Heritage site.

Nancy is a 90 minute ride from Paris on Paris-Strasbourg TGV train line. You could visit Nancy as a day-trip from Paris. My guest Kim from Australia talked about her day-trip to Nancy from Paris in Episode 106.

Nancy has always been the capital of the Duchy of Lorraine. Lorraine is a fairly big area. The name comes from the time of Charlemagne and his great-grand-son Lothaire.

This was a separate Kingdom from the King of France and was essentially Germanic. Everybody speaks French in Nancy now, but you'll see Germanic influences there still to this day.

Different groups took over the area over time, it's outside of the scope of this podcast to go over all of that because it's terribly complicated. It was an area that was fought over a lot over many years.

At some point a relative of the King of Poland is put in charge of the Duchy of Nancy in the 1700s and that was Stanislas. He is the one who helped Nancy move out of the Middle Ages and into a more refined and cultured time.

Stanislas was more interested in science and culture than in politics and war, which helped the area grow immensely.

Stanislas' daughter married Louis XV, which raised the profile of the city of  Nancy. That's how Lorraine became attached to the Kingdom of France in the middle of the 1700s.

Stanislas had some gorgeous plazas built in Nancy, one of them named after him.  Some of the area had to be rebuilt since due to damage from the French Revolution. The renovations were done so well that it's hard to tell what's from the 1800s and what's from the 1900s.

In France in general workers weren't allowed to join a craft without paying dues, joining a guild, or going through a particular school. But in Nancy all of that was liberalized and it brought a lot of talent and prosperity to the city.

During the war of 1771 the Prussians invaded France. Thousands of people in the Alsace fled west to Lorraine as a result. In 1914 the same thing happened. People were given a choice to stay French or become German. There was always a flux of people going back and forth.

This part of France is coal-rich. In the 19th century coal mines were developed, followed by steel factories. A university also developed at that time, including a school of medicine and pharmacy. By now the coal and steel industry is gone, but the universities are still there.

The Germans occupied Nancy on their way to Paris. A lot of people fled the area as a result, including Jews who resided there. Many young men were taken prisoner to do forced labor for the Germans.

The intellectuals and university professors put up as much resistance against the Germans as they could. The University of Nancy as a block is the only University in France to receive the Legion of Honor for bravery during WWII.

The police force in Nancy also resisted the Germans and refused to help them. Most police departments in France complied to what they Germans asked them to do, even if it meant arresting Jews.

Art Nouveau was a crafts movement as opposed to a fine art movement. It made sense in Nancy because in the 1890s they still had glass and metal industries in the area. The idea was to make more prestigious the crafts and the arts connected to industry.

This is far from a school of painting and sculpture. This was a school where you could learn how to make fine furniture, blown glass, textiles, metalwork, even architecture. Beautiful objects we use in everyday life.

The Esthetics of Curves

The movement is based on the esthetics of vegetation and curved lines. People were tired of the classical rigid architecture where it's all grand straight lines.

They were looking for something new and crafts people going back to nature that found the new art. In Art Nouveau everything has curves. The windows in the houses of the Art Nouveau movement are particularly notable.

Unique Pieces that Can Be Reproduced by Industry

The idea was to produce unique pieces that could then be reproduced by industry. The social context was such that they wanted to make beautiful objects more affordable for more people.

He was the first president of the École de Nancy starting in 1901. He was also a factory owner where they made blown glass, furniture and other beautiful objects for every day life.

Second president of the École de Nancy, he was a painter, sculptor and engraver. You can see some of his Art Nouveau furniture at the Orsay Museum in Paris.

He was the architect who made many of the Art Nouveau houses you can still see in Nancy.

Art Nouveau constructions have beautiful curved windows, curved doors and curved wrought iron. Here a few of the best examples you can see in Nancy. The Nancy Toursim Board also has a page in English that lists many.

You can see two great examples of Art Nouveau houses at 5 rue des Brices and 1 boulevared Georges Clémenceau. You'll also see lots of competing Art Déco that dates from after the war.

This is not wine country, but there's wine not too far.

Was developed for Stanislas. In France quiche is a not any savory tart, it's specifically eggs, cream, cheese and bacon. Other kinds of savory tarts are not called Quiche but "tarte salée".

Proust made it famous. It's a small cake with a bump in the middle.

It's a puff pastry cup filled with a veal and cream sauce. Annie's mother made it with beef, cream, mushrooms and and green olives. You can also make it with "Quenelles de Lyon".

Tiny little plums that grow there and taste really good. You can also make tarts out of it. 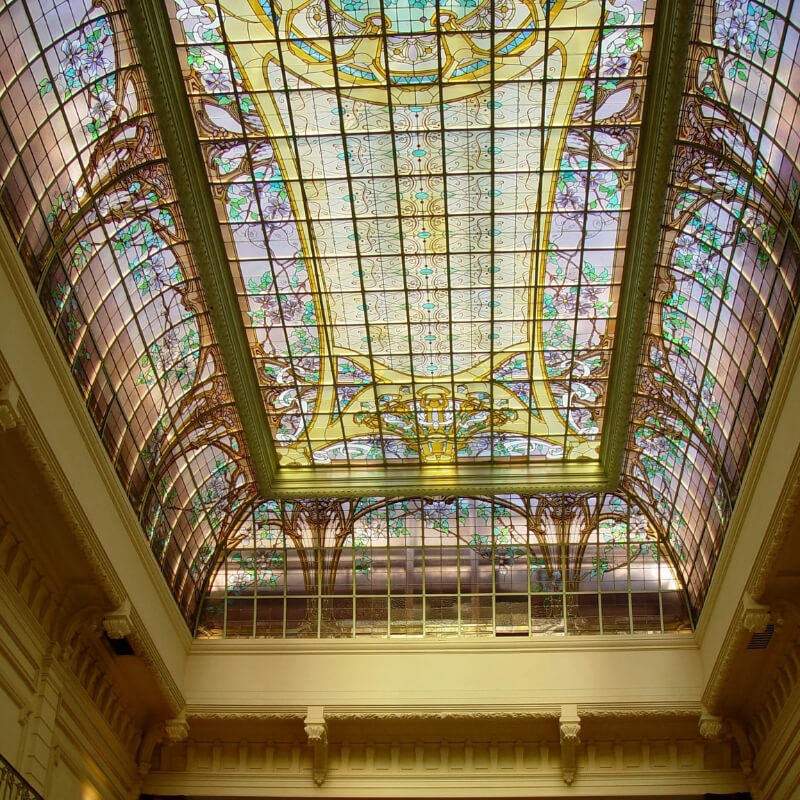 The area is gorgeous, once you get outside of Nancy you get into lovely forest where there are great hikes and mushroom. The weather isn't great there, you might want to go in the summer if you like pleasant temperatures. We recommend it as a day-trip from Paris, or possibly a one-night stay.

Nancy is worth a stop whether you do it from Strasbourg or from Paris. Or you could do several days with a stop in Reims, Nancy and Strasbourg, but that would be at least 3 nights.

Categories: Alsace and Lorraine, Day-Trips from Paris, Off the Beaten Track in France