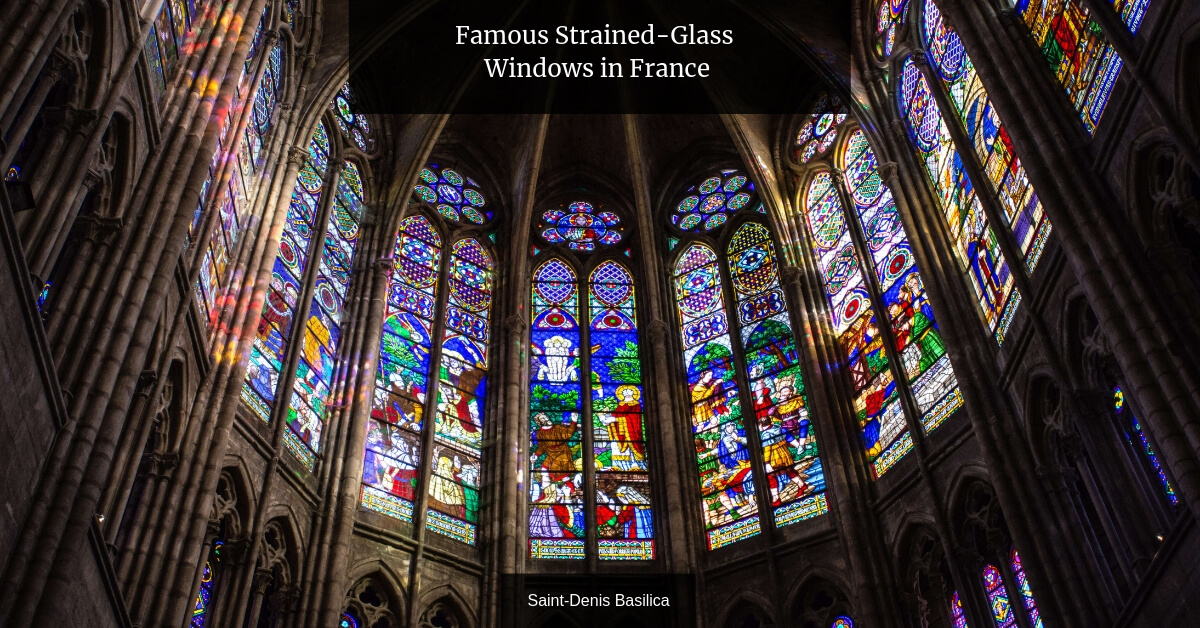 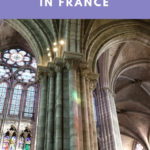 Go See the Stained-Glass at the Cluny Museum!

The only place we know about where you can put your nose up to the stained-glass is the Cluny Museum in Paris, one of the reasons why we love it so much. The room with the stained-glass is not very large, but it is stunning to see it up close instead of high up in the church.

Glass with a Stain Over It or Colored Glass?

The name “stained-glass” in English is ambiguous. It could mean colored glass (where the color is actually in the glass) or glass with a stain painted on it on top of the clear glass. You will find either one in stained-glass windows.
In French we say “vitrail” or vitraux” in the plural. This specifically means a window made of either colored glass or stained glass. In French it’s about the window, not about the glass used to make it.

Why Stained-Glass Is So Important

Despite WW1 and WW2 a lot of Cathedrals in France still have the original stained-glass. Which is amazing in itself.

A Brief History of Stained-Glass

Stained-Glass Was Inspired by Mosaics

The Romans loved technology and used pieces of glass to use in mosaics either on the floor or in the walls. The earliest Christian stained-glass windows were inspired by these colorful mosaics the Romans made. But instead of adorning a wall with the glass they wanted to make it into a window.

Romans tried to hold pieces of colored glass together in a window using wood. That didn’t hold up very well over time. One of the oldest pieces of glass we have is in Italy in the town of Ravenna where a church has some glass windows from the 400s.

Most Houses Didn’t Have Glass Windows

Most houses didn’t have windows in Roman times, only the very rich could afford some small colored glass window. Otherwise, even in churches, the windows were often closed with wooden shutters on the inside and they were covered with skin that was made into translucid parchment. The parchment was sometimes painted to give it a pretty look.

But there were no windows as we know them because glass was too rare a commodity to be used that way. Until the 5th century AD when artists started to use glass to make small objects with color and used some in churches. But the pieces of glass were always small, so maybe they made bull’s eyes of small dimensions. Then they used pieces of glass to decorate reliquary boxes.

Once people figured out how to use lead piping to hold the glass it changed everything. This happened in France and that’s when they started making bigger windows. Still with small pieces of glass, but with lead they could cover more area.

By the end of the 800s in Pre-Gothic churches they started making bigger opening with colored glass and they developed new techniques. A lot of the formulas they used have been lost. Same with Roman mortar, we don’t know how they made it exactly.

New Artistic Techniques Were Developed for the Church

All of the innovations were going on in relationship with churches. They developed frescos techniques and glass-making techniques for the churches. Statuary as well! Starting in the 900s they started making really big and tall churches, not Gothic yet, but more glass and taller churches started to appear.

They had to invent flying buttresses to hold those tall walls up, which is what happened in Beauvais twice! But at the same time there is a push to make bigger and bigger churches with bigger windows.

The Contributions of Abbé Suger

This is when Abbé Suger came into the picture. He was the at the Monastery of Saint Denis and he was the King’s Priest and Theologian. He wrote tracts of theology. He wrote about the Divine Light of God as seen through color. He had a lot of money at his disposal because of his connections and instructed his builders to go high with many openings and lots of stained-glass windows.

Abbé Suger believed that light that goes through glass becomes Divine Light once it enters into a church. The Divine Light is seen through color. You can really see this at Saint Denis even today, but it depends on the season and whether or not it’s sunny that day.

What we know as Gothic is based on this doctrine that looking at light filtered through color coming into a church tells you about Divine Light. They wanted people to look up at the Divine Light high up on the walls of the Cathedral.

Chartres Has a Lot of the Oldest Stained-Glass in France

Chartres had a Romanesque Cathedral, but based on the doctrine of Abbé Suger they rebuilt it as a Gothic Cathedral. This is the church that has the most original glass from the early 1100s. In WW1 and WW2 they took the glass out and saved it from destruction. They did this because they knew the Germans weren’t beyond bombing a church since they had bombed the Reims Cathedral causing terrible damage.

Chartres is also very famous for the blue of Chartres. It is a wonderful saturated blue. 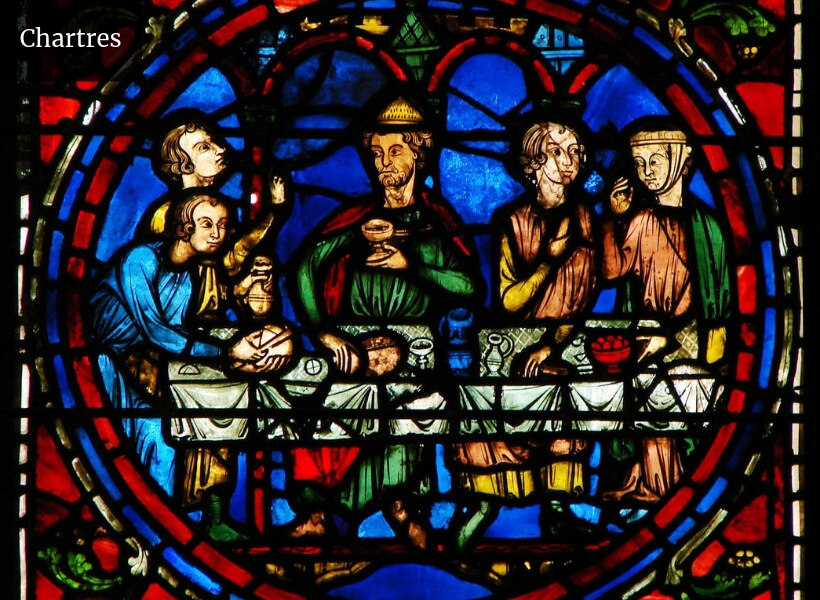 This Cathedral is also famous for having old stained-glass windows.

It is difficult to tell what Bible story is told sometimes because we’ve lost the knowledge of the symbols. The person holding the key is usually Saint Peter, but there can be details that indicate otherwise and we’re not well informed about these things today.

The tallest Gothic Cathedrals are 41 meters high. The wanted to have as much as possible in window surface and as little wall as possible.

Metz is a city that has a lovely cathedral. But most people don’t talk about it, but it is the Cathedral in all of Europe that has the most square footage of stained-glass. It is called The Lantern of God. When you’re going to Strasbourg, it is worth stopping in Metz to see the Cathedral and the Museum. It is one of the first Cathedrals to have a large Rose Window. This is also an invention of the French.

Stained-Glass Not Miss in Paris

Really beautiful and worth seeing. The area right around the Basilica is fine, but the walk between the RER and the Basilica is a bit of a rough neighborhood. You may want to take an Uber. Taking a guided visit inside of Saint Denis is totally worth it. Annie took the photo at the top of this page is Saint-Denis Basilica.

This is not a Cathedral but a church. It was the private church of French Kings. It was commissioned by Saint Louis to hold the Crown of Thorns. It was built by the workers who built Chartres and it is mostly glass and amazing.

Stained Glass Not to Miss Outside of Paris

Chartres, Reims, Amiens, Lille, Bourges, Le Mans, Carcassonne is the only one south of the Loire River.

Why do we not have so many Gothic Cathedrals in the south of France?

Because Romanesque was popular for longer in the south and Occitanie didn’t become French until the 1300s.

By now they know how to make large pieces of glass and they use both glass colored in the making of the glass and painted glass especially with yellow stains. They would put architectural features in the background. A large King or Queen, something that looks like Jerusalem, and the folds of the clothes are often painted on.

The stained-glass that has the most saturated colors is often the oldest. As the figures get bigger and the themes are more architectural, we’re getting into the Renaissance. 1600s and 1700s is when we entered the Baroque period and there is hardly and stained-glass at all. Baroque style is round cupolas in the church with openings for natural light. Not painted glass any more. In the 19th century there is a resurgence of interest in stained-glass windows.

In Toulouse there was a stained-glass maker called Gesta who refurbished or made new stained-glass windows. You get purples and colors that they didn’t use in the Middle Ages. This coincides with an interest in Neo-Gothic architecture. There is some really nice 19th century stained glass in France.
20th century art doesn’t work well with stained-glass. Cahors has strange stained-glass from the 20th century, so does Conques in the south. At Sainte-

Mère-Église you can see a 20th century inside of the church that pays tribute to the soldier that got caught in the steeple of the church.

It’s easier to look at stained-glass windows for a long time than on statues for example. Abbé Suger was on to something because color seems to talk to our soul, even for people who weren’t raised in a Catholic faith tradition. Light and color are magical. When we go outside at the golden hour you get beautiful light and everybody notices that. We may not notice changes in the wind, but we will notice changes in the light. It makes things feel alive. Suger said that being inside of a Cathedral is like being in Heaven.