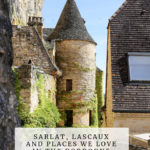 Your Visit to Sarlat, Lascaux II, Beynac, and Les Eyzies

This is the area we’re talking about in this episode. You can stay in Sarlat and visit them all within two or three days, depending if you can stand to rush it or not. Castelnaud, Beynac and Lascaux are not to be missed for families with children.

SARLAT – A Lovely  Renaissance Town in the Dordogne area

Sarlat is a small town of about 10 000 people, in the department called the Dordogne in the eastern part of the ancient region of Aquitaine. It is the center of an area designated since the Middle Ages as the Périgord Noir.
The name, Périgord comes from the name of the ancient tribe, the Gaul tribe of the Pétrocores. The name eventually evolved into Périgord. The forests there are so dense, and made up of live-oak and walnut trees, so that from a distance the hills look black (noir). The territory is in the southeast part of the region called the Dordogne, named after the major river that flows through it. It is a region of rolling hills, small rivers, and some limestone plateaus which are filled with caves and outcroppings.

For the last 50 years, the area, a rural and at one time poor area, has become extremely prosperous and popular for vacationers and people who want a second home, particularly, for the English. Because it is an area filled with old historic buildings and small lovely villages, the town of Sarlat has become the economic hub of all the activity in the region.

Situated in a region northwest of Toulouse, it is about 90 away from Bordeaux on a local whistle-stop train, or about 40 away from the main train line going from Paris to Toulouse, at the stop called Souillac, where there is a bus line. For the most part, it is a town and an area best visited by car.

Sarlat itself is a famous town for the beauty of its architecture, mostly from the Renaissance or just before – that is from the late 1400’s, 1500’s, and early 1600’s. The entire old city center is a preserved historic area and it is very well-kept. There are beautiful buildings made of the creamy yellow limestone specific to the region – with the flat tiled roofs on a steep pitch, made in a dark red – brown color, there is an allure to the old Sarlat that has made it one of the most famous and most photographed of the magnificent Medieval towns in southern France.

Built, at first, as a monastery in the beginning of the early Middle Ages, probably in the 500’s, as a Benedictine abbey, and a major pilgrimage stop, it developed as a center of trade for the local tradespeople, and became a wealthy center of Fairs and of commerce. Between the year 1000 and the 1300’s it was famous for its prosperity and its beautiful houses as well as for the Abbey Caught in the middle of the 100 Years War between the English and the French, it was finally “liberated” from English rule in the 1450’s, it becomes a center of Humanistic thinking and Renaissance ideas. In the Middle Ages it is already a small city of between 5 and 6 000 people.
Caught up again by the war of Religions in the 1500’s, it is taken by the Protestant troops and then re-taken by the King’s troops and from then on, is a bastion of Catholicism in the area.
Known forever for the beauty of its residences and the quality of the trade, it is left mostly untouched by time.

Its modern “Renaissance” is due to the interest that outsiders develop for the Dordogne area and for the magnificent houses that attest to its rich past. Now, almost all the houses are renovated and occupied, either by local full-time residents, part-time residents, or people who rent out the apartments and houses to tourists. The most famous example of a Sarlat Renaissance structure is the Maison de la Boétie, which now houses the Tourist Office.

A Visit to Sarlat

You can spend hours walking up and down the lovely cobble stoned streets, looking at the houses, going into the courtyards,, visiting the church, and going in and out of the many shops. On Saturday, Sarlat is home to one of the most important and famous outdoor Markets in the whole of Dordogne and the Périgord. This market which covers all the main old streets from the big open square to the cathedral and beyond, is famous for its foodstuffs that are produced in Dordogne. Among the most important of the items are the black truffles (worth a fortune) the foie gras and all things made from ducks, the walnuts and walnut oil, the strawberries (there are two seasons there) and the cheeses. People come from very far away to the Saturday market for these wares. On another street, that separates the old quarter from the newer one, is a large outdoor crafts and goods market too. During the springtime and the early Fall the market is filled with crowds coming to fill their baskets and have a nice coffee or lunch in Sarlat.

Using the town of Sarlat as a base – you can easily spend two or three days visiting things in the department.

One nice day’s outing would be to go to the villages of La Roque Gagneac along the Dordogne river, explore the town and take one of the old flat-bottomed boats for a ride out on the river. It is possible then to visit two of the most impressive of Medieval Fortified castles in the southwest of France, the castles of Beynac, with its small town down below, or, on the other side of the Dordogne river, the castle of Castelnaud, which has a museum of the history of Medieval warfare and armor (great for kids).

There is also the town of Domme, a bastide surrounded by its stone portals and walls with lovely little streets and gardens.
Another full day excursion out of Sarlat is based on all the Prehistoric sites that are so important in the area. The town of Montignac, is famous for being the home of the four young men who discovered the cave of Lascaux, the most famous of all the caves with prehistoric drawings and designs. Now there is a Lascaux II available for visits, faithfully reproducing the original cave, no longer open to the public. There is also the town of Les Eyzies, home to the Prehistory Museum, and two other sites, the outcropping called Cheval Blanc, and the caves of Font de Gaume. All the caves are visitable stricly by reservation (and they all have english speaking tours twice a day in high season).

All along the Vézère river, the tributary of the Dordogne, there are lovely castles, small charming villages, and prehistoric sites to visit. This is also a gourmet area, with lots of good small restaurants, and the local products are to be had everywhere.

The town of Sarlat and the local region are wonderful for exploring, enjoying the foods and the magnificent architecture as well as the castles, forests, and caves that are all around. It is not for nothing that this is a very  popular area for tourists and it is a region that has good weather almost all year long. Starting and ending in Sarlat, and making sure to not miss the fabulous Saturday  market, you will spend time in a lovely, relatively serene area, the Perigord Noir and the Dordogne.