Categories: Montpellier Area, Off the Beaten Track in France 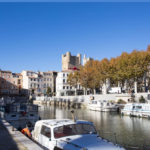 [03:00] In today’s episode, I bring you a conversation with Elyse about Narbonne, a city that doesn’t get a lot of love, yet has been at the crossroads since ancient times. If you’ve ever crossed France north to south, chances are you at least drove past Narbonne. And that’s the problem with this city: most people pass by and don’t stop. But maybe they should, as explained by Elyse on today’s episode.

[04:00] Narbonne is a place that a lot of people go through (major train station and freeway hub), but rarely stop. Other cities nearby get a lot more tourism, for instance Nîmes,  Béziers, Pézenas, or especially Carcassonne.

[06:30] We think we need to talk about Narbonne because it’s a major historical center. There are 52,000 people there today and the old city center is very interesting to visit, and of course it’s a beach town.

[07:30] Narbonne is one of the sunniest cities in France and well off the beaten track. Narbonne has not been able to turn itself into a destination but has remained a pass-through city. The beaches nearby are a destination especially for French vacationers. No mistral wind here but rather the tramontane wind.

[08:40] The population of Narbonne has been growing because a lot of retirees want more sunshine and there’s plenty of it there. Also, and this is going to sound counter-intuitive to people who don’t live in France, but people who live in Paris can’t wait to get out of Paris.

[10:40] Narbonne is a city at the crossroads, many people have heard of it, but most would be hard-pressed to tell you what’s there.

[12:12] Narbonne is the first city the Romans established in Gaul with all the commerce that goes along with that. The 10th Roman Legion was established in Narbonne, so it was also an important military city. Then in 22 BC Narbonne becomes the capital of Gaul. The port of Narbonne was the second biggest port of the Roman empire 2000 years ago.

[18:16] After the 400s, just like the rest of France, there are a number of crazy groups that come through and take over, including the Visigoths  who stayed a little longer than most. Visigoths were pushed out by the Franks who stayed.

[20:22] In the 700s, the Moors from Andalusia take over Narbonne for 40 years. When the Moors took over, they did not force people to convert to Islam, they simply taxed non-Muslims. Narbonne became a place of great intellectual and philosophical activity. The Troubadours were really important in Narbonne.

[22:48] Vikings also got to Narbonne in 859 and they pillaged the area and left. Then we get into the bulk of the Middle Ages, the age of Monasteries and Churches. There are still a few Roman ruins that you can see in the center of Narbonne (some of the Via Domitia in front of the Archbishop’s Palace for instance), but most of what you see there is left from the Middle Ages.

[24:12] You can see a piece of well-preserved Via Domitia in Narbonne.  You can see the ruts for the wheels of the wagons and the rise which makes the curb and the walkway for pedestrians. This is the way Romans made their roads everywhere. You can also see some digs where they are working on excavating some Roman ruins.

[26:12] The horrea or horreum in Narbonne. Those are underground galleries and storage, experts speculate that they were probably used as public storage. There are several buildings that still have this horreum. It was both underground storage and a way to get places under ground.

[28:00] At one point Narbonne had all the buildings you would find in a major Roman city: Forum, Coliseum, Circus, Theaters, etc. All of those are gone today. Arles has a lot of that left, Nîmes has some, cities like Toulouse and Paris have almost nothing left. Stones were re-used to make new buildings.

[30:00] Around the year 1000 they build a monastery 12 km away from Narbonne, and that is one of the major things to see if you spend a day in the area, it is called the Abbey de Fontfroide. It is a Cistercian Abbey and Church. This is a Mediterranean climate where it smells and feels like Provence even though technically it is not. Very much worth a visit!

[32:09] The Cathedral of Narbonne is called Saint-Just Saint Pasteur (Elyse mis-spoke and called it Saint-Just Saint-Paul, she got the wrong saint!). It is a large Cathedral (4th largest in France) and what is unusual is that you can go up the tower and stand outside on the parapets. You can see out towards the sea and get lovely views.

[35:04] Narbonne is 41 meters tall and still standing! And it is gorgeous and impressive. You can see the cloister, there are many buildings attached to it, some of which have been turned into museums. The only Cathedral that has the Bishop’s Palace right up against the Cathedral (it’s that way in Avignon too) and you can visit some of that too.

[36:54] Other Churches you can visit in Narbonne. The city center of Narbonne is a UNESCO World Heritage Site, so it is getting taken care of very well. It is not a very large city center. There are a few lovely pedestrian streets. There is the Canal. There are pagan times remnants as well.

[38:53] Narbonne went into decline after the Wars of Religions (XVI Century) because it’s an area that mostly produced low quality wines and you can’t make a fortune on that.

[42:16] Cistercian monasteries were not painted to keep them austere and they have wonderful acoustics.

[43:12] From Narbonne you can go east to the Massif de la Clape. It’s a lovely place for bike riding and hiking, this is also where you’ll find the Gouffre de l’Œil Doux a sink hole with turquoise water.

[45:29] The beaches around the Massif de la Clape are not high-end beaches. It has been kept natural for the most part with some campgrounds, a few vendors, including wine vendors.

[47:07] The AOC Languedoc-la-clape wine is a good wine, similar to Corbières or Minervoix, full-bodied.

[47:42] Other places you could go nearby are Gruissan Plage with houses built on stilts. You could also get to Port-la-Nouvelle, a bigger  and more modern town.

[48:30] Narbonne also has two Baltar-style markets (like the old Halles de Paris which were destroyed) with beautiful glass and iron work. One of those markets in Narbonne (Les Halles Centrales) is a great place to have lunch, there are restaurants.

Categories: Montpellier Area, Off the Beaten Track in France