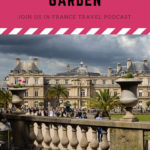 The Luxembourg Gardens Are a Favorite

The Origins of the Luxembourg Gardens

[04:06] At first there was a large Palace and they built the Luxembourg Gardens around it. The large Palace you see today is the French Senate, this dates from the late 1500s. But first, there was a smaller palace that is now off to the side. The small palace dates from the late 1300s. It was the residence of the Duke of Luxembourg, and it had a small garden and orangery to begin with.

Marie de Medici Commissioned both the Palace and the Luxembourg Gardens

[07:00] Marie de Medici was the wife of Henri IV and a cousin to Catherine de Medici (who was the wife of Henri II and they are hard to keep straight!) Marie grew up in Florence with the Boboli Gardens. When Henri IV was assassinated in 1610, she became the regent. She hated the Louvre, so she hired Italian designers and engineers to build her a wonderful palace and gardens. You can’t visit the French Senate other than on the Week-End du Patrimoine each September.

[10:53] Marie de Medici also commissioned a series of 24 paintings on her life by Rubens. You can see them in a special wing at the Louvre. When you visit the Louvre it is good to target a particular area to look at so it is not so overwhelming and this cycle of paintings by Rubens would be a good choice for that!

The Medici Fountain at the Luxembourg Gardens

[12:57] Marie de Medici kept the name Luxembourg for the park, but she had the fountain named after herself. It is not a large fountain, but it was a replica of one in Florence. The reflecting pool was added later. This fountain is really dark by now, it would look much nicer it they cleaned it up. This is in stark contrast with the Senate that looks lovely and creamy.

[14:58] The style at the time was to build symmetrical gardens and that’s what they decided to do at the Luxembourg Garden, except for a small part of the garden that is more English-style. The Statues were not part of the original design of the garden, they were added in the late 1800s, Annie will talk about that later on.

Historical Tidbit: Marie and her Son Louis XIII Didn’t Get Along!

[165:48] In 1642, Marie’s son kicked her out of the Palace and the Luxembourg Gardens and she had to go live in a different palace. The palace was turned into the French Senate after the French Revolution. In the meantime it was a museum that has since moved to the smaller building that was owned by the Duke of Luxembourg, a good place to visit if it starts raining while you are visiting.

[18:25] The Luxembourg Gardens today belong to the French Senate. As such, it is an official governmental center, it is well protected and could be closed on account of a terror alert, but we’ve never seen that happen.

The Attractions You Will Find at the Luxembourg Gardens

[20:18] The Luxembourg Gardens are tiny compared to major parks in world capitals. It is only 23 hectares of which 21 are open to the public. By comparison, Central Park in New York is 315 hectares. Hyde Park in London is 256 hectares. A small park is better in Annie’s opinion because there is so much in a small space, it’s easy to enjoy because all the different attractions are near one another.

Other Major Attractions You See Near the Luxembourg Garden

[33:00] The Pantheon is nearby (episode 71). You also have the church of Saint-Etienne-du-Mont is next to the Pantheon, Annie’s favorite church in Paris. You can also see the magical steps in Midnight in Paris next to the church. The neighborhood of Saint-Germain-des-Près is also nearby. Beautiful stores, lively most of the time. The theater of the Odeon isn’t far, Elyse thinks it’s gorgeous. The Marie Curie Museum (episode 79). It is also a lovely area to stay in if you like a quiet area.

The Luxembourg Gardens Are a Must-See

[37:43] If you are going to Paris, even if it is your first time, go to the Luxembourg Garden. You will feel a part of French life that is genuine, posh, historical, and pleasant. There are also photography exhibits outside of the garden, it’s fun to walk around the outside of the gate to see that too. We like the café called Le Petit Suisse on rue Vaugirard. It is full of Parisian charm, you will love it!

Is It OK to Bring a Bottle of Wine to the Luxembourg Gardens?

[39:42] Whenever Annie goes to the Luxembourg Gardens she sees people enjoying wine there. They bring a bottle of wine to share with friends. It’s a bit crass from a French perspective, but not forbidden. Open container rules in France are very lax, unless you’re a homeless person or it’s an area where students get out of control.

[43:00] Like any other fenced park in Paris, you will find free WiFi at the Luxembourg Gardens.