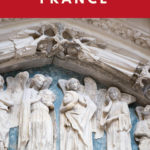 Bordeaux is one of France’s largest (by population) and best known cities. Situated on the estuary called the Gironde (the name given to the department as well) at the place where two major rivers, the Garonne and the Dordogne empty into the Gironde, it is a major port and cultural center.

Ancient city, called Burdigala by the Romans, and first settled by a couple of Celtic tribes, one of which, the Vascons came to be called the Basques or the Gascons, it has had a prestigious and complicated history for over 2000 years!

How to Get to Bordeaux

Bordeaux is situated at approximately 500 km from Paris, and is reachable by car, by TGV train (2h30) or by plane from Paris. It is 220 km from Toulouse, its historic rival in all things!, and it is about 200 km going directly south to Spain (Basque country).

Bordeaux Is 100km from the Atlantic

If you go due west from Bordeaux you come to the Atlantic coast, and endless miles of beach, heavy waves and pine forests (south of Bordeaux) in an area called les Landes. If you go across the Gironde estuary on one of the bridges in Bordeaux, you get to the area called the Blaye, one of the wine growing regions that surround Bordeaux; the others being the Médoc, the Grave, the Entre deux Mers, and the St Emilion areas. The estuary is 75 km long and at the largest point where it opens into the Atlantic ocean it is 12 km wide.

In 2007 the old part of Bordeaux, which runs along the Garonne River and the Gironde, was named as a Unesco World Heritage site because of the beautiful 18th century limestone architecture, the many squares with old vestiges of buildings, the elegant theatre, and the historical bridges that cross the Garonne.

It is a city that has modernized a lot in terms of its infrastructure in the past 20 years, specifically by creating a vast network of public transportation, largely buses and three tramway lines, and by having a very dynamic tourist center.

Day-Trips to the Bordeaux Wineries

From Bordeaux you can take an excursion, by bus (from the Tourist Office or from the train station) or by car (not by train) and go spend a day exploring a part of the vast wine-producing region that surrounds Bordeaux on every side.

One full day is necessary to “do” the Médoc, a large area filled with some of the most famous wineries, you can visit many of them and taste the wine. The town of Pauillac, famous as a wine trader’s town is along the Gironde, and although not very pretty as a little town, is the perfect place to stop and have a lunch and then go exploring the châteaux and major wine houses of the region including the Rothschild’s two châteaux.

How to Visit the city of Bordeaux

Bordeaux has lots of lovely streets and little squares to walk through and around and you can take a long walk along the banks of the Garonne and go up the Gironde on a tramway, so you get to see the old port that has been turned into a new chic shopping and restaurant area. The real commercial part of the port is further up river along the Gironde, and if you drive up that way you will see many huge container and cargo ships as well as some major cruise ships which stop there.

The old port, called the Port of the Moon (Lune in French) because of its shape, was historically the center of all the major economic activity for Bordeaux and the area.

How Long Should You Stay in Bordeaux?

Bordeaux is good for a two-day visit; it has some excellent museums, including the Musée d’Aquitaine which has a rich collection of art and objects from prehistoric times through to the end of the 19th century.

Ocean and River Cruises from Bordeaux

There are both ocean and river cruises that you can take from Bordeaux, those are a lovely way to explore the area too.