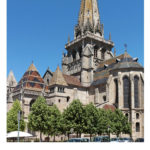 Beaune in the Côte d’Or (home to an American University after WWI), it is popular and attracts a lot of visitors. Jeff prefers to visit places that don’t attract tourists by the bus-load and this is what we discuss on today’s episode of the podcast.

Le Creusot is known for its steel production and you can see the old steam hammer there, it is not in operation but is the biggest one of its kind. The TGV from Paris stops there 3 or 4 times per day and it is a 1.5 hour ride.

Nicéphore Niépce is credited for taking the first surviving photograph in 1822. There’s a free photography museum in Chalon-sur-Saône called Musée Nicéphore-Niépce. Around a photography theme, you could also visit the home where Niépce was born in Saint-Loup-de-Varennes, but it’s not open year-round. Someone walled in Niépce’s studio and it was forgotten until 20 years ago. They found the chemicals he used to take this oldest photograph in the world.

The Château de Brancion is great to visit with kids, this used to be a fort, and April to October kids can dress up as knights and other things and they always have activities going on. Also really nice views of southern Burgundy.

It’s all off the Voie Verte which are 400km of protected bike paths around the area. You can rent bikes and visit the region that way. The bike paths are built on old rail lines and they kept the train stations which are fun to see. There’s also a Voie Bleue along the Saône river.

Cluny, the once largest church in the world. This church was destroyed during the French Revolution. It’s a small town, you can visit the Abbey, it’s one of the few churches in France where you have to pay. There’s a Haras National (National Stables) and a race track (not open year-round) where you can see trotting. Market day is Saturday morning in Cluny. The town also has nice streets, including rue d’Avril where the Hôtel des Monnaies is situated. It’s a great place to spend the night or a day-trip. You can also do train spotting there because on the road that goes from Cluny to Azé which goes over the TGV tracks, if you stop there 10-15 minutes, you’ll see TGV go by at full speed. Cluny is also on the Voie Verte.

Small Wine Towns in this Area

Plottes is a wine village where you can buy wine directly from the producer. If you go to the Monument aux Morts you’ll see the building where the villagers placed the bodies of some Americans who died when their plane crashed in the nearby woods on Nov 13th 1944. There is a plaque on the building with the names of all the Americans.  The winery Jeff likes is called Domaine Clot Gandin.

In southern Burgundy you’d pay between 5 and 10 € for a good bottle of wine. It’s less expensive because it’s not as well-known. There’s a lot of wine “savoir-faire” (know-how) in this area and even bottles under 10€ are pretty good.

There’s a “cave” in the town of Lugny and it’s Chardonnay wine. The name Chardonnay comes from the town of Chardonnay in Burgundy. There’s also a “cave coopérative” in Viré and in Saint-Gengoux-le-national where they sell you wine from local producers.

Everybody goes to Beaune where it’s jammed with tourists, but you don’t have to go far to be off the beaten track in France where you will likely be the only tourist.

There’s a lot of love in the area with two towns bearing the name “amour”: Saint-Amour and a Saint-Amour-Bellevue are both in this area.

In the “Bresse Bourgignonne” you could go to Louhans. On Easter Monday the market in Louhans is amazing.  Night markets are developing in some areas in France, but it’s going to take some change in habits before they truly catch on.

If you go to Tournus you’ll be able to see a nice church and is right on the Saône river. Also you can visit the Hôtel Dieu – Musée Greuze. Hôtel Dieu is a great medical museum. You can see how the hospital was 200 years ago , in particular the “lits clots” or closed beds, a gorgeous apothecary, the old beautiful silverware room.

This is where the recording got messed up unfortunately, so Jeff didn’t get to finish his thought, but these are the hospital beds he was describing.