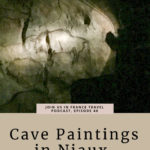 A Visit to Foix and Niaux

Just to get warmed up, we begin this episode with the famous tongue twister:

Can you say it? Don’t worry, it’s not required for you to go visit Foix and the cave painting sites nearby. And unlike Lascaux, the actual cave in Niaux is open to the public and you visit with a flashlight! Enjoy the show and Happy New Year!

FOIX  – Castle and Town in the Pyrenees

Capitol city of the Ariège (both a department and a historical region)
Ancient home of the powerful Counts of Foix in the Middle Ages
Population – approx. 10 000 the people there are called Fuxiens! It is the second most important city in the department of the Ariège in terms of population – a rural department with very little industry in the Pyrenees Mountains. Altitude of Foix ranges from 358 to 933 m (a hilly and steep town along the banks of the Ariège River.

How to Get to Foix

Foix is 83 km south of Toulouse. You can go by train from Toulouse, or by car in just under an hour.

The Ariège, and the town of Foix and its surroundings, was a region that was mostly deserted in the early part of the 20th century. Traditionally a poor agricultural region, there was a massive emigration to the “new world” and many people from the Ariège area went to the United States or to South America.

The region was traditionally one with textiles and forges and all the small industries connected to wool and sheep and metal. Now the industry centers around talc which is mined near the town of Foix, and tourism.

The climate in the foothills of the area and at Foix is basically humid. There are warm summers and cold winters but the snow stays up on the surrounding mountains and in the town of Foix there is usually rain when there is snow further up. There is rarely ice in Foix and in the summer it is agreeably cool at night.

What to see in Foix

Foix is famous for its incredible medieval castle, dating back to the 1000’s. It is a fortified castle built on top of a rocky cliff overlooking the medieval town below. The castle, which when built, connected to the monastery of St Volusien, was the home of the famous and important Counts of Foix for several centuries.

Built of the local stone, it is most impressive to see, high up on the rock and looking down at the town. It is famous for having three towers, two that are square and that were built at the beginning of its construction, when all castles were fortified and required defensive towers, and the third tower, which is round, and which was added on in the 14th century when the area was controlled by France.

The old medieval center of Foix, which is very small, is filled with half-timbered houses and narrow winding streets and since the castle hovers over the town, it gives a sense of what it must have been like in the Middle Ages, with the powerful lord up above and the townspeople down below. On the other side of the stone walls of the castle is the old church and what is left of the monastery of Saint Volusien, who is the patron saint of Foix.

The Role of Cathars in Local History

The history of this area is connected to the complicated story of the Cathar; a group of Christian dissenters who became very influential in the 1200’s in the entire region of the southwest from Toulouse to Carcassonne and to Foix. The Cathar people as they are called now, wanted to reform the Church and in order to stop their growing influence (and for the French king to gain control of the region which was independent) a war was made by the French king and the Pope against the people of the southwest of what is now France, to stop this movement.

The story of the Cathar is a long and complicated one – for the visit to Foix, what is important to know is that the Counts of Foix were defenders of this new religion, and the wife and sister of the Count of Foix were major players in the new religion, so he had to defend them against the French king. After a long battle and many years of fighting the French king won and the town of Foix and its lords had to swear allegiance to France. But it wasn’t until the 1600’s that the region around Foix actually became annexed to the kingdom of France.

Visiting the Castle in Foix

Visiting the castle is fun, (but a good walk up to the top of the hill) because it is now a museum that has several parts – one devoted to life in the Ariège region in the past, another about the history of the Counts of Foix, and a third that tells a little of the story of the Cathar. Recently renovated, it is fun for all the family.
The town of Foix also has a lot of music festivals, in the summer and in the Fall but also a vocal music festival in April. It is famous for its festival celebrating Gabriel Fauré, a native son.

The Ariège Is Mostly Rural

It is famous also for its agricultural fairs as well – there are two important ones in the summer when farmers and shepherds bring their wares down to the town to sell  – it is a great way to see the honey, cheese, breads, textiles and other products still produced in the area.

All around Foix there are many outdoor activities – hiking, kayaking on the Ariège River, cross-country skiing in the winter, and visiting some of the many caves that are scattered through the cliffs in the mountains nearby.

Among the most important caves are a group of caves that are very important because they are among the last caves that have genuine examples of prehistoric drawings, engravings and marks, from the period of 17000 years ago, to still be open to the public. These caves are impressive to see, and it is a real privilege to go into one and see the work done by humans so long ago. The two main caves that are open are Niaux, and La Vache. Niaux is a reservation only cave – they limit the number of people who can enter each day to avoid too much pollution which ruins the drawings on the walls. The cave called The Vache is a shelter and habitat that is across the valley from Niaux and it is thought that the people who lived there were the ones who did the drawings in Niaux.

There is also the cave called Bedeilhac, which has some footprints, hand marks and signs on the walls and is a huge cave. Near there is the Park of Prehistory, a huge site with animations, a reproduction of the inside of Niaux and a restaurant. It is a great place to go with a family.

Also, there are several caves that are just interesting formations, the cave of Lombrive, a huge cavern where there are music concerts in the summertime, and the cave of Labouiche, which has an underground river that you can go onto with a guide. Since this part of the Pyrenees is filled with caves, there are a lot of spelunkers (and rock climbers) who like to go there.

Foix is a good place to stop and branch out for outdoor activities and at the same time get a feel of what it must have been like during the Middle Ages, to live in a small city in the foothills of the mountains, when everyone either worked the land or did small crafts or occupations.

It is a favorite stopping ground for hikers, campers (there are many campgrounds nearby) and those going on to the higher mountains either to walk, to ski, or just to discover the wonderful valleys and forests that are part of the area to this day. There are many small villages with little ancient chapels, stone houses and well-kept trails in the area and there are many books to help out those who wish to explore.

Foix is a great discovery in the southernmost part of France, not far from Toulouse.