Lavaur is a small city of about 11,000, 45 kilometers northeast of Toulouse in the Tarn department. It is close to Gaillac, to Albi and to Castres as well. There is a train that goes there and there is the big autoroute too.

Lavaur is known as a pretty, brick town, with a famous Gothic cathedral, also in brick. There is another beautiful church that belonged to the Franciscans, and a history that goes back very far to the beginning of settlements in the southwest of France.

Today, a bustling town that has become a “bedroom” neighbor of Toulouse, with an incoming population that has almost doubled in the last 20 years, Lavaur is worth a visit for its historic monuments and its beautiful brick architecture.

St Alain cathedral: A magnificent southern Gothic cathedral that is all in brick. It has an altar table that dates from the 11th century, beautiful painting and lovely stained glass windows that are more modern but striking to see and there is a famous organ from the Renaissance. St Alain is also famous for its automat called a Jacquemart, a human figure that turns around in the bell tower and strikes the hour and half hour. It is unique in the southwest of France.

St François church: This impressive Gothic church is what remains of the huge Franciscan monastery that was part of the ancient city of Lavaur. The monastic buildings were taken down during the Revolution, but the church, with a gorgeous 19th century interior, is still used and is in the center of the town.

The Cloister that has vestiges of the monastery of St François redone in the 1600’s.

The old streets with houses from the MIddle Ages, some half timbered, some very elegant: all in brick.

The old Hospital which was built in the early 1700’s and became a Royal Manufacture for Silk. It is an elegant Classic style building that is still part of the hospital system of Lavaur.

A convent, from the 1800’s, that is now the municipal museum and mediatheque which has a lovely garden overlooking the banks of the river Agout that surrounds Lavaur.

The park by the river with the view of the ensemble and the old market place.

The City Hall, a wonderful example of 19th century architecture.

Besides being a small, charming but bustling town, with a lot of culture, a very good organic food market and its share  of old streets and buildings, Lavaur is well known in history for having been the site of one of the worst massacres that occurred during the war that was waged against the Cathars

What happened in Lavaur helped turn the tide in the war and the end result, as we all know, is that this region, the huge lands of Occitania, were eventually signed over to the French king.

In the 1100’s more and more of the nobility of the southwest of France, which was the Countdom of Occitania, and most especially the women, converted to the new reform religion that we now call Catharism. We are in the height of Feudal times : each small area of land is ruled by a Lord, who in turn must pledge loyalty to a higher Lord, and so on up, until we get to the rulers of a region. In the case of Lavaur, the high rulers were the Viscounts Trencavel, who reigned over a vast region from Albi to Nîmes including Carcassonne and smaller places like Lavaur. These Viscounts were closely related to the Counts of Toulouse, who were the ultimate rulers governing Occitania, from west of Toulouse, into the Tarn and as far east as St Gilles on the border of Provence.

Lavaur was a well protected, high walled medieval city starting in the 1000’s. It had two important monasteries and part of Lavaur was a “sauveté”, a space that guaranteed protection to whomever came into it, protection by the Church.

But by the end of the 1100’s the Trencavels who were either Cathar or sympathic to the Cathars, wanted to rule their domaines with no “higher” ruler above them. The Counts of Toulouse decided to stop this ascension of power of the Trencavels and in 1182 there was a huge battle in and around Lavaur. The Count of Toulouse and his armies won the battle and Lavaur came under his jurisdiction and the lords of Lavaur had to pledge allegiance to him.

But! But ! Lavaur by the end of the 1100’s was almost completely converted to the new religion, Catharism. When the Count of Toulouse took over, he reclaimed the dowry of the Viscount Trencavel, whose family was from Lavaur, which was a humiliation and this demand created enormous resentment among the Trencavels and the people of Lavaur.

By the very early 1200’s, it was clear that the Pope wanted to eliminate this new religious movement which was sapping his authority and his revenue. He called upon the Count of Toulouse, Raymond VI, to provide him with part of the army that would attack the Cathar strongholds. Rayamond V, his father, had been sympathetic to the new religion, but was still Catholic, and so was a majority of the citizens of Toulouse. Threatened with excommunication, the Count of Toulouse, obeyed the Pope and joined his soldiers to the Crusade against the Cathar, at first at least.

The Crusade against the Cathar began in 1209, and the cities that were attacked included Carcassonne, the Trencavel’s main château and home, after Beziers and Narbonne, and smaller places like Trêve and other Cathar towns were all taken on the route west to conquer and claim Toulouse and Albi. After  taking most of the Cathar bases along the way, the French/Papal Army headed by the northern baron, Simon de Monfort decided to attack Lavaur in 1211. Why attack Lavaur?

Lavaur was known as a Cathar stronghold where the Cathar bishops came to preach and where there were reunions of the Parfaits, the clergy of the Cathar The rulers of Lavaur had already been for two generations, members of the “new” religion. In 1211, Dame Guiraude de Laurac, from a noble family, was the widowed ‘ruler” of Lavaur. She and her entire family, which included three sisters and two brothers, had become Cathars. One of her sisters was even a high priestess, a Parfaite. Her knights, called the faydits, were Cathars and faithful to her too.

But knowing they were going to be attacked by de Montforts troups, they sent word to the Count of Toulouse, who was now their ‘ruler” or chief, to send knights and soldiers to help them fight off the invaders. Because in spite of having high ramparts, their army was not big enough to withstand the invasion without ourside help.

It seems that the Count of Toulouse, either by spite because of the rivalry with the Trencavels, by greed, wanting to gain whatever the Papel envoys had promised, by miscalculation, or by incompetence, decided to send just a handful of knights and a small group of foot soldiers to Lavaur

The knights who were loyal to Dame Guiraude, the Cathar, managed to hold the fortified town of Lavaur for one full month. After that, with too few resources, and de Montfort getting about 6000 foreign mercenaries as reinforcement, the Cathar army was no longer able to prevent the city from being taken. On May 3, 1211 Lavaur was officially captured by the Royal/Papal troops.

The foot soldiers who were sent there,  who had fought and survived, but were “just” foot soldiers, were allowed to leave. The 80 knights who had pledged allegiance to Dame Guiraude were sentenced to death and were hung. But even worse, was the punishment inflicted on Dame Guiraude and her brother, Aymeri. As the leaders of the resistance, and as a “heretic” she was thrown into a deep well and stoned to death. Her brother, who had tried to play both sides in the war was decapitated and displayed publically and all of the 400 local Cathar citizens were sent to the stake as heretics .

This event, known as the Lavaur Massacre, was the turning point in the Cathar War. From this moment on, De Montfort was able to conquer Albi and then Toulouse. And as we all know now, even though there was a movement of resistance again in 1218, when the Baron de Montfort was killed, the fighting continued between the Royal/Papal forces and the various lords of the south, until a treaty was signed in 1229 giving over Occitania to the French king.

If Lavaur had been better protected and saved, there was a good chance that a unified army could have beaten back de Montfort. The rivalries and jealousy among all the southern rulers, led to their defeat. Toulouse would not have been taken, and who knows, perhaps the vast regions of Occitania would have stayed a separate kingdom at least for a good while longer.

Dame Guiraude is known as a courageous martyr of this Cathar War  who valiantly tried to save her town and her people from the massacre. In the park behind St Alain, the cathedral, in a grassy and shady spot, is a plaque commemorating her: her faith and her bravery and the faith of the 400 citizens who perished. A dove which is supposed to represent the Cathar  is on the plaque.

So when you visit Lavaur, besides the lovely houses, the little squares, and the two impressive churches, stop for a moment in front of the plaque and remember this terrible event and the bravery of the woman who “ruled” Lavaur, Dame Guiraude. 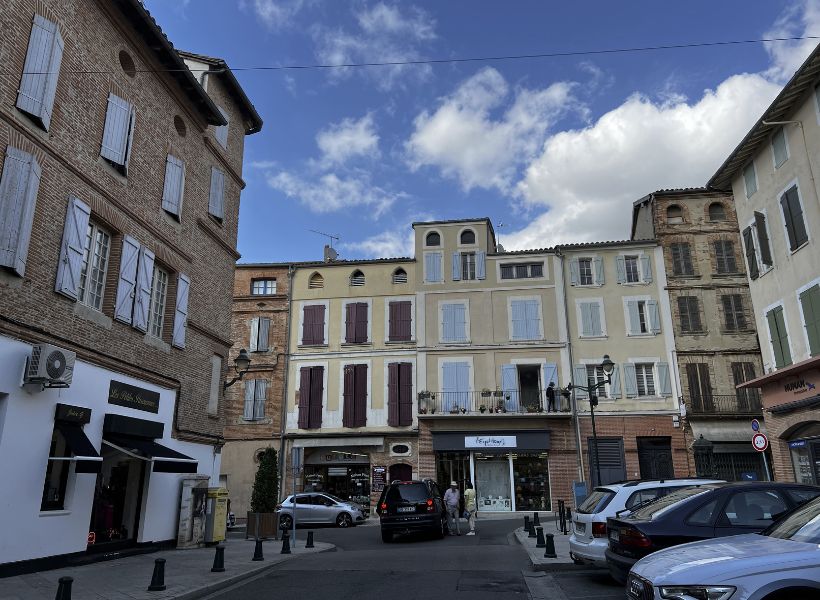