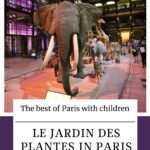 The Jardin des Plantes in Paris

Composed of several buildings and a huge collection of greenhouses and gardens, the Jardin des Plantes is a 24 hectare (53 acre) park and museum dedicated to the study of all natural sciences.

It is situated in the 5th arrondissement, not far from the rue Monge and the Grande Mosque and is accessible by metro station Jussieu (lines 7 or 10), or Place Monge (line 7) and is walking distance from the Austerlitz train station (metro 5 and 10). It can be entered from several sides. It borders the Seine River on the north.

A haven of green and a place of discovery, the gardens are free to the public and are open all the time from 8 am on, while the different museum buildings that include the Hall of Evolution, the Hall of Paleontology, and various Halls of Animal Species, are paying.

Prior to the creation of the Jardin des Plantes there had been many medicinal gardens in monasteries all over Europe, but new scientific ideas led to the expansion of botanical gardens and a greater interest in the history and use of plants was very important in scientific thought. At first, it was the medical schools that wanted to have medicinal gardens, but they kept their activities secret as part of the ‘privilege” of being a physician.

In 1616 one of the king Louis XIII’s doctors, Guy de La Brosse proposed the creation of a Royal Garden of Medicinal Plants, which would be open to all for scientific study. After years of defending his project and in rivalry with the School of Medicine, de La Brosse finally acquired a chunk of land along the Seine, in what was really countryside at that time, to create his Royal Medicinal Garden. The king, Louis XIII was very interested in advancing the sciences, and in particular, everything connected to plants.

The official opening of the Jardin Royal de Plantes Medicinales was in 1635 and was immediately used by doctors and natural scientists to ‘study” different plants and to experiment with the creation of new ones. Because this was the time of great colonial expansion and exploration, literally thousands of species of plants from all over the planet were brought back to Paris and were planted and studied in the Royal Gardens; and, unlike at the Medical School, conferences were held by eminent scholars in botany, chemistry and anatomy, and they were open to all. Not only that, but the conferences were held in French, not in Latin, specifically to make them available to a greater public. At the end of the 1600’s a huge amphitheater was built to allow for more people to attend the conferences.

From the beginning too, there were hot houses for the exotic tropical plants. The successive kings’ patronage meant that there was no worry about subventions and the research and exploration of new ideas could continue and was greatly encouraged.

In 1718 the Royal Medicinal Gardens became the Royal Botanical Garden and a man named Buffon was named superintendent. This young aristocrat was a brilliant student of all the sciences, who excelled at mathematics, and he was passionate about new scientific methods. He spent some time in England and was influenced by Isaac Newton and “new” thinking about scientific observation and experimentation.

Thanks to him the Gardens expanded, doubling its size, and a Menagerie was added to the Gardens. He was convinced that all the sciences, including geology, should be included in the park and he had many new greenhouses and buildings constructed. In 1729 a ‘Cabinet’ of Natural History was added. Buffon was director of the Gardens for 50 years until his death at the age of 80, and it was under his direction that the Jardin des Plants was enlarged, added new buildings for scientific study and became famous.

Buffon is the author of the massive and definitive work called ‘A History of the Natural World’ which he wrote over the course of his long life. It is a masterpiece of observation and scientific speculation that covers 36 volumes! And, until recent times, was the definitive work on natural observation.

One of the last things he had made was a metallic kiosk he called the Gloriette, the first ever structure made entirely with a metallic frame. This kiosk became a center of lively discussion and a meeting place for the ‘enlightened” of Paris, men and women, who wanted to explore new ideas would meet here and have lively discussion and debate. The Gloriette, which had become rusty and structurally unsound, has just recently been restored and is back to its original spot in the middle of the gardens so you can go and sit in the Gloriette and imagine being back in the 1700’s.

During the French Revolution, in 1793, the Convention declared that the Gardens and the buildings, the laboratories, library and all the collections would become the National Museum of Natural History, which is what it has been its official name ever since.

In 1792 the idea of a huge Menagerie was created to house living animals to add to the collection of ‘natural” things. To begin with, the wild animals that were used in street circuses were confiscated and brought to the menagerie. The, when the Revolution began, the private menageries of the king and other royalty were taken and added to the collection when all their properties were confiscated by the Revolution. Fully established in 1794, the Menagerie at the Jardin des Plants is considered to be the second oldest zoo in Europe.

In the mid 1800’s it was a huge and popular attraction to go to the Jardin des Plantes Menagerie and see the elephants, camels, lions and other large animals. In 1827 the huge “star» was a giraffe named Zarafa. But, the end of the 1800’s during the war with Prussia in 1870-1871, many of the animals in the Menagerie were killed by bombing and others were eaten by the people of Paris who were being starved.

All this time, during the 1800’s, new galleries were built with the metallic framing that Buffon so liked. At the beginning of the 20th century there were new buildings added on in Art Deco style. In the late 20th century many of the structures were renovated and modernized including a new greenhouse for plants from New Caledonia and Polynesia. All of the buildings in the Jardin des Plantes are historical monuments now.

Just in the Gardens part alone there are: An Alpine Garden, a Botanic School, special sections for roses, peonies, irises and a center of ecology. These are all free and open all the time.

As far as the Natural History buildings go, there is a Vivarium for reptiles, a Aviary for some birds, the Halls of Evolution and Paleontology and Minerology, all of which have enormous collections and are very impressive in size. 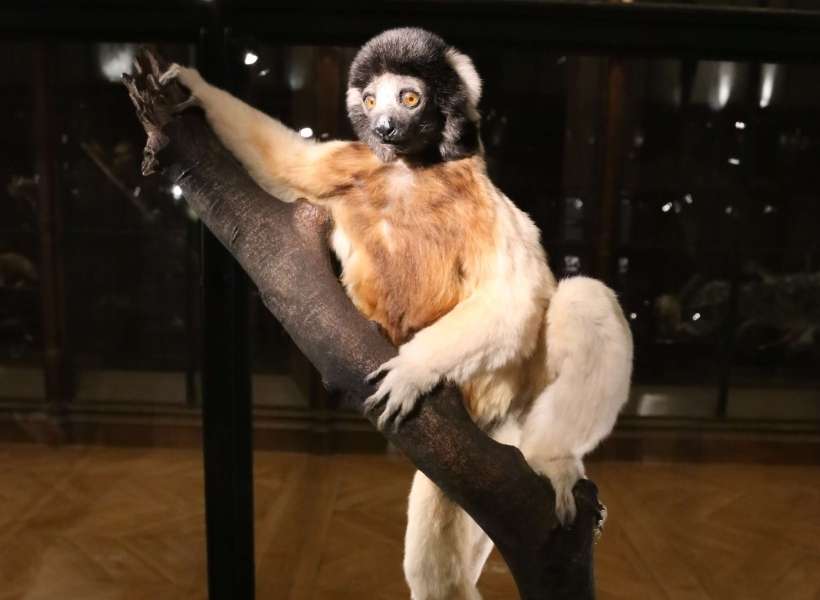