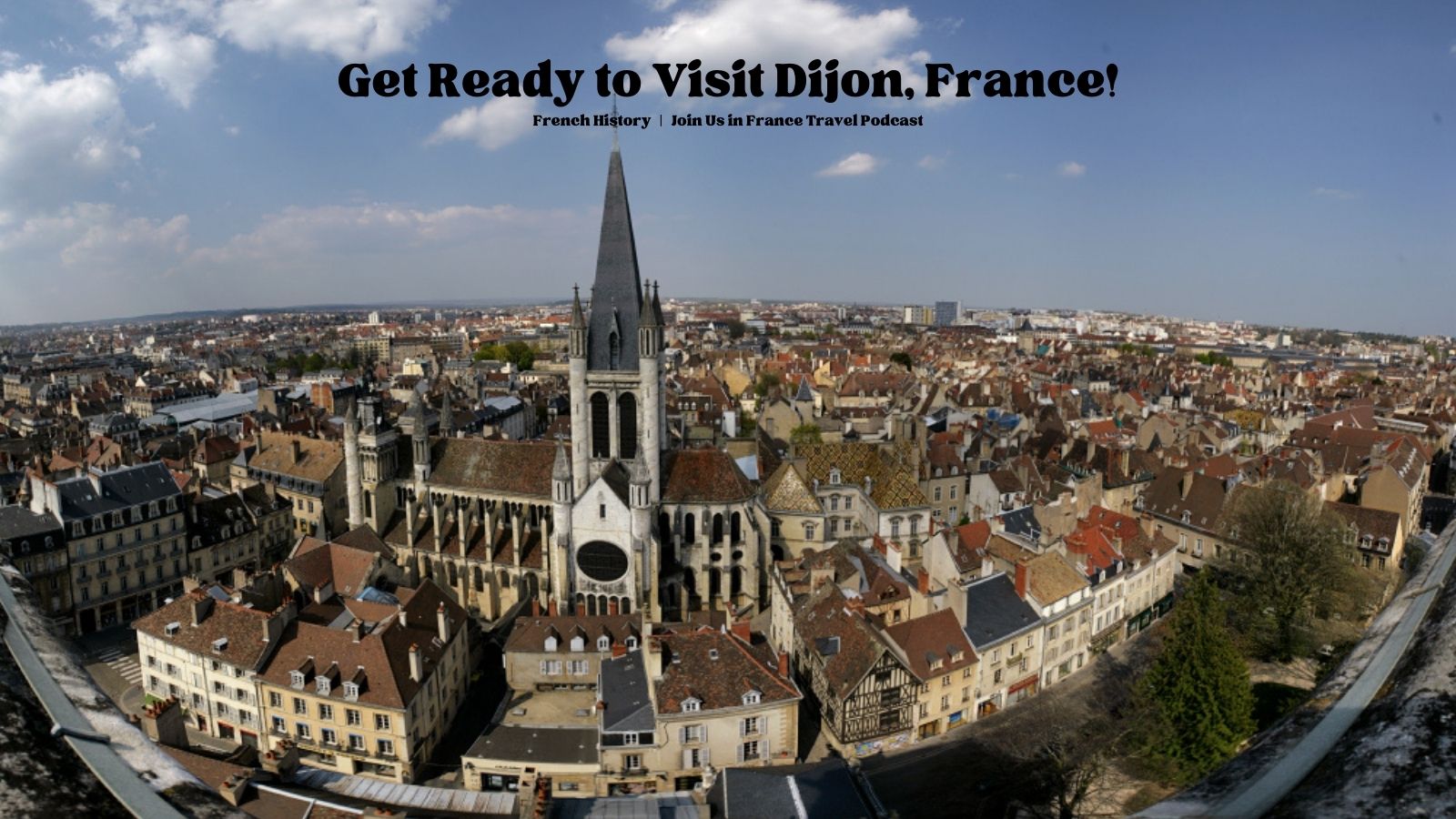 Dijon is 310 km from Paris and 190 km north of Lyon and is the capitol of the Côte d’Or department. Easy to get to by car, or by train, it is a city that figures as a central spot in the history of France?

One of its nicknames is the City of 100 church bells. It is very important in history as the ancient capitol of the very rich and powerful Dukes of Burgundy

Burgundy is a large historical region of France that is southeast of Paris and is situated along the valleys that connect the Loire, the Saône and the Rhone. It goes from just above Dijon the ancient capital of the dukedom, to south just below Macon, covering about 250 km.

Dijon is a city with an old historical center that is very lovely to walk. It is also a city known for being a place to eat well. Several products are associated with Dijon and its region: wines of course, and mustard and crème de cassis. Burgundy wines and Dijon mustard are also part of the old and glorious history of Dijon as capital of Burgundy when, in the 14th century, the Dukes of Burgundy were the richest and most powerful rulers in all of what is now France.

PLACES TO SEE AND VISIT IN DIJON

Dijon’s ancient center is filled with lovely examples of medieval, particularly Flemish architecture: colorful roof tiles cross-crossed with patterns and walls built with half timbering. The Flemish style of architecture (as seen also in Beaune) is typical of this region, as Flanders was part of the kingdom of Burgundy and many artists and architects of Flemish origin were asked by the Dukes of Burgundy, to work here during its ‘golden” era.

Ancient Dijon – Rue Verrerie has many houses from the 1400’s and still has the original cobblestones A good place to get an idea of the “prosperous” medieval Dijon!

The Duke’s Palace – once the home of these powerful rulers, it is now both the Courthouse and the wonderful Fine Arts Museum of Dijon. The Philippe Tower dedicated to the ruler Philippe le Bon is attached to it.

The Place de la Liberation (fronting the Palace) is a semicircular ‘plaza’ that was the scene of the dramatic liberation of Dijon at the end of WWII. Attached to it is the Rue de la Liberté

The St Nicolas Tower is the last vestige of the ramparts and medieval fortress that was Dijon in the early Middle Ages.

The Archeology Museum in the ancient Abbey of St Bénigne is rich and gives an idea of the 2000 or more years of history of Dijon and Burgundy.

The Cathedral of St Bénigne, the patron saint of Dijon

The Museum of Burgundy Life, an ethnological and folklore museum

FOODS ASSOCIATED WITH DIJON AND BURGUNDY

HISTORY of DIJON AND THE DUKES OF BURGUNDY

Dijon is one of the most ancient cities of France: its origins go way back hundreds of years before even the arrival of the Romans. There are just a few tiny vestiges left of these ancient times.

Occupied and settles by various groups over the centuries and treasured by the Romans for its geographic situation and rich soil, it was important as a trading center because of its situation at the juncture of three rivers.

Many centuries after the Romanization of Gaul, a Germanic tribe, the Burgondes, with powerful connections to Charlemagne, took over this region, and gave their name to it for posterity.

However, the most important and significant part of its history is in the later part of the Middle Ages, during the period from the early 1300’s to the early 1500’s. Dijon was the capital of the region of Burgundy which was for centuries and centuries a separate kingdom that had been ruled by its dukes. These dukes were in fact the cousins of the kings of France, all of them descended from the original inheritors of the throne, the grandsons of Charlemagne. So, for centuries, this area was given over to the first cousins of the king of France. Royal blood and lots of rivalry too!

That meant that for centuries there was both bad blood and intermarrying among all these cousins to keep the ties and to compete for power. As Burgundy was considered to be a separate kingdom, even though technically under the thumb of Paris, the Burgundy rulers made many alliances and intermarried more with English royalty and Spanish royalty than with the French. As the Dukes of Burgundy became richer and richer through commerce and these alliances (which helped trade enormously) they became more and more ambitious. Flanders and the southern part to what is now the Netherlands, was taken over by the Burgundians as was Belgium, parts of Alsace, Luxembourg, Picardy, and the Champagne area too. their sphere of influence went from the region around Dijon and south, all the way up to the countries and territories north of France. Burgundy was bigger and richer than the kingdom of France in the 14th and 15th centuries and Dijon was its capital.

From the early 1300’s until 1477 there were four very important and powerful Burgundian dukes: Philippe the Hardy, Jean the Fearless, Philippe the Good (who had the palace built) and finally Charles the Reckless. This last duke, who like his ancestors, coveted and claimed the throne of France, rashly attacked Duke René of Lorraine who was an ally and feudal vassal of the king of France. And in a battle near Nancy, he was killed! So, with no legitimate male heir left, his cousin, Louis XI, was able to claim victory, and annex the entire region and dukedom of Burgundy to make France the biggest and most powerful country in Europe at that time. Dijon lost its importance as a capital but remained a prosperous commercial city.

It was apparently the Romans (yes, them again!) who brought mustard plants and seeds with them to Gaul. The Romans liked spices and very strong mixes in their food, and mustard plants are very easy to grow. As the Gallo-Roman culture developed and the local peoples took on Roman ways and Roman tastes, a flourishing market developed for the growing and selling of mustard seeds. At first, like in Indian cuisine, they were simply crushed and mixed in with other spices to make a sauce. But someone ages ago developed a method for crushing and heating the seeds and adding vinegar to make a paste. For centuries, it was this paste that was used in cooking.

As it turns out, the land in Burgundy, especially in the valleys near Dijon was excellent for growing mustard. And by the early 1200’s, there were texts that cited the “mout tarde” of Dijon. Although linguists believe that the word comes from Latin, ‘mustum ardens” which means burning marks a myth developed about the origin of the word.

“In the early 1300’s one of the Dukes of Burgundy, in battle with the Flemish and Dutch, cried out in the middle of a battlefield, “Moûlt me tarde!” which translates more or less as “I am impatient to get to my wine mash”! This became his slogan and the motto of the Dukes of Burgundy. Over time and many re-writes, it got shortened to mouttarde and the dukes’ troops were called the moutardiez of Dijon!

The commerce of mustard was so important that by the late 1300’s it was regulated for quality. This mustard was made from mustard seeds and vinegar. By the late 1400’s, when Burgundy with its capital Dijon, was the richest dukedom of what is now France, the commerce had taken on enormous proportions. In 1634 a “Confrerie of mustard makers was created” which in fact, still exists. This was the corporation that governed the recipe and the number of people who could produce and sell it. They started putting a stamp on the bottom of their jars to show what was a real Mustard from Dijon.

But it was in fact in 1742 that what we now know as Mustard from Dijon was created. A member of the confrerie named Jean Naijean changed the recipe and instead of using vinegar, he used the wine mash (called verjus in French) to mix in with the crushed mustard seeds. This changed the taste and made it more refined and smoother. And this is now what is called a “real” mustard from Dijon.

Mustard is even mentioned in literature. The writer Rabelais, known as a gourmet, called mustard from Dijon a “balm” to soothe the tastebuds.

By 1870 there were 39 Dijon mustard-makers. Today however there are only 4 left in Dijon.

In 1937 an AOP of Mustard of Dijon was created to guarantee quality and origin.

And, since 2009, there is a label, IGP, which means a Geographically Protected Indication) a label that reads, “Mustard from Burgundy”, which is the only label that guarantees that the mustard is really made in Dijon from seeds and wine mash that are from Burgundy.!!

Dijon is definitely worth a weekend visit. Besides the museums and the ancient streets, it is a place to enjoy very good food. If you have a car, it is very easy to visit the little villages surrounding the city and get a few wine tastings in at one of the hundreds of chateaux or caves for wine that sprinkle the countryside.

Touristy but less crowded than some other medium sized cities, it is a great discovery and a wonderful addition to your French experience!