Elyse’s Notes on this episode

LAFAYETTE, THE HERMIONE and the ARSENAL OF ROCHEFORT

Today we are going to talk about a wonderful visit you can do if you are in the Charente area, near or in La Rochelle or Royan or Saintes. That is to the Arsenal, the ship building area at the opening of the Charente River as it leads to the Atlantic, to visit the Hermione fregate, the ship that is the exact replica of the one that took the Marquis de LaFayette to the Colonies to help George Washington fight the British.

Rochefort is a lovely small city, only 35 km south of La Rochelle, or 40 km north of Royan on the coast. Built in 1666 as an Arsenal city in Classical style under Louis XIV it was conceived to be the largest and best military ship building port on the Atlantic coast. The city, like LaRochelle, is filled with lovely white limestone houses and straight streets and has a huge Museum center at the water that includes the Museum of the Marine, The Corderie (where they still make the cords and ropes used in ships) and the Arsenal, where all the workshops are for the many different skills needed to make a ship in the “old way”.

THE HERMIONE : FAMOUS WARSHIP OF THE AMERICAN REVOLUTION

The original frigate, the Hermione, was built in 1776, and put afloat in 1777. It was a three-mast war ship of the most advanced kind (for the time) with 26 large canons, 6 small canons, 6 anchors and a crew of 255 sailors. It was the second of a series of ships called Concordes, that made the fame of the French navy. The Hermione and its sister-ships were built with the express purpose of helping fight the English in the Colonies, as the French were serious rivals of the English in claiming a stake to the “new” lands in the Americas. And it was built in the Arsenal of Rochefort which was specifically designed to be the biggest and most impressive ship building port in the kingdom.

No doubt this ship like its sister-ships would have slipped into oblivion were it not for a certain Marquis de La Fayette, full name Gilbert de Motier, Marquis de La Fayette. He was a young nobleman, impassioned by new ideas and the spirit of liberty that the fighting in the Colonies inspired in him. Resolutely modern (one could say even ahead of his time!) from a family that was noble but basically liberal and progressive thinking, he was made a general at the age of 19! Born in 1757, in 1777 at the age of 20 he set forth for Yorktown, Virginia with arms to aid the Colonial Army as Captain on his ship, the Hermione. It was then the second crossing for the ship.

La Fayette became an aide to George Washington, whom he came to consider like a second father, and stayed and helped fight with the Colonial Army from 1777 to 1783. He was largely responsible for the victory of the colonists in the important battle of Yorktown in Virginia, a battle that even Washington hadn’t thought they could win, but which turned the tide of the war in favor of the Colonies.

Friends with Benjamin Franklin whom he had met in Paris, his experiences in the Colonies made him a fervent supporter of the French Revolution. Ironically, his noble birth made him, in spite of his political convictions, an “enemy” of the extreme elements of the Revolution, and he first exiled himself for five years, and was then taken prisoner in Austria because he refused to renounce his republican convictions. He returned to France in 1804, first supported then criticized Napoleon because of his anti-slavery position, and lived, active in politics, until he died an old man of 77 in 1834.

Meanwhile, what had happened to the Hermione? It continued its activity as a warship until it ran aground in the estuary of the Loire in 1793, at which time it was retired.

In the 1990’s a group of intellectuals, passionate about marine history and about the story of the Marquis de La Fayette, decided to rebuild, as an exact replica, the famous Hermione. And in doing so, to honor the history of La Fayette and his association with the War of Independence in the States,

An association was created, called the Hermione-Lafayette with a mission to raise the funds in order to re-build this famous ship.

The idea was to make a new Hermione that would be exactly the same from the outside and in its main structure, but that would have certain modern conveniences to that a crew sailing it would not have to live in 18th century conditions!!

Permission was given to build the ship in the Arsenal of Rochefort, where the original had been built. A huge structure was set up to have working ateliers for all of the things needed; carpentry, cord-making, a forge, sail making. Like the original Hermione, it is 65 meters long, has three masts, the tallest one being 54 meters high. 2000 oak trees were used to make the shell of the ship, all taken from French forests. There are 2,100 meters of sail, made from linen. 400,000 pieces of wood and metal, 1000 pullies.

Instead of 6 anchors there are only two; each one weighs 1500 kg. One goes down to 192m, the other 165 m. Instead of 26 big canons there are 22, and there are no small ones. But there is one big difference in the canons this time: they are not completely open!! If they were, and could be used, then the Hermione would be a warship and under the control of the French Navy. As it is, it is run by a private association.

And, the biggest differences are in the internal equipment. This time, two hundred and thirty years later, there is electricity, there are modern conveniences like plumbing and refrigerators, and more comfortable places to sit and sleep although the majority of the volunteer sailors (men and women this time!) do sleep in hammocks

There is also a motor so that the ship can make it in and out of the port and it is run on fuel. The masts are glued down rather than bolted and finally, instead of a crew of 255 there is now a crew of 80 on board.

The new Hermione was completed in 2014 and in 2015 it made its return voyage to the United States, following the exact path that the Hermione took with Lafayette in 1777. When it arrived in Yorktown there was an incredible celebration and when it arrived in the harbor of New York there was a huge crowd and fireworks. It stopped at every port that Lafayette stopped at, Baltimore, Philadelphia, of course New York, then going up to Boston, and on to St Pierre de Miquelon in the North Atlantic before returning to France. The voyage took five months, from April to September.

Imagine what it must have been like to see this magnificent three-masted frigate, in its bright colors and with the sails and canons out, sail into New York harbor!!!! I would have liked to be there to see it arrive.

Now you can visit the Hermione in its home port in Rochefort. You can climb on board, go down into the hold, see the magnificent woodwork of the captain’s cabin, the tiny spaces where the crew live, and walk around the canons and see the canon balls. You can admire the beautiful masts and the oak siding of the hull and the incredible thick cords that hold up the sails. And you can try to imagine what it was like when there were 255 men in what is really a small space in the hold and a not very big space on the upper decks.

There are volunteer guides on board to answer all your questions and they are very enthusiastic and often they are the crew members who sail out since all of the crew except for the officers, are young volunteers as well.

In 2018 the Hermione undertook another voyage across the Atlantic to the Caribbean and in 2020 it was supposed to begin a voyage to the North Sea and up to Scandinavia. That has now been rescheduled for 2022.

The visit to see the Hermione includes a step-by-step trip through the different stages of its “rebirth”.

Ever since it docked in Rochefort after its voyage to the United States, it has been a huge success. There are over 250 000 visitors each year, and that is growing. This is good, because much of the financing comes from the admission fees, with some money coming from the region.

The Hermione is beautiful and rather impressive with its canons, sails, and masts. This is a fun, and interesting visit to do, and children like it too. There are grounds to picnic on, a shop for souvenirs, and the museum of the marine to add to the pleasure of this visit.

Open from Wednesday to Sunday: Summer open all day, now closed at lunchtime. Check when thinking of visiting it to make sure the Hermione is not on voyage.

Enjoy your visit to Rochefort and to the Hermione! 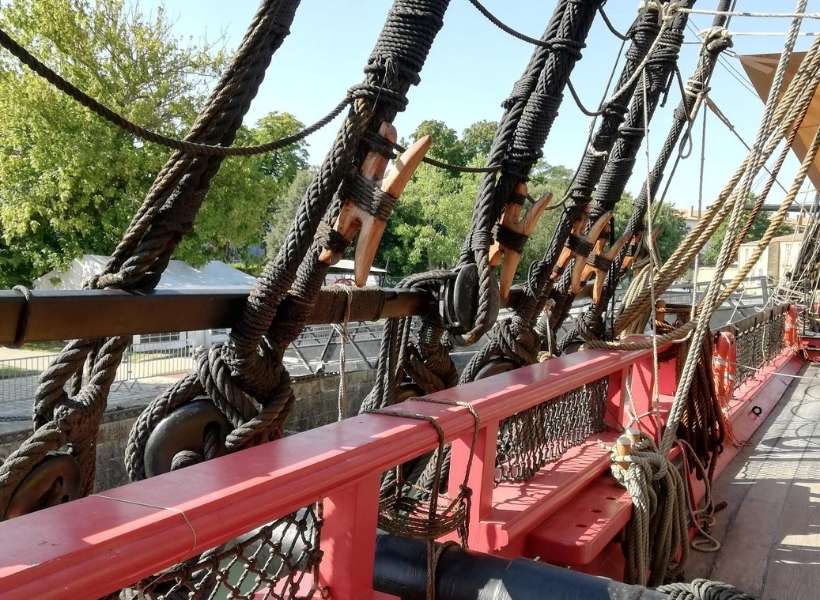