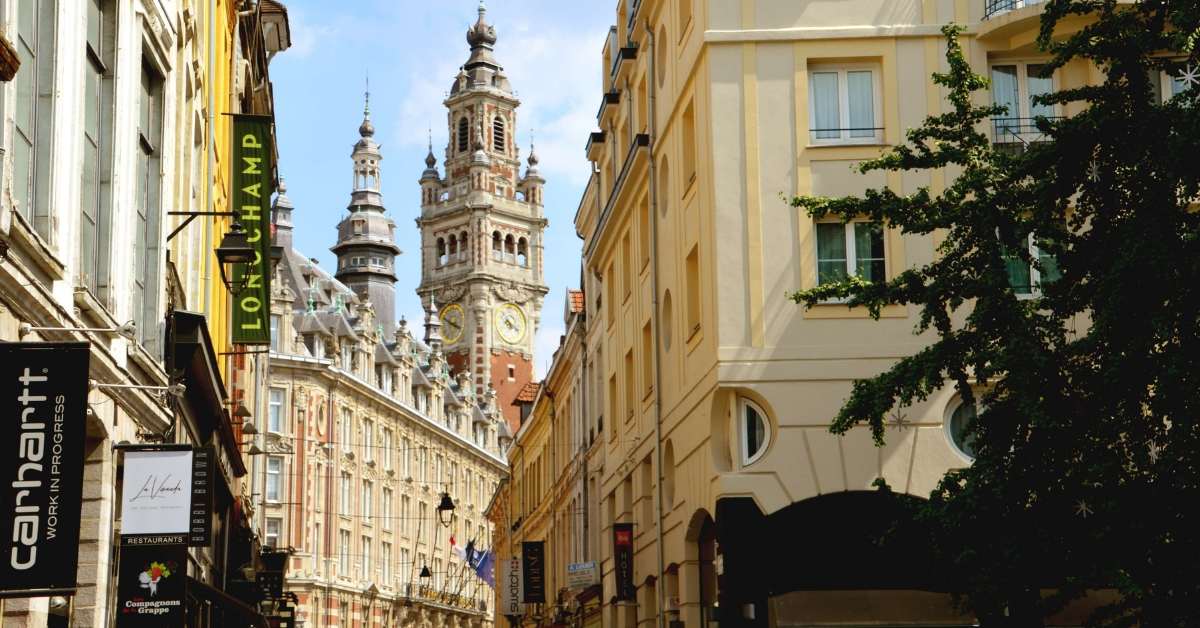 If you're considering a visit to Lille in France, you really need to listen to this episode! Lille is within a few miles of Belgium and it is the capital of a French region called Les-Hauts-de-France. There's plenty to do and see in Lille for a day or maybe two, especially if you're on your way from Paris to Bruges or Ghent.

By taking the TGV from Paris, you could even visit Lille as a day trip from Paris. But Lille is worth an overnight stay if you have the time. Lille is part of French Flanders, but they didn't speak Flemish in the area, but rather a language that sounds more like old French than Dutch.

The architecture in Lille is similar to what you would see in Ghent or Bruges, it's very Flemish in style. The name Lille comes from the word L'Ile in French which means island. The Romans drained a lot of water from the area and turned it from a marshy island area to solid land.  If you go straight west from Lille you get to Boulogne-sur-Mer which is a major port in France.

Historically, Lille was the capital of the Count of Flanders. Remember that long ago France was just a little kingdom surrounded by lands ruled over by either Dukes or Counts.

The area of Lille was invaded by a lot of different groups and tribes in the 800s, then rebuild in the 900s. It was an important center for textile and cloth manufacturing. Then later it became an important area for coal mining.

Lille is the 4th biggest metropolitan area of France. The city of Lille itself is the 6th largest city of France, but if you take the metropolitan area into account, Lille jumps to 4th place. That's because there are a lot of medium-size cities surrounding Lille.

Lille is also a major University town in France and students love Lille because it's a city with a lot of music, cultural activities, and regional identity.

The weather in Lille can get pretty cold because being so close to the sea it is a wet climate. If you go in the winter bring lots of layers! OK, maybe if you go in the summer too, because Lille is cool year-round.

Jeanne de Flandre, Ruler of Lille and All of Flanders

In the 1200s the daughter of the Count of Flanders was Jeanne. She was married off at the age of 13 to the son of the King of Portugal. Within the space of a few months she discovered that her husband was plotting against her father and she helped her father jail him. She started to rule Flanders at around age 15 and ruled by herself until she died at the age of 45.

She was a well educated woman and enjoyed her role as a ruler. During her whole career she advanced the place of women and made sure they were treated fairly. Like Eleanor of Aquitaine and Anne de Bretagne, Jeanne de Flandre had real power. The small kingdom of France didn't allow women to become rulers, but Flandre did!

Béguines were groups of unmarried or widowed women who formed communities of religious sisterhoods without taking up formal Catholic vows. They lived together in order to pool together their resources and help one-another. There were many such groups who were operated like convents. They could teach, manufacture cloth and do business as they saw fit and enjoyed the freedom to escape from women's traditional role as wives and mothers.

You can visit the places Béguines lived and they are coveted today as places to renovate into beautiful apartments. There were béguines all over Flanders and Jeanne de Flandre founded several of these groups that she saw as a way to encourage industry and helping women find fulfilling lives even if they didn't want to marry and be mothers.

Jeanne de Flandre only had one daughter who didn't live into adulthood, so it's her younger sister who took over as the ruler of Flanders. This sister wasn't cut out for the task. The sister had a daughter, Margaret who was married off to the Duke of Burgundy who was a very powerful and ambitious man. Flanders were now in the hands of the Duke of Burgundy who tried to make war with the King of France.

There was a period of 150 years with a lot of wars,  increased poverty and suffering. In the 16th century  there was a bit of calm and prosperity in the Lille area. The Reformation did not take hold in Lille which was always a very Catholic city. The few Protestants in Lille left the city to go to areas that were more hospitable to them.

Lille gave its support to the King of France and the Catholic faith, but didn't become part of France until Louis XIV in 1664. Vauban rebuilt the fortifications around Lille and you can go see them today.

During the French Revolution the people of Lille did nothing at all to help the Revolution. This was true of a lot a France outside of Paris, but the desire to continue with French monarchy was particularly strong in Lille.

Lille During the World Wars

Lille was taken over by the Germans very quickly during WW1 and a good part of the old city of Lille was destroyed. Lille was occupied for 4 years in WW1 and again during WW2. Lille was liberated by the British finally in 1944. Lille lived through a lot of hardships because of the two World Wars.

If you're interested in WW1 history, you should visit the Carrières Wellington near Arras, La Caverne du Dragon on the Chemin des Dames, the Canadian memorial at Vimy just to name a few.

There is no coal mining left in France today, but for a long time it was a major industry in the area. The arrival of the railway was particularly beneficial to Lille. As you can imagine, because Lille didn't assist in the French Revolution, it wasn't a favorite of the rulers in Paris. Lille had long periods of economic hardship and yet is a thriving city today.

There was a border fight between Lille and the Belgians and Napoleon setup a military base in Lille in order to keep the city.

A Visit to Lille Today

Here are some things you must not miss when visiting Lille today.

Besides having music festivals almost every month of the year, Lille is famous for its "braderie". The "Braderie de Lille" takes place the first week-end of September every year. It is the largest flea market in Europe and possibly the world. The Lille flea market is so big it takes over much of the city center!

The old Flemish city center "vieux Lille" is really beautiful. The houses are all attached, it's a nice style with a lot of brick and woodwork. Not as colorful as what you'll find in other Flemish cities, but really nice in its own way.

This is one of the best art museums in France, wonderful even for people who don't love museums generally. It as a great collection of relief maps of various regions in France. The museum is in a gorgeous old building that was part of the palace. This museum is definitely worth a visit!

Taverns and Estaminets in Lille

Lille has been a working class city for most of its existence. As a result you will find lots of wonderful taverns, night clubs and cabarets that were really popular with the local population. Lille also had a lot of sports clubs for young people.

When in Lille you need to visit one of the "estaminets". These were originally breweries where people could also buy smokes. Today some of them still brew their own beer, and  also serve food.

Local Dishes You Can Enjoy in Lille

Lille is a beer town, you could try one of the local micro-breweries. But they are also famous for two dishes that fit their cool climate: the Carbonade Flamande et Chicken Waterzooi, as well as Moules-frites, of course!

When in Lille you should try the local dish called Carbonade Flamande. It's a beef and dark beer stew. Something like boeuf bourgignon but with beer instead of wine.

The Waterzooi uses the same vegetables as pot-au-feu, but it's made with chicken. It's a wonderful winder dish and a specialty you'll find in a lot of areas in Flanders.

They just call it Welsh in Lille and it is melted cheese on bread. It's a version of the Raclette but with bread instead of potatoes.

These are the sweet specialties of the area. Tarte au sucre is a basic dough with a little sugar on it. Surprisingly it's not very sweet! Waffles are also huge in the area with large crystals of sugar. You must have at least one!

Muscles and fries are huge in Lille, during the Braderie de Lille they sell it by the truckloads. It's one of my favorite meals, so I can't wait to try it there!

Lille is big into cultural events. People who live there probably have something different to go to every week-end!  They have a huge cinema festival every year, a large Conservatory of Music, a beautiful old Flemish-style opera house.

The major plaza at the center of Lille is the beautiful Place du Général-de-Gaulle. In French we call those "la grand place". The plaza has lovely Flemish architecture, it's really pleasant.

Lille claims to have the largest independent bookstores in France, possibly as big as Powell's in Portland. If you like bookstores, you'll love Le Furêt du Nord. If you've been to both, let us know! Which one is bigger?

A Day in Lille

If you're going to spend a day in Lille, we recommend you stay at one of the hotels downtown so you can walk through the area called "Vieux Lille". You should visit an Estaminet, maybe a Béguine, enjoy local specialties and craft beers. Definitely spend a few hours at the museum Palais des Beaux-Arts. You could also look at what's left of the Vauban fortifications.

If you have a few car and can spare the time, definitely stop in the town of Arras, the Flemish-style plazas there are amazing! Arras is small but it's well preserved and you can see the best parts in a couple of hours.

Both Elyse and Annie loved the movie Bienvenue les Ch'tis. It was a huge hit in France.

In the movie they speak Ch'ti which is a dialect completely unintelligible to people who are native French speakers. Thankfully they subtitle the Ch'tis parts. But if you watch it as an English speaker, be prepared for a real linguistic challenge! 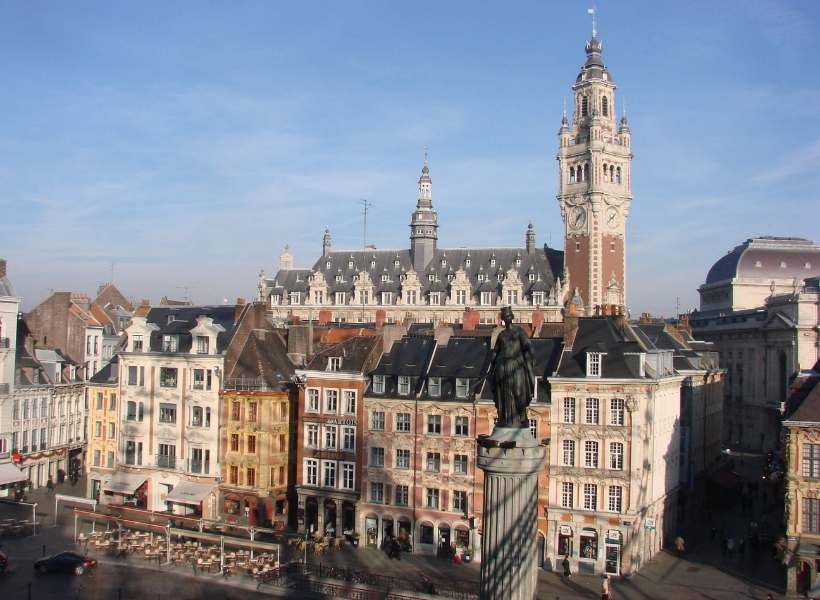 So, are you ready for a visit to Lille Annie certainly is! And Elyse should go again when it's not so cold so she can spend more time walking the streets of the old city center.

And when in Lille there's no way you're going to think that this is same-old-same-old. Lille is loaded with regional identity and looks nothing like Paris or other large French cities you've seen. That's the joy of discovering new parts of France: sometimes you think you've landed in a different country, but you haven't!

Learn More: Episodes about the Hauts-de-France