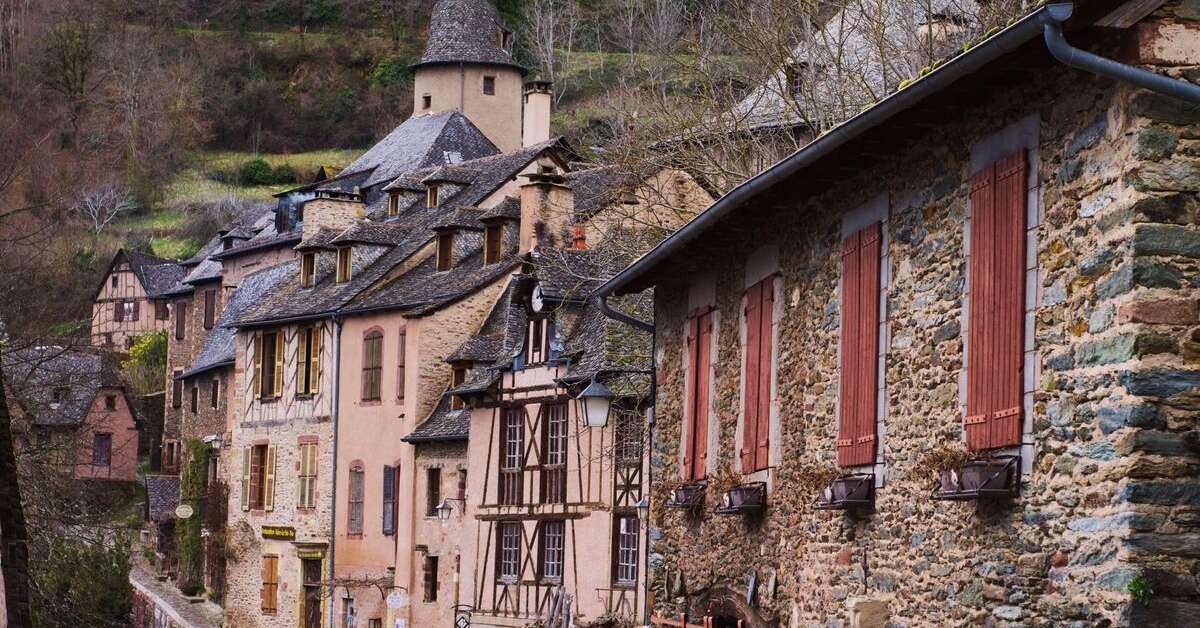 There are treasures in France that are hidden in plain sight. Why? Because they are not in Paris! Today Annie and Elyse chat about Conques, a wonderful village in the south west of France. It’s squarely off the beaten track and totally gorgeous.

Conques (the full name is Conques-en-Rouergue) is a really small village (full-time population around 300 today) that was huge in the Middle Ages. It is in the Aveyron, a 45 minutes drive away from Rodez. It has a huge beautiful Abbey and Church that are a testament to its glorious past when this was a major stop for pilgrims who came to worship the relic of Sainte Foy (Saint Faith in English).

On top of being a Unexco World Heritage Site, Conques is also listed as one of the most beautiful villages in France. What else do you need to know?! The name mean "shell". There are two rivers there: the Dourdou and the Ouche. The area is hilly with cliff formations. The region is quite green even in the summer.

A Brief History of Conques

Conques has a documented history that goes back to the year 500. Charlemagne gave some money for the building of an Abbey where hermits had been. This was a really secluded place, surrounded by woods. Then in the 700s Louis the Pious gave money for a bigger Benedictine Abbey. Then in the 800s it became a place where people stopped along the Saint Jacques de Compostelle Pilgrimage.

The official opening as a Benedictine Abbey was in the year 819. People went to different stops on the pilgrimage road because there was a relic they wanted to pray to. This brought in money as well because it attracted visitors who made alms and used local services.

The Surprising Story of the Sainte Foy Relics

Once upon a time in the 800s there was a Benedictine monk at Conques who went by the name Ariviscus. Conques didn'thave enough important relics. So a young Benedictine Monk by the name of Ariviscus went to Agens where the whole relic of Sainte Foy was (her whole body!) and performed a "translation furtive". That means he stole the relic from one Monastery to take it to another one. Somehow this was not objectionable to the people of the time.

Then they made a "majesté" which is a special box in which you put the head of a relic. In the case of Saint Foy, the reliquary box is golden inside and they put blue enamel eyeballs in the head. People who were blind who came to see this and by touching her regained their sight. Alas, it doesn't work any more. Presumably because you can't touch her now?

Because Sainte Foy had a reputation for giving people their sight back, Conques started to get more and more visitors and in 1041 they build the Abbey and Church we see today. You can still go see the relic of Sainte Foy today.

Romanesque Church with a Colorful Typanum

The church was build up against a hill and the transept is longer than the nave, it's almost a square cross. The village grew up against the monastery. The village is gorgeous and well maintained because of its status as one of the most beautiful villages of France.

It is a steep village. You park at the entrance of the village, but if that parking area is full, you may have to park along the road (which is allowed in this case).

The church was heavily vandalized during the French Revolution, a good part of the Monastery was destroyed, and a lot of the windows were destroyed as well. The reliquary survived.

When Soulages started to study art, at the age of 13 or 14, he came to Conques (being from Rodez, it wasn't surprising at all). He loved the quietude of it and it inspired him to become a professional artist. He was asked to redo the stained-glass windows for the church. They gave him carte blanche and he worked with a glass maker. Soulages' work is mostly monochrome, so for this church he chose to use streaks of grey, leaving a lot of the glass transparent so enough light could come in.

The stained-glass windows do not feature and characters from the Bible, they are all abstract lines. Hence the controversy.

Conques Is Also a Most Beautiful Village of France

Some most beautiful villages of France are really sleepy, but this one is better than average year-round because there activities and an art center there. The scenery is lovely and so is the whole village. Plan on spending some time gawking at the tympanum and try to recognize the different Saints and Kings.

Hotels and Restaurants in Conques

If you go to Conques in July or August when people go there by the bus-loads, you may want to stay there so you can have it to yourself once the tourists leave at the end of the day.

These are the hotels we recommend in Conques:

In Conques Hôtel Sainte Foy: has a parking lot, nice views, AC (in some rooms), and a nice restaurant.

Restaurant Recommendations: Nobody raves about the hotel, but the restaurant is really nice! Restaurant Hervé Busset. 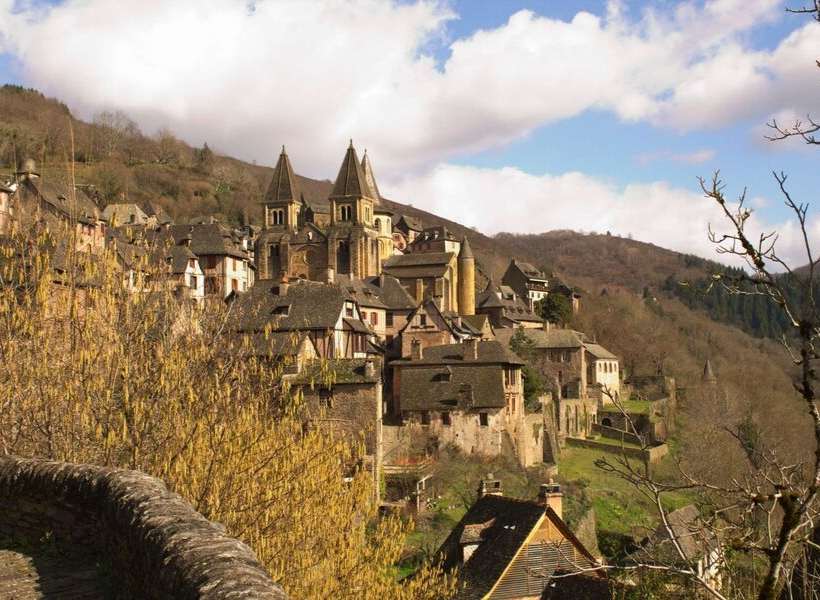