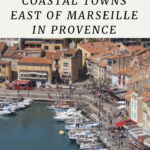 As you exit the large city of Marseille and travel East you’ll run into the Calanques first, then Cassis, La Ciotat, Bandole, the two beach towns of Saint Cyr and Les Lecques, then finally, moving in-land to the medieval town of Castellet.

The “calanques” are a natural white limestone cliff formation. You can discover them by hiking or by boat. There are excursions that will take you by boat either from Marseille or Cassis to see them.

How to Visit the Calanques Using Public Transportation

Listener Michael Groves who spends a month in Marseille every year explains how to take the bus to the Calanque.

“I assume most tourists visiting Marseille will stay near the Vieux Port. From there one will take bus #83 at the Vieux Port, which goes along the Corniche, and a gorgeous ride it is. The bus will eventually arrive at La Plage and turn inland toward Prado. One must get off here (La Plage stop) and cross the street to the bus #19 stop (La Plage also). Bus #19 then will take you further along the coast (more gorgeous views) toward the end of the line Madrague de Montredon. Only here can you take the #20 bus onto the Calanques.

There are several stops for the #20 route, but I go to the villages Les Goudes (my favorite) or Callelongue which is at the end of the line. The restaurants are in Les Goudes. The trip out there is fun and gorgeous. I make sure to stand or sit on the coast side of the bus for the views.

That trip to Les Goudes on busses and a lunch there is one of my favorite things to do. One should go on a nice sunny day, of course. Mid-week is best because many will drive there and the restaurants become full quickly. Although I have not done it, eating a picnic lunch is popular. Many trails and open country.”

The port of Cassis has been known since Roman times, went through being a fishing village and is now a huge tourist attraction. Wine production has been an important part of life in Cassis for a long time. The “Vin de Cassis”doesn’t have a big production, but they produce excellent rosé and white wines.

Unless you happen to visit Cassis on a rainy day in the winter, parking will be really difficult. If you have a rental car, make sure you can park it at the hotel and do everything by foot.

When hiking the “calenques” be sure to have good footwear with good grips and follow the signs, getting lost is all too easy! Divers have enjoyed the Cosquer Cave, but it is not open to all.

La Ciotat, City on the Bay

Cap Canaille is a tall cliff between Cassis and La Ciotat. La Ciotat used to be a working class city with ship building. But being along the coast, young retirees have turned it into a rich city and an important center for yacht building.

La Ciotat is still much less expensive than Cassis with wonderful excursions you can take from La Ciotat going west.

Lumière Brothers and First Cinema in the World in La Ciotat

La Ciotat is also the place where the Lumière brothers opened the first cinema in the world. It was called the Eden Theater and the first movie showed the first train pulling in to the La Ciotat train station.

The Small Beaches of Saint Cyr and Les Lecques

Going further east little towns get quieter and not as hip and popular. Saint Cyr is charming and has a little sandy beach. A little further east is Les Lecques which also has a small sandy beach. By late August they are not very busy and really pleasant.

Bandol and Its Famous Wine

Bandol is famous for its wine, a much bigger production than in Cassis, and they are famous for their rosé. They have some whites too. They make some reds that are considered “vin de garde” or wines that you should keep a few years before drinking.

There is a casino in Bandol, so it attracts a lot of people who enjoy gambling and has turned it into a commercial resort with touristy stores. The city has gotten quite big over the last few years too.

Castellet is a medieval village surrounded by walls and medieval doors. It is not very big but  beautiful inside with a small castle. The word “castellet”means small castle in French.

There are several wonderful restaurants in Castellet. Elyse ate at one called L’Auberge de L’Ormeau that she highly recommends.