During his long, prolific life Victor Hugo produced a total of 50 volumes of writing, in every form possible. He wrote an estimated as 40 million characters.

He was also  interested in art and decoration: he left behind 4000 drawings and books and writing on decoration and photography. His output was prodigious!

Victor Hugo’s House on the Place des Vosges where he lived from 1832 to 1848, is now a small museum in his honor.

Symbol of the Republic and the resistance to tyranny and oppression, he was immensely popular. When he died, his hearse was taken across the city of Paris to be placed in the Pantheon which was declared a secular memorial monument for him. It is estimated that over 2 million people came out to watch the funeral cortege and pay their respects to this national hero.

His Life and Work

Victor Hugo was born in 1802 into a prestigious family. His father was a General under Bonaparte and his mother came from a wealthy Royalist family. The youngest of three sons, he was particularly spoiled by his mother because of poor health as a baby.

Victor grew up in Paris but because his father was a military man, the family moved a lot, and he lived in several countries in Europe, including a short time in a boarding school in Madrid, before going back to Paris with his mother at the age of 10. His return to Paris was connected to a scandal: his mother had become the mistress of another General, who happened to be his godfghtather! This behavior, and that of his father who also had  mistresses, most likely influenced Hugo’s later life when he was known to have a life-long mistress, a wife, and other liaisons as well.

Clearly gifted, he was preparing to study mathematics, but was more attracted to writing, particularly poetry. At the age of 13 he declared that he would be a “great poet’ like Chateaubriand, or nothing at all!

Determined to be a great poet but also very interested in politics, Hugo, created,at the age of 17, a review that was Ultra Royalist (under his mother’s influence). This was the beginning of his political career:  over the years his ideas about what was right and important changed a lot, but his interest in politics was one of the most constant elements of his life.

Precocious in every way, Hugo married at the age of 20. He married a childhood friend and sweetheart, Adele Foucher, who was 18, with whom he had five children in less than 9 years. Four of them lived to be adults.

In 1823 he published his first book, a children’s story called Han d’Islande. And in the  1820’s he became very interested in painting and decoration, having met and made friends with some artists who belonged to what was called the Romantic movement.

In 1827 he wrote his first theater piece called “Cromwell”, and it was written in verse.  Because of his use of verse and his talent as a writer, his work brought him a lot of attention, and notoriety as well. He was attacked by certain critics for his “new” Romantic style ; this meant he used history as a way of explaining both the past and present (like Shakespeare whom he admired), because he used poetry not prose for the theater, and because he added elements of what is called the Grotesque – irony, burlesque, and derision. But, in spite of these critiques of his work, he was in great demand.

In 1830 he wrote Hernani, another theater piece. He became friends with major new composers like Berlloz and Liszt.

In 1841 at the age of 39 Hugo was admitted to the Academy Francaise, an honor reserved for the “great”.

In 1843 Hugo’s daughter Leopodine, who was his oldest, died along with her husband, in a terrible boating accident. She left behind two small children and was only 19. Hugo was so bereft that for 8 years, until he was exiled from France, he did not write. He devoted all of his time to politics and attempted reform. In 1845 he became a Deputy in Parliament.

Hugo defended a shorter work day, better working conditions for children, less repressive laws and, of course, the elimination of the death penalty. For him, the misery of poverty, the oppression of the poor and the greed of the powerful are the main reasons for all that is awful in the world.

Hugo defended a shorter work day, better working conditions for children, less repressive laws and, of course, the elimination of the death penalty. For him, the misery of poverty, the oppression of the poor and the greed of the powerful are the main reasons for all that is awful in the world.

All of his political iideas are, of course encompassed in his most famous work, Les Miserables, which was  published in 1862 and which is a massive work describing the miserable conditions of life at that time.

Prior to that, in 1858, he wrote the famous novel, Notre Dame de Paris. This was written as a defense of the cathedral which was menaced with destruction. In the middle of the 19th century, the city of Paris wanted to “modernize” and Notre Dame was in very bad condition. The publication of the novel helped change public opinion, and was largely  responsible for saving the cathedral.

Both works, it is important to note, were written during his 19 year long exile from France, a period which turned out to be among the most prolific of his life.

Because he opposed the politics of Louis Napoleon Bonaparte (after first supporting his coming to power as the “people’s emperor”) and participating in a radical group that advocated resistance to the Emperor, Hugo was banished from France by official act in 1852. He was considered to be a danger to the government. He went to Brussels with his family after publication of a pamphlet against Bonaparte. After a short stay in Brussels he left, with his family, and his “official mistress, Juliette Drouet, for the island of Jersey. He stayed there for three years. After three years on Jersey, Hugo was forced to leave with all of his family because he had written a tract against the visit of Queen Victoria to Bonaparte in Paris. He and part of his family settled on the island of Guernesey which is just nearby,is  another Anglo-Normand island.

He had sworn that he would not return to France until the day that it really became a republic, even though he had been pardoned. And he did indeed remain in exile for 19 years, awaiting the moment, which came at the time of the Franco-Prussian war, that France would proclaim itself a republic.

So Hugo lived on Guernesey, his wife and children taking care of his affairs in Paris, until 1870, at which time he returned to France.

Hugo the Hero and the Republican

He said, and he did, return to France only when a Republic had been declared. For the rest of his life he continued to write, but spent more and more time on politics and on artistic endeavors particularly photography. His wife, who had lived with, and accepted, his long – time mistress, and his other affairs, who had stayed with him,  and handled all his business and managed his professional affairs, died in -1868 in Brussels. Hugo’s 50 year long time mistress, Juliette Drouet, who had never left his side since they had met, died in 1883. Two years later, at the age of 83, Victor Hugo died.

There are photos you can see that show just how huge the crowds were at the moment that Hugo’s hearse passed through the streets of Paris. He had been lying in state for a day for people to come pay their respects and then the cortege crossed over to go to the Pantheon, where, of course, he still lies.

Through his writings, his activities and his magnetic personality, he represented all that had changed in the 19th century in France. His work, whether in writing or in drawing, is powerful and expressive.  His characters are memorable and have many have become iconic figures in literary history.

Filled with a sense of purpose and an immense confidence in his ideas and talent, Victor Hugo was a monument – what the French call a “monstre sacré” a huge personality and artist. Considered to be the greatest writer of the 19th century, his work lives on and his ideas are still worth fighting for. 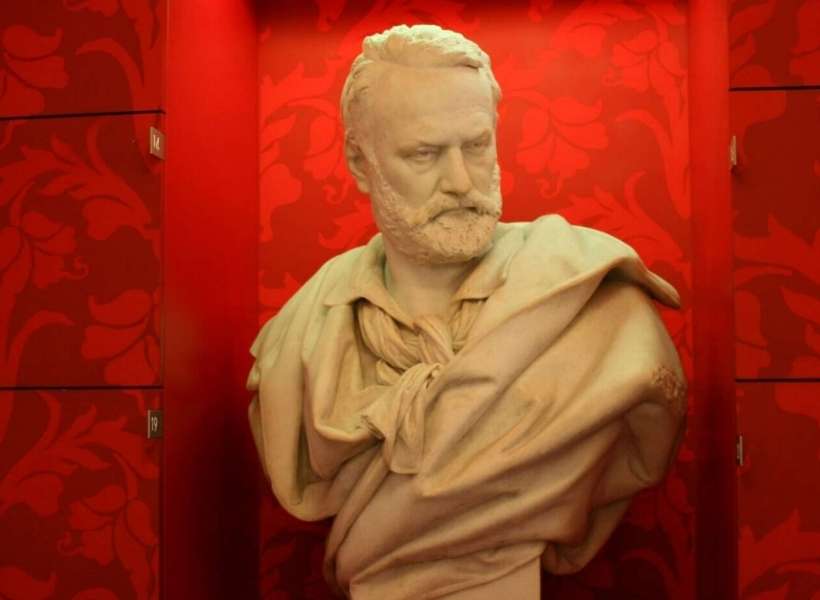