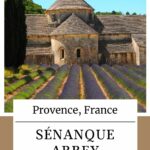 The Abbey of Senanque: Ancient architecture and Lavender

The Abbey of Senanque is a Cistercian monastery nestled in a tiny valley below the village of Gordes in the Luberon. Famous for its architecture and for the lavender fields that surround it, the image of this monastery has become one of the most famous when talking about Provence.

The site is magnificent, deep in a tiny valley but with surroundings that are the essence of Provence. In late June and in July the huge fields of lavender are in bloom. The Abbey itself has a long and interesting history and is a perfect example of simple, Cistercian monastic architecture from the 1100’s.

To get to the Abbey of Senanque you must take the road to Gordes (D900) and then turn to the left just before the village onto D177, direction Venasque. This tiny road takes you down into the narrow valley  of the Senancole, where the Abbey sits. Return is up the D177 on the other side.

All entries to the Abbey are timed visits, it is usually advisable to reserve ahead, especially in the summer season. There is a regular guided tour (only) in French, but there are free, very good Audiopads that are in ten languages and have virtual interactive imagery on them.

Cost is 8.5 euros per adult, a reduction for children. There are a lot of stairs and for the moment there is no wheelchair accessibility, something the Abbey is working on. The visit lasts an hour at most.

There is an excellent boutique where the Abbey sells its own products and other local products as well; all the money earned goes towards the continued, ongoing renovation of the site.

The History of the Abbey of Senanque

The Abbey de Senanque dates from the year 1148. It was founded by a small group of monks who wanted to live a simple life in a remote, secluded spot, far from civilization. For a couple of centuries before that the monasteries  were under the auspices of the order called Benedictine, and there were hundreds of these monasteries everywhere in France. But over time they had become very rich, very corrupt, and were far from the model of poverty and hard work that had been the original idea. A monk, Bernard of Citeaux, in a monastery in Burgundy, decided to break away from the Benedictine order and create a new, simpler, humbler kind of monastery.

This became the order known as Cistercian, named after his teachings. In the end of 11th and beginning of the 12th centuries there was a huge demand for this simpler kind of monastic life and very quickly many Cistercian monasteries were established;

There were some very strict rules for these buildings, and for this new monastic life, which is one of the things that makes them still interesting to see today. The church of the monastery had no ornamentation of any kind, to make sure the monks had nothing to distract them from their prayers. But, besides the prayers and the physical work in the gardens and fields, and reading from the scriptures. They are supposed to eat in silence and only talk during the reading of scriptures. But they had and still have one other activity. They sang during the services. A cappella. And so the churches were built to have perfect acoustics for their music. This is still one of the most remarkable features of these Cistercian churches today.

The Cistercian monks had a severe and hard life. They had to pray 7 times a day (and still do) and work when they were not praying. These monasteries had to be self sufficient and produce their own food, drink and and sustenance, so they worked the land. In Senanque, the little valley was considered perfect for this kind of life. There is a little river, the land was fertile, and they were far from any village.

Senanque flourished. They produced enough wheat, vegetables and had their own mills. They even produced their own wine. And quickly, the Abbey de Senanque became a model of Cistercian monastic life. And eventually, as had happened before, they  became too successful and too rich, as their production increased.

Two hundred years later, during the 1400’s, because of war and the Plague, the monastery almost disappeared, and by 1439 there were only a handful of monks left (there had been over 200 for a long time). The War of Religion came to Senanque and much of the monastery was burnt or torn down by the Protestant army. Monks were killed or chased away.

Come the French Revolution, and the very few monks still hanging on there were forced out and the land and the buildings were sold in 1792 as ‘national’ property. From the time of the Revolution until the end of the 1800’s, the monastery passed through several private owners. At one time the owner gave monks permission to come back, and then they were chased out again.

What really saved the monastery from complete destruction was the fact that the owner of the land and buildings in 1880 decided to add a hostel and new buildings to bring in some income. But again, with the new law of 1903, separating church and state, the monks were chased out.

Ultimately, it was the French government, in 1921, that insisted on saving the monastery as a historic monument because it was, in spite of the destruction, a perfect example of early Cistercian architecture. It took a long time and a lot of money to begin a full restoration program and several Cistercian monks started living there again.

In order to survive and to continue the enormous restoration work, the monks added the boutique and in the 1970’s, a cultural center was added on to the monastery. This is when the Abbey of Senanque became famous: its intellectual activity and conferences were talked about everywhere. And believe it or not, it was in the 1970’s that the fields of lavender were first planted!

The lavender that is grown there is a cross of two varieties that make the most fragrant and strongest lavender possible; the lavandin  and another called “true lavender”. Since lavender grows all over Provence, and the valley of Senanque was perfect in climate and situation for its growth, the production was a huge success and has stayed so ever since.

Today of course, it is the lavender perhaps even more than the architecture that is a major attraction at the Abbey. In the shop they sell many different products, all of which are connected to the plant. This and the benefits of the sales go to the continued, very costly renovation of the buildings, which includes bringing them up to norms of today.

Today there are six monks who continue to live and work the land at Senanque. They still pray seven times a day, and still produce the lavender and all of its derivatives as a way of surviving. As you visit the monastery and use the histopad, you can see how the monks lived before, and some of the simple modernizations that have occurred since then.

The visit is both a return to the past and a nice whiff and taste of the Provence of today.

Gordes: Queen of the Luberon

The village of Gordes, perched on the top of a rocky promontory, is famous for its spectacular construction and for the view of the valley of the Luberon that it offers.

Gordes is listed as one of the most beautiful villages of France and it largely merits that label.

A good sized village, it has a year round population of over 1500 people and swells to several thousands during the summertime. The village itself has many hotels, restaurants, and has a famous market every Tuesday morning where you can buy typical Provençal products as well as food from local producers.

Gordes is a large commune, besides the village perched on the hill, it includes much of the valley down below, where there are many houses and summer residences.

Included also in the commune of Gordes are the Abbey de Senanque in its little valley, and a historical site called the Village des Bories, composed of ancient stone shelters.

To visit Gordes and the surrounding sites it is advisable to have a car, as there is very little public transportation in this part of the Vaucluse. It is a good base for visiting the Luberon area, with its many small villages perched on hilltops.

To get to Gordes you can come from Arles, from Cavaillon, from St Remy de Provence, from Apt, or from Avignon or Carpentras.

If you plan on doing a day visit on Tuesdays – market day, go early as the parking areas fill up very quickly.

The ancient château is visitable, and has been turned into a center of contemporary art. There is an ancient cellar which is now a “cave” The Cellars of the St Fermin Palace”, where local wines are sold. It is also visitable to see the stone gothic arches and the underground construction.

Advice: wear good walking shoes with no skid soles. The village is all up and down and lots of old cobblestones! And in the summer wear a hat as it gets very hot during the day. Enjoy the village! 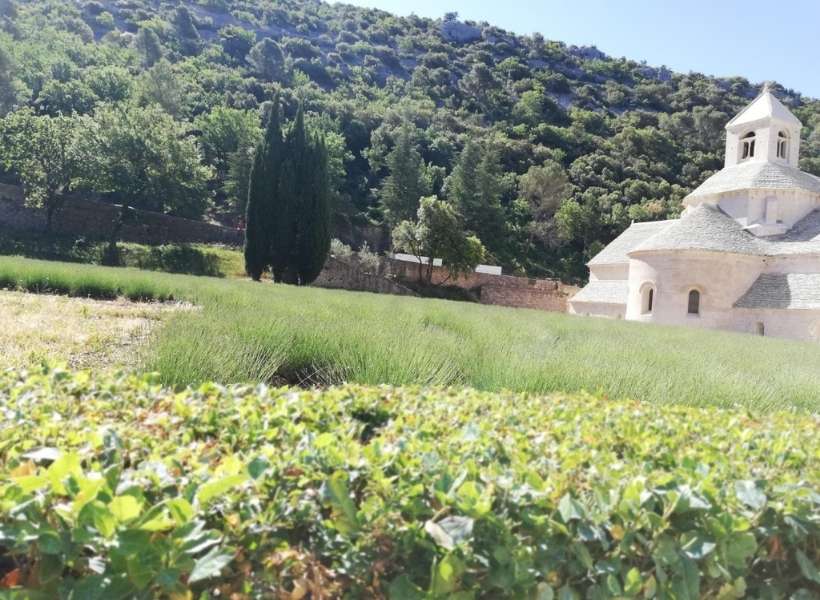