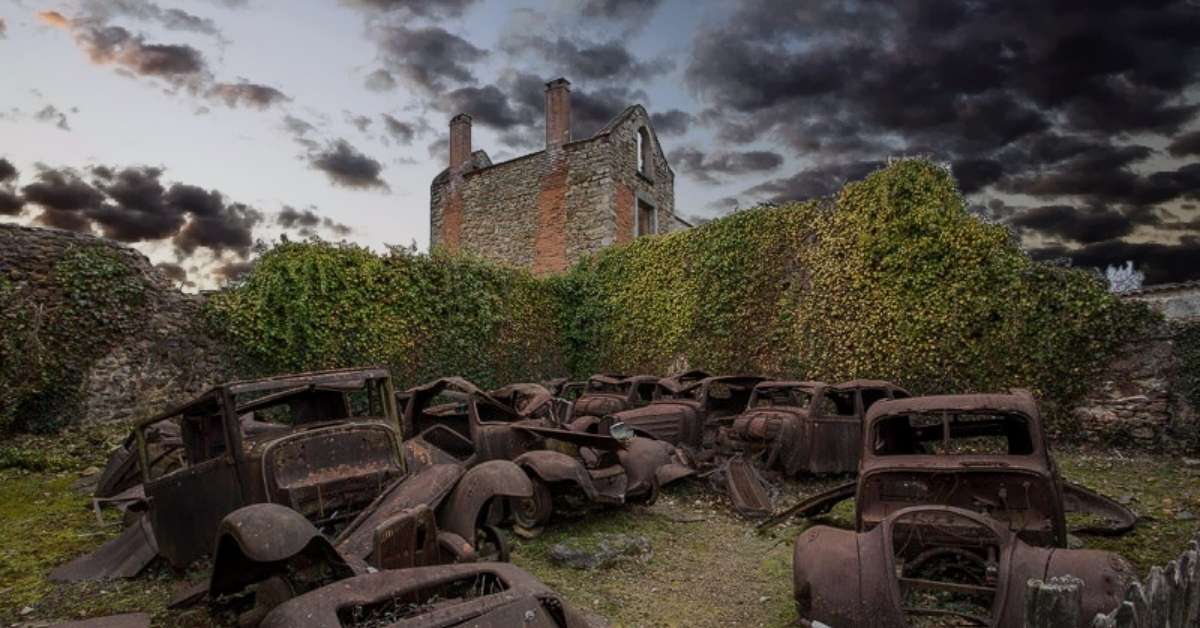 In this episode of Join Us in France we will be talking about a special place that was site of one of the more horrible events of WW II and that since then has become a museum or memorial dedicated to talking about the devastation and terrible acts of war.

Oradour sur Glane is a site and a village about 22 km northwest of Limoges in the center of France, in the department of the Haute Vienne.

RN 147 from Poitiers to Bellac and then toward Limpoges

There are many signs and indications of how to get there once you are in the area.

The Museum/ Martyred Village of Oradour sur Glane is open every day from February 1 to December 15. Either from 9 am to 6 pm or 7 pm according to the season.

Admission to the Memorial Center and Archives is 7.8 euros for an adult or 22 euros for two adults and two children. Special admission just to the underground archival museum is 2 euros. The Martyred Village is accessible by going through the museum entrance and is free.

Oradour was a small town of about 1500 people, including the outlying farms and houses, that was surrounded by farmland and forest and was connected by a tramway to the big city of Limoges, capital of the Limousin region. Famous for its Saturday market and peaceful atmosphere, it was a town that, like many in the southwest of France, had its population double by the occupation of the north of France by the Germans. But, until the month of June, of 1944, Oradour had not suffered much from the war.

Not known to be the center of Resistant activity, even though there were many resistant groups in the forests that cover the region, the Germans had mostly left the town and its inhabitants alone. And that, even though the mayor and the city council were known to be sympathizers of the Communist party and the active Resistant groups like the FFI (the Free French forces of the Interior).

There were several battalions of the SS Panzergrenadiers, part of the larger SS army that had fought on the Eastern Front, that were given permission to have some rest and regrouping in southwest France. On the Eastern Front they had practiced mass executions as part of the “cleansing” program of the Nazis” and this was done under the formal orders of the generals in charge of the SS.

In southern France, they were stationed in small towns close to Montauban and had been there for several weeks, when the Allied Forces invaded the beaches of Normandy on June 6 and 7. All of the SS special forces were ordered to march north towards Normandy to help reinforce the German defenses in the area.

The general in charge of this division of SS gave the order to “create terror in the local population” because they knew that the arrival of the Allies had given courage to the various Resistant groups to take more action. They were told to “set examples” so that the civil population would be too afraid to help the Resistants.

And since these soldiers had already annihilated entire villages of civilians in Eastern European countries like the Ukraine, Poland and Romania, they were prepared to do the same in France.  They were told to make sure that there would be as little collaboration between the locals and the Resistants hiding in the forests as possible.

On the 8th of June, part of the 3rd company of the Das Reich division headed north passing through the small city of Tulle before getting to Limoges and then Oradour.

Heavily invested in resistant movements, Tulle had declared its liberation from the Germans the night before. The Panzer division came through, there was a battle but the resistants were outnumbered, they fled and as punishment the Germans arrested 149 men. The next day they hung 99 of them in the public square.

After setting up a temporary HQ in Limoges they then continued north. On the morning of June 10th they arrived in Oradour.

The Commandant got the local milician (French sympathizer of the Nazis) to annonce that everyone, man, woman, child, old and or sick, had to assemble in the town square. The German soldiers went door to door to make sure that no one was left behind or was hiding. If so they were immediately executed.

They even brought in the farmers from the outskirts of the town. Whatever the local people were told, it was soon clear that they were all prisoners. Then the men were separated from the women and children, divided up into 6 groups, taken to enclosed spaces, and systematically massacred.

The women, children and older people were put into the church which was then locked. A gas tank was set up inside and was supposed to be used to gas everyone there but a spark set off an explosion causing a huge fire that was fed by the wooden interior. People died of burns or asphyxiation: all but one woman, a Margaret Rouffanche, who managed, in spite of being burned, to jump out of the second story eaves and hide in the fields.

All together 7 people survived the massacre: the number killed was counted as 643. One of the 6 men who lived that day did die several days later of his wounds, but the others, including the woman, lived to describe the event in the trial of 1953. The young men who survived did so by hiding under the bodies of those who had been killed. There is still, today in 2021, one person, Robert Hébras, still alive. He is 95 and often still gives commentary to visitors at the village.  Some of the dead were so badly burned that they were never identified.

This was not the only massacre to be perpetrated in France, but it was the worst, and the most savage and horrifying.

Several hours after the massacre the members of a resistant group, the FFI, came and took pictures and recorded what had happened in Oradour. They were able to document the total horror of the event. One month later in July, the local authorities made a historic decision: to keep the entire site of destruction as it was and to NOT TAKE IT DOWN and rebuild it.

This was the only time that such a decision was made and aside from the local authorities, the government was not happy with this decision because as soon as the war ended, there was an official policy of Reconciliation and Amnesty for many if not all of the perpetrators.

This decision on the part of the local officials at first came from a sentment of hate and anger. They did not want people to forget what had been done there. The national government gave the local town and whoever was still living there enough money to rebuild entirely their homes and businesses just a few meters from where the massacre had happened. In 1947 the rebuilding began and was finished by 1949. But no national officials were invited to the opening ceremonies, not ever, and the locals never forgave the insistence on forgetting the past

By the early 1950’s, the martyred village of Oradour had become, for those who could remember, a Place of Memory, a showcase of the horrors of war. Classified as a historical site the local officials realized they would have to act to preserve its integrity – find a way to not have the place overgrown by weeds, not have the buildings fall, or the cars erode to nothing. A major work was undertaken to use resin, to paint, preserve to use anti corrosion products, to hire people to maintain the village and everything in it, exactly as it was on that fateful day of June 10th– in other words, to stop time.

In 1953 a military trial was held in Bordeaux, where 21 of 64 of the German soldiers identified as having taken part in the massacre were judged for their acts. The Commandant Diekmann who had led this company was dead, killed in Normandy, so the highest-ranking officer to be tried was a sergeant. Of those brought to trial, the sergeant and one Alsacien volunteer were sentenced to death. Other Alsacien soldiers were given sentences of between 5 and 12 years, depending on evidence. One soldier was acquitted.

There was an uproar in Oradour because of the leniency of the sentences: The new Amnesty Law had been put into effect in 1953, the government wanted to create a reconciled population. But the locals didn’t see it that way. They put a plaque on the entrance to the martyred village with all the names of the deputies who had voted for clemency. And they decided to create a museum in honor of all the victims of this barbary.

That is how it came to be not just a martyred village – a place frozen in time; but a museum and archival center that documents all that happened at that time. The Center for Remembrance had been created.

This then became, and still is, a center for reflection on the horrors of war, on human cruelty, and on human resistance as well.

The site as it now exists, with a subterranean museum and documentation center, was completed in 1999. It has a complete archive of the massacre, of each victim, and the museum and center are devoted to exhibits about the horrors of war and the massacres that take place, that have taken place, all over the world. The most recent exhibit that ended in September of 2020 was about Rwanda and the massacres there in 1994.

You can skip the museum and just go through the center to the entrance to the Martyred Village of Oradour. It is still exactly as it was left on the afternoon of June 10th 1944. It is a quiet, haunted place. As you walk around you see the blasted-out buildings, the burnt out cars, the ruins of everything that was there including the tramway tracks.

The signs for shops, the street signs, people’s mailboxes – all has been left as it was. The bullet holes burnt wood and the stillness are so strange and moving. No one speaks loudly walking through the village. You cannot come out of there without being moved and it does indeed lend itself to thinking about war and its horrors. 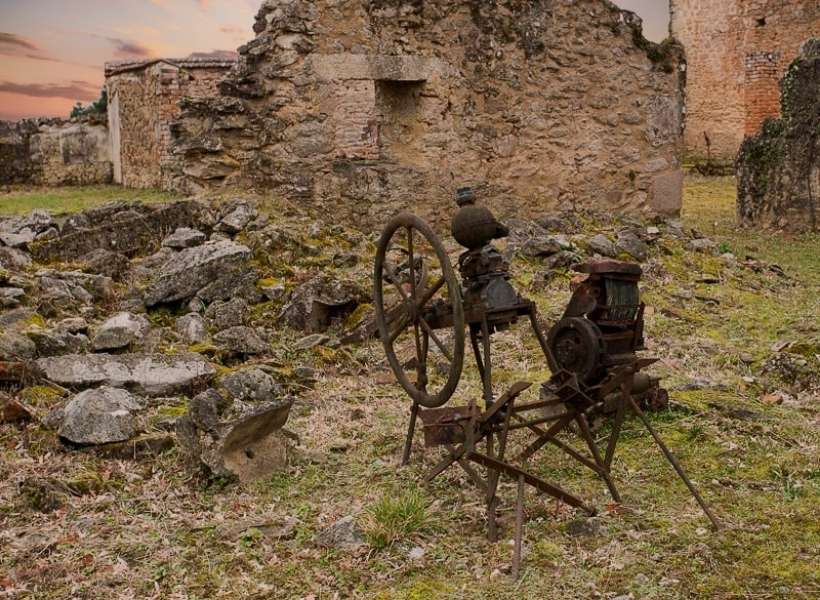