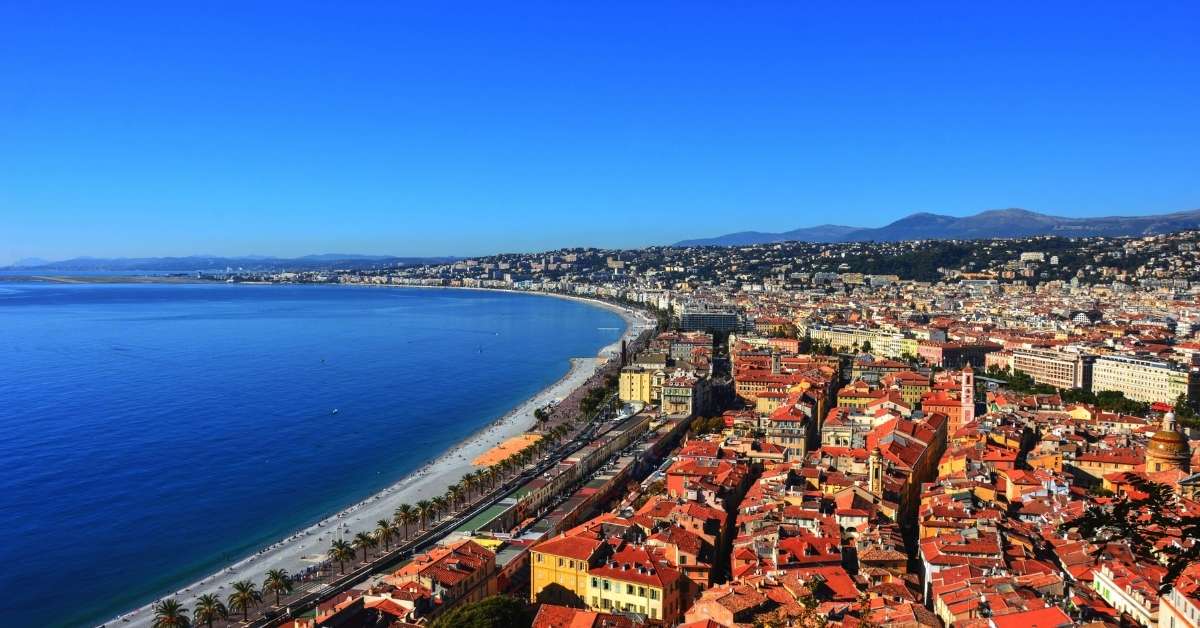 Are you dreaming about visiting the city of Nice on the French Riviera? Welcome to the Join Us in France Travel Podcast where we look around France so you can best enjoy France as a destination. We talk about French culture, history, gastronomy and everything it takes to have a lovely experience in France.

Today Annie Sargent brings you a conversation with Elyse Rivin about the amazing city of Nice in Provence. We love the gorgeous bay and wonderful weather and think it's totally worth a visit and a good place to stay for a few days as you explore the French Riviera.

A Quick Introduction to Nice

A Self-Guided Walking Tour of Nice

Start the day with a visit to the small lovely market of Cours Saleya  in Vieux-Nice. Look at local specialties such as olive oil, spices, tapenade, anchoïade (anchovy paste you can spread on bread or dip raw veggies into), and socca (la socca). You’ll also find food, flowers, it’s small and lovely. If the Chapelle de la Miséricorde is open when you go, you MUST go in, it’s amazing. I will share photos on Instagram @AddictedtoFrance.

Then get lost in the small streets around Vieux Nice, make sure you hit Place Pierre Gautier (this palace houses the local Préfecture and used to be the Palais des rois Sardes), then Place Rossetti with the Cathedral Sainte Réparate and the Fenocchio ice cream shop (with all sorts of strange flavors like thyme, beer, avocado, etc.). Then go to the Palais Lascaris via Rue Droite (narrow and almost straight!), Place Centrale, Place Saint-François, Place Garibaldi, then you could keep walking down beautiful narrow streets all the way to Chez Pipo a restaurant that serves all the local specialties including one I really didn’t enjoy Tourte aux Blettes Sucrée. 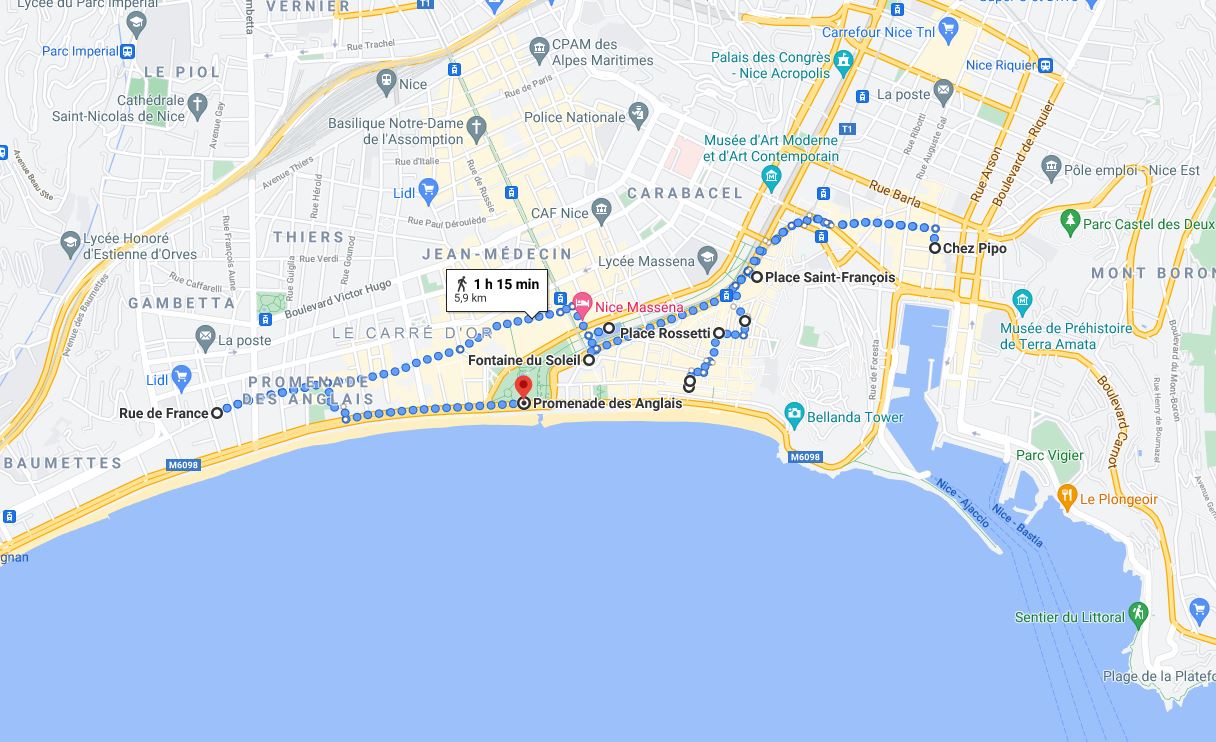 A Primer on the History of Nice

Nice is a very ancient city, originally founded by the Greeks as a trading post in around 300 BC. It became an important Roman outpost guarding the coast and the mountains nearby.

Nice is a city at the border of France and Italy and that has created the conditions for a unique history. It was part of many different kingdoms and countries over the course of 2000 years depending on wars and negotiations. It has been Provençal, Savoyard, Italian, and finally, in 1860, by referendum, because of the chaos of civil war in Italy, became a French territory.

The local dialect, which is a form of provençal, is called nissi in provençal or niçois and is still spoken by the older inhabitants.

Because of its relatively recent identity as an Italian (Genoan) city, the older part of Nice looks very Italian in the style of the buildings and the churches.

Massive changes in its demography happened during the 20th century. First there was a huge migration of poor Italian workers crossing over the border looking for work, then there was a huge influx of Russian immigrants fleeing the Revolution. These are the “white” Russians: largely upper class or aristocratic.

Then in the 1950’s and 1960’s there was a massive influx of ‘pieds noirs” the Europeans who fled a newly independent Algeria where they had lived for several generations (there were approximately 60 000 pieds noirs who arrived in the Nice area).

Nice is known for its Promenade des Anglais, a long boardwalk that stretches 7 km (4 miles) along the beachfront. And Nice is also known for the lovely Old Nice area which includes a section along the seafront and which continues up the hills to the remnants of the ancient fort and some lovely homes and vistas.

In spite of its ancient history, Nice really became “famous” and well known thanks to the English and Russian aristocrats who came to the huge bay of Nice to “take the waters”: to spend time in a healthy climate in the 19th century when bathing finally became a popular thing to do.

Because the bay of Nice is a huge horseshoe shape, and has a sandbar that follows the line of it, it was easy to begin a walkway there. But of course, the famous rich people first built their homes up in the hills where there is a great view of the bay and where is it cooler at night.

There are two famous squares in Nice, one, the oldest, the Place Garibaldi, which is at the northern end of Old Nice, just before it starts to climb into the hills, dates from 1773. The hill there, called Cimiez became the site of some sumptuous homes and hotels including the Alhambra and the Excelsior Regina which was built in 1896 and turned into private apartments in the 1930’s. Before buying a property of his own, the painter Matisse lived at the Excelsior for a while.

The other famous square there is the Place Messina which is on the western edge of the Old City and was first designed in the 1820’s when, under the rule of the King of Sardinia, it was decided to expand and modernize the city. It is a huge, Italianate square with arcades and really is the entry to the ‘new” Nice.

The tramway line was begun there is 1897. At night it is lit up with statues and fountains. From there is it easy to walk to the Promenade.

Now the Promenade des Anglais has many hotels that have kept their original architecture and show just how wealthy the clientele were beginning in the 19th century.

Among the hotels still there are the Hotel West End (1842) the Hotel Westminster (1878) the Negresco, famous for its over the top Neo-Louis 16th architecture (1912) which by the way has been completely restored to its original style, and the Hotel Boscolo Exedia (1913) also recently renovated.

Nice is also the home of the largest Russian Orthodox church outside of Russia thanks to the huge Russian population that still lives there and to some interesting other churches including an Armenian church, a Greek orthodox one and an Italian style baroque synagogue.

Old Nice is a wonderful area to stroll through and where the markets and restaurants are as well. Filled with narrow old streets and ochre-colored buildings, it seems very much like being in Italy.

In Old Nice, there is the famous and wonderful Flower Market and the big street market of the Cours Saleya which is the principal pedestrian street of the old area. A fun place to eat is on the Place Rossetti, filled with lots of terraced restaurants and a famous ice cream maker as well. The baroque looking City Hall is on the western edge of the Old City and the entire area is filled with bars, stores, and some lovely old buildings and churches including the Baroque cathedral.

Nice is home to a large number of museums, the most for a city outside of Paris. There are several art museums for individual artists who lived in Nice at some moment of their lives. There is the Chagall Museum, the Matisse Museum, the Museum of Art Naif, and the very important Museum of Fine Arts built in 1878.

There is a huge Contemporary Art Museum connected to the Fine Arts School of Nice, and there is an important Asian Art Museum as well
Besides the art museums, there is a Museum of the Resistance, a Natural History Museum, and a rich Archeology Museum (on the hill where there are Roman ruins). There are also many art galleries. There is an Opera House and a large National Theatre.

There is well known Carnival every year at Mardi Gras that was begun in 1873. A huge Jazz Festival on the Cimiez Hill every summer. And a festival of chamber music called the Nights of Music in Nice.

Finally, no episode about Nice would be complete without mentioning the foods that are associated with the city. There is of course, the famous Salade Nicoise made with tuna, potatoes, anchovies and green beans among other things.

There is the Socca, the famous crepe made of chick pea flour, the Pissaladière, the local equivalent of a pizza made with onions and anchovies, the Panisse, a fried dough made from chick pea flour, the Pan Bagnat, a round bread stuffed with tuna, egg and salad and several Provençal dishes that are popular there such as the ratatouille, the tapenade, and the pistou. And of course, being a seaside city there is much fish and seafood as well.

Links to Things Mentioned in the Episode

Altogether, Nice Is a wonderful place to visit. It is a city that is beautiful, rich in history, architecture and culture and unique with its Old Center that is so Italian in look and spirit. And Nice is a wonderful place to stay as a base to visit the villages and towns in the hills above it, of which there are many that are worth the trip.

Next week on the podcast an episode with Elyse with great tips for older visitors in Paris. And these don’t just apply to older visitors, they will also be helpful to anyone with mobility issues or anyone visiting with young children, because young kids like older people have their limits. 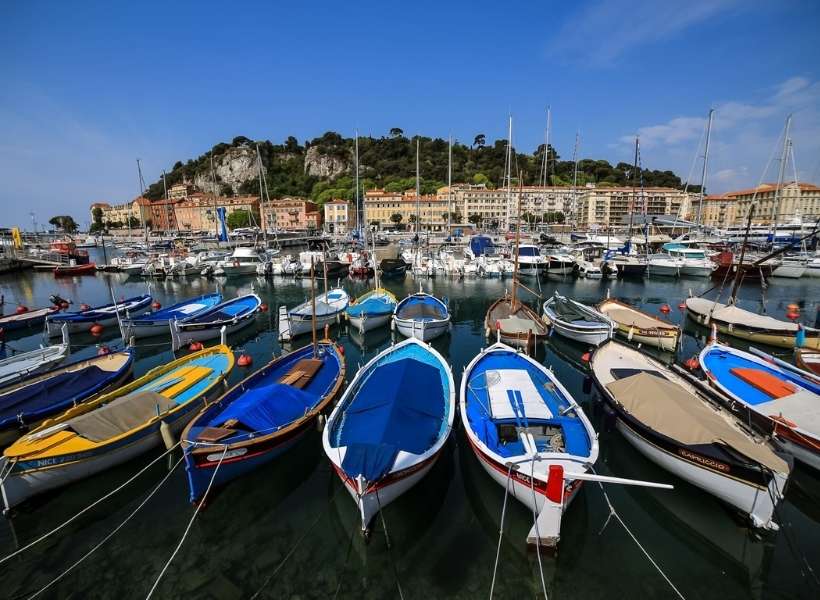