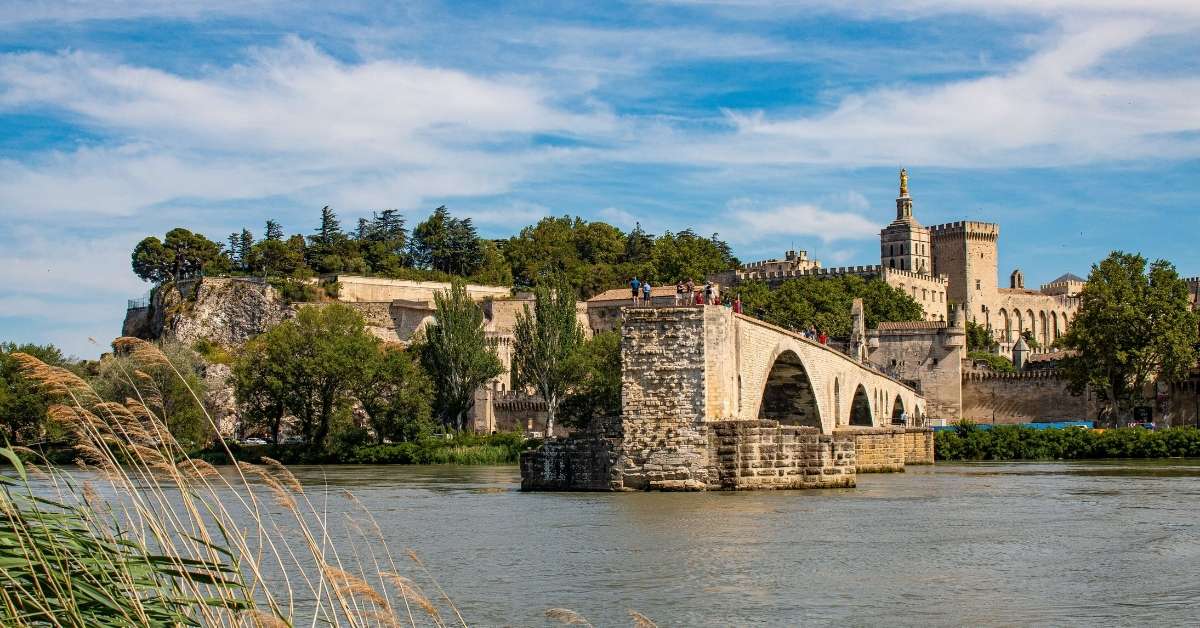 On this episode of the podcast, Annie Sargent and Elyse Rivin discuss Avignon and all the things you should not miss there.

Avignon is right at the border between Provence and Occitanie. It's about the same distance to Marseille, Montpellier and Aix-en-Provence (a little over an hour by car) and 40 minutes from Nîmes. It is in-land with the Rhone river on one side and the Durance on another.

Provence is full of quaint villages but Avignon is a city with a metropolitan population of around half a million and the city proper around 90,000. It is the 16th urban area in France and growing.

The first mention of the city dates back to 400 BC because it was associated with the Greek colony that founded Marseille. It was a great place for commerce because it is at the confluence of the Rhone and the Durance rivers.

When the Romans invaded France they made Lyon their capital. Avignon is directly south of Lyon via the Rhone river and the Durance provides an east-west route, making Avignon a busy commercial area.

The city of Avignon started to become Christianized as soon as the Romans left. This had a big impact on the balance of power in the area. Keep in mind that France was not a unified country at the time. Instead, there were different powerful regional leaders fighting for the prized morsels.

Eventually the Count of Provence took over this area and fought very hard to keep it under his control. He built a palace on a rock not far from the river, at the rock of the dome. This original palace is still where the current Pope's Palace is. Then he built ramparts to protect his palace and the original small city.

In the 1200s the area was fought over between the Counts of Provence and the Counts of Toulouse who were cousins, of course. It is surprising but the city sided with the Cathars.

The Pope's Palace is the largest Gothic structure left in the world. It is much bigger than any Cathedral. The ramparts are also still all there.

There were 4 Popes between 1309 and 1355 and each of them decided they needed a brand new palace and that what the previous Pope had built was not enough. Each one rebuilt and enlarged, adding wings, extra floors and gardens.

Today the palace is 6,520 square meters, 54 times bigger than the average French home! In square feet it's 57,600. This is not a dainty palace but rather a fortified palace. By 1355 they also had a second set of ramparts that are 4 kilometers long and that's what you can visit today.

After the Popes moved back to Italy the palace became the property of the Archbishop. In 1791 right in the middle of the French Revolution Avignon became part of France.

The whole area is a UNESCO World Heritage site and has been so for at least 40 years.

Avignon Belonged to the Popes

Between 1300 and 1791 Avignon did not belong to France but belonged to the Vatican. This was a gift from the Count of Provence to the Vatican. When the popes felt unsafe in Rome due to political strife, they moved to the other area they owned: Avignon. And thus, for a little over 100 years the Popes were French and lived in "France".

There were nine Popes who lived in France from 1309 until the begining of the 1400s and 7 of them were French, some from Occitanie.

Have you heard of the song Sur le pont d'Avignon? We like this swinging version of it! You should walk on the bridge even though it's useless as far as bridges go since it doesn't make it all the way across the Rhone river!

The history of bridges is important for this area. The Romans built the first bridge over the Rhone and this was difficult (even for the Romans who were great engineers) because the river is so wide in Avignon. The first bridge was made of wood, as was the norm at the time. That bridge didn't last long and was replaced by several new wooden bridges.

Because Avignon is situated on a river which provides fairly easy access by boat, it  was subjected to a lot of different invasions from different groups.New invaders often burned an existing bridge and built a new one. But they were always made of wood.

This festival is one of the biggest in the world for theater and performance. It was started at the end of WW2 when France was in dire need of a morale boost. In 1947 a couple of local poets and artists decided to start a theater festival and they invited Jean Vilar to assist them because he was already famous in Paris. The idea was to put up a couple of plays right there on the plaza in front of the Pope's palace.

He put on 3 plays over 1 week the first year and repeated the event the following year. It has now become the biggest theater and performance festival in France. The name "Festival d'Avignon" only came about in 1954 and by the 1960s it had extended to a full month. Now there's an "in" and "off" festival and there are thousands of shows. In 2019 they had 1592 shows just in the "Off" festival. Some of these events happen in very small venues for a few euros. You can see all sorts of things at the Festival d'Avignon.

People who love the theater in France would not miss it for anything. It's always in July. If you love the theater, you have to go. The "In" tickets tend to sell out because there are elite theater troops that perform there. Those tickets can be expensive. It is very international now, which didn't used to be the case.

The vibe is really pleasant and popular in nature, especially since the start of the "Off" festival where tickets are cheaper and easier to get.

A bit of warning: there are canals going through Avignon which means there are mosquitos in the warm months. Make sure your room has AC or window screens. The other problem is that floods are somewhat common.

Olive Oil vs. Butter and Cream

To caricature a little bit, in the south of France we use a lot of olive oil and in the north they use more butter and cream. This has been true for a long time and is the basis for the Mediterranean Diet that you’ve probably heard of.

Heavy Use of Plant Foods

The Mediterranean diet makes great use of lentils, garbanzo beans and fava beans. They also use a lot of tomatoes, artichoke, eggplant and zucchini. All are easy to grow in the south of France.

The artichoke is a large plant so I didn’t have any so far in my small vegetable garden, but this year I’ve prepared a strip of grass to grow artichokes. I’ve made arrangements with a guy I know from my walks to install some of his artichoke shoots in a couple of months and I’ll start some from seed too.

Tomatoes, zucchini and eggplant love it in southern France because the temperatures in the spring and summer stay above 10°C (that’s 50 F) all the time. They grow fastest between 18° (65F) and 30C (86F) and above 90 it’s a good idea to provide shade in the hottest parts of the day. Garlic and thyme are the most used condiments in the Mediterranean diet.

While I was writing the cookbook one of the testers reported that she couldn’t find Herbes de Provence at a reasonable price where she lives. I told her she could mix her own. Use thyme, oregano, tarragon, sage and laurel. Other herbs are added in the professional mixes like sariette (which you call savory for some reason in English), chervil, fennel, marjoram (which is a variety of oregano), wild thyme (which we call  serpolet).

And indeed Herbes de Provence is a mix invented in the 1950s by someone called Ducros. Ducros was the biggest brand of seasonings in France and I remember the add the company ran when I was a kid: pensez-y sinon à quoi ça sert que Ducros il se décarcasse?

He made two mixes that got popular Salagou and Herbes de Provence. And just like curry, herbes de Provence is a mix and no two brands make it exactly the same. Next time you visit France buy a few different brands so you can compare them. It’s cheap in France btw because there’s a lot of competition, even store brands make their own.

What are the signature dishes of Avignon?

Daube, aioli, ratatouille and its variation the tian de légumes. For a long time they ate a lot of mutton in Provence because that’s the animal that adapted best to the climate. You don’t see pasture full of cows in Provence, right? Sheep do great there.

In the 1700s there are stories about how people from Paris were surprised to see mutton in everything: mutton soup, mutton chops, concoctions made of mutton feet, mutton head in a vinegar sauce, roasted mutton tail, etc. It’s not like that any more, but they still use that meat more than in other places. For example, Daube (which is usually beef, carrots and red wine) is made with mutton and white wine in Avignon and they call it carbonade.

They do a croustade in Avignon. In the southwest croustade is an apple pie. In Avignon it’s a puff pastry with lamb, pork sausage, shallots, olive oil served with Chateauneuf du Pape! Dried fruits are also big in Provence at Christmas and any other occasion.